Home » Off The Grid » An Aerial Recon Multirotor for Airsoft Games 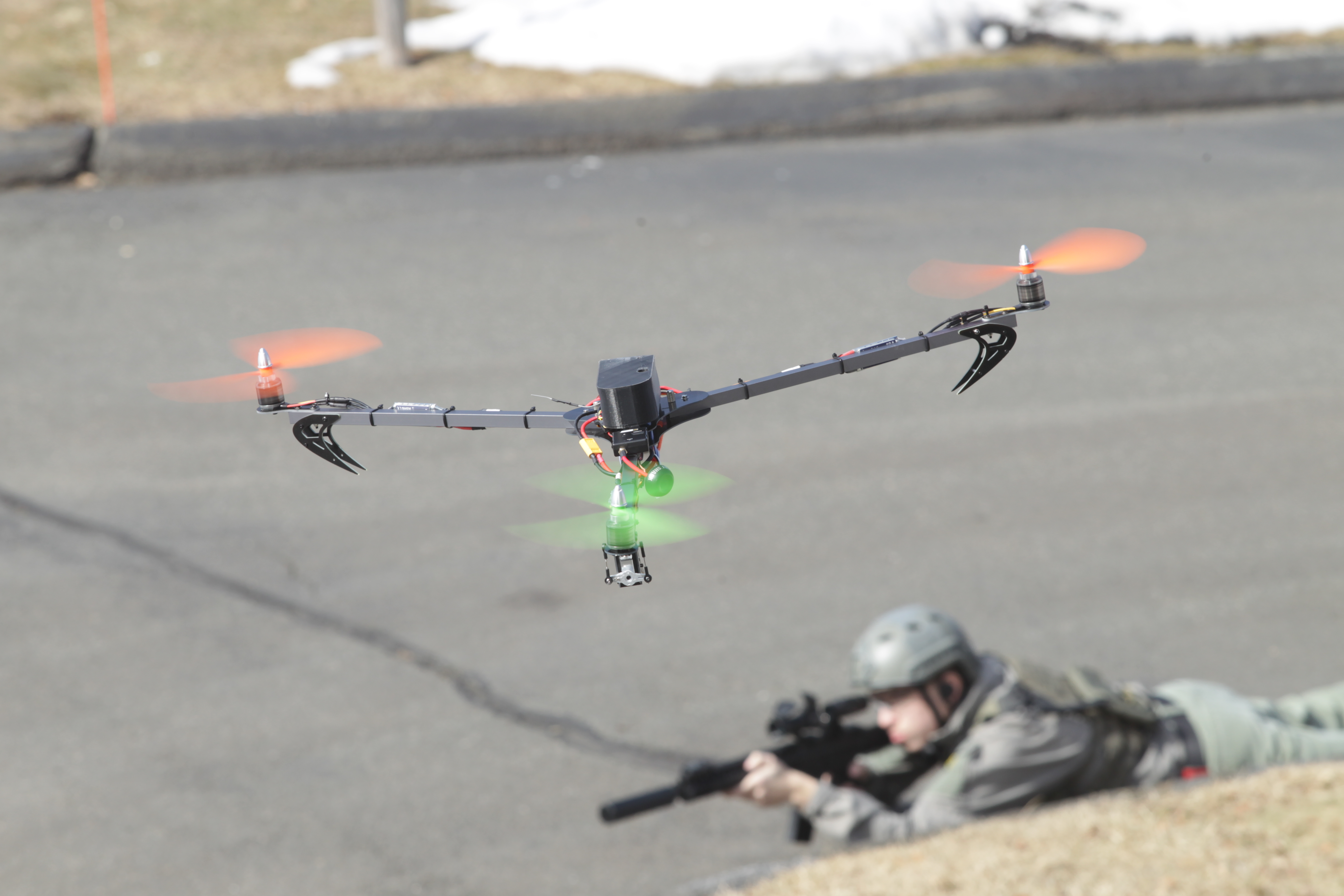 Last year we launched a new publication called Airsoft Insider and we have a team of editors and contributors that are experts on the game, equipment and strategies. One common aspect of the game that I hear them talking about is recon; being able to have a one-up on the competition as to their location and directions that they might be moving. Jimmy Beckett, our lead editor, came to me with an idea; to use a multirotor with a camera to obtain an aerial view of the playing field and gather intel so the operator can relay that information to players on the ground. My first thought was that they do it in the military with real-life “drones” so why can’t we do it on a hobby level?

THE OBJECTIVE
We need a multirotor that will be easy to transport, have GPS positioning, provide a live video feed and be stable to fly. 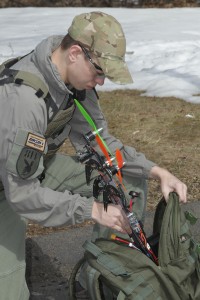 THE AIRFRAME
I wanted an airframe that was large enough to remain stable if there was a breeze but be thin enough to make it a hard target to hit should the enemy decide they want to open fire on it. HobbyKing has the X900 Tricopter which made a perfect platform for this project.  It is foldable, over 400mm from motor to motor and it is able to carry a payload that would include a camera, video transmitter and battery.  The center frame is very small and the bulk of the airframe is made from thin square aluminum tubing.  The X900 has a small footprint in the sky which will make it very difficult to hit from the ground, especially when flown at 100+ feet altitude. 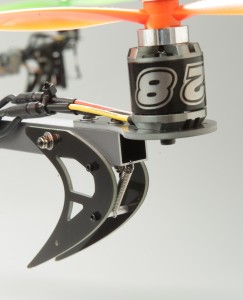 THE POWER SYSTEM
When it came to choosing a power system for the X900, I wanted to make sure I had plenty of power to carry additional payload (cameras, video transmitters, etc.), so I installed three NTM 28-30S 800Kv 300W brushless outrunner motors with three HobbyKing BlueSeries 40A ESCs. With 10×4.5 slowflyer props, these motors each produce 45 ounces of thrust at full power. Since most of my flying will be at 50 percent power, that means I will have a total effective lifting capacity of around 4.5 pounds. The total weight of the X900 as I set it up, including the FPV system and battery, is two pounds and 14 ounces, leaving me with plenty of power to spare.

THE FLIGHT CONTROL SYSTEM
There are plenty of options when it comes to controlling the X900, from a simple, inexpensive KK2 board to the full-blown DJI Naza line of controllers. Since I was using this machine for FPV, I wanted some safety features like position hold and return to home just in case I needed to use them. It is not uncommon to initially get disoriented when flying with FPV goggles until you get used to them and the aircraft. So I chose to use an HKPilot Mega V2.5 autopilot flight controller, which is basically a version of the open source APM 2.5 project from 3D Robotics. The APM 2.5 has a huge online community and support system in place so getting help online is very easy and there are tons of websites detailing how to use the controller and related software.

The HKPilot Mega is an Arduino-compatible controller that uses an ATMEGA2560 processor with an ATMEGA32U-2 USB. The board features a 3-axis gyro, accelerometer, magnetometer and a high-performance barometer, which provides a full six degrees of freedom (DOF) with precise position sensing capability. A  Honeywell HMC5883L-TR Digital Compass is also integrated into the board.

I combined the HKPilot Mega with a Neo-6M GPS module to take full advantage of its capabilities. One very cool feature of this controller is that you can program in waypoints for fully autonomous control to preset locations. Additionally you have the standard GPS controller features, like return to home and position hold which allows the craft to remain stationary in the air when you release the sticks. 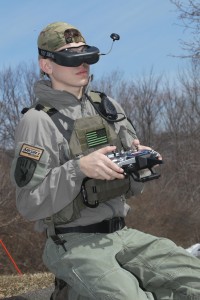 THE EYES
There are a lot of FPV camera systems on that market that you can use for your multirotor. I had some specific requirements that I wanted for this aircraft’s FPV system, including the ability to record a minimum of 720p video to a memory card, the ability to tilt the camera from straight ahead to straight down using a slider on my transmitter and I wanted to use a small monitor on my transmitter with an output for goggles. I was introduced to the RC Logger FPV camera systems at a trade show a few months back and decided that it would be perfect for this machine. 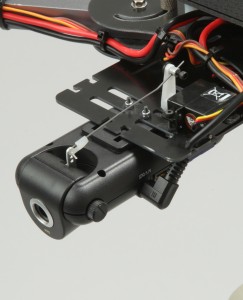 The monitor is 3.5 inches with a crystal-clear full-color display. To eliminate the need for any wires, the video receiver attaches right to the side of the monitor and there are integrated contact points for power and the video signal. If you want to use the receiver with another monitor or video goggles you can, since it has its own built-in rechargeable battery. In the case of our recon machine, the operator will be safe in a bunker out of the line of fire, so we wanted him to have the best possible monitoring device and decided to use a pair of Fatshark Predator V2 Video Goggles.  These goggles block out all ambient light and allow the operator to focus 100% on the task at hand…obtaining intel.

THE SOFTWARE
3D Robotics has two different programming software programs for the APM 2.5 that you can download for free; Mission Planner for a PC laptop or desktop computer and APM Planner 2.0 for a Mac, PC or Linux-based system. Since I have a MacBook, I installed APM Planner to configure and program my controller. The APM Planner 2.0 is an open-source ground station that allows you to configure an airplane, helicopter, multirotor or ground-based vehicle with the autopilot to become fully autonomous.  The AP2 is also used to calibrate and configure the controller, plan and save missions and view live data in flight.

The Mission Planner software will show the location of the aircraft over a Google map so the operator can zoom right into the playing field. The waypoint capability will allow him to pre-program a “mission” by selecting waypoints on the map and then telling the software what altitude, heading and speed to use for each waypoint. This gives the pilot the capability to have the copter fly autonomously while he concentrates on the camera to locate the enemy and report their location back to his team on the ground.  At any time he can take over the controls if need be. 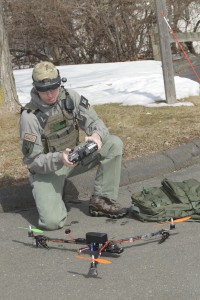 THE CONTROLS
I am using a Spektrum DX18 transmitter to control the X900.  It has more than enough functionality to outfit this machine with more options over time.  One important thing that we did was add a servo to operate the tilt control on the camera so the operator can change his angle of view to look straight ahead or directly below the craft.

IN ACTION
Since the HKPilot controller uses GPS for stabilization, the X900 will pretty much remain where you put it in the air if you take your hands off the controls.  Jimmy has experience flying airplanes and helicopters so getting him up  to speed on the tricopter did not take long at all. Flying FPV with goggles, however, did take some time and practice to perfect.  This is not a machine that you can just build and then take to the next game and have it work effectively, especially since many games are in the woods or urban settings with a lot of obstacles for the pilot to avoid. After about 10 or so flights he had enough confidence to put the X900 into action.  Flying from around 75-100 feet altitude, gave him a very good view of the landscape and by simply letting go of the controls, he could adjust the camera to tilt for an expanded view. In the event that he gets disoriented or the battery runs too low, the failsafe mode will kick in and it will fly itself home where it took off. 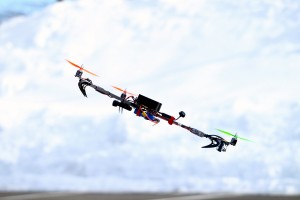 A future flight utilized the Mission Planner software to organize a waypoint mission.  We zoomed into the playing field on the map and selected 5 perimeter locations for the aircraft to fly to. Once we were happy with the “mission” we set the X900 on the ground and started the program.  It rose to an altitude of 75 feet and proceeded to fly to the first waypoint, then to the next and the next until they were all complete at which time it flew back to the home position.

FINAL WORDS
This is not a charge and go system. The X900 comes as a kit and you need to source all the components for it.  The HKPilot board requires some know-how as well to setup.  Our X900 is still undergoing some adjustments to the gains and other parameters in the software to optimize its performance.  However, when you consider that for under $500, you can have a aerial recon multirotor that has advanced features like GPS and waypoint programming, the X900 is one way to give your team the advantage on the battlefield.