This article was originally published in June/July 2016 issue.
By Mike Steidley

When we first got our Connex Mini we were beyond excited to play with the latest from Amimon. Following the success of the original Connex, the Connex Mini is its little brother that packs a powerful punch. The kit comes as a complete solution for wireless HD video and we couldn’t wait to put this little guy through its paces. 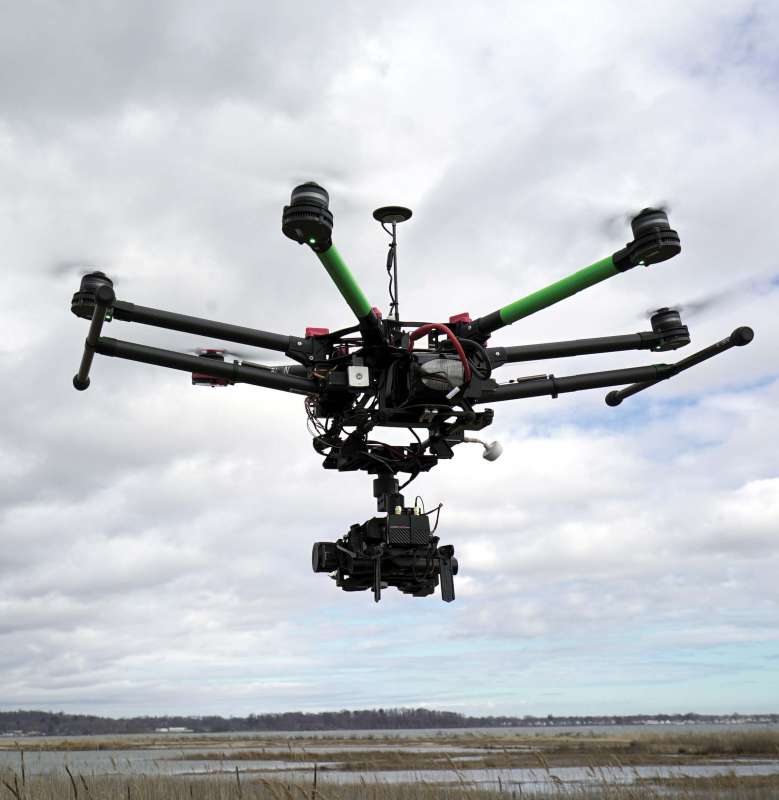 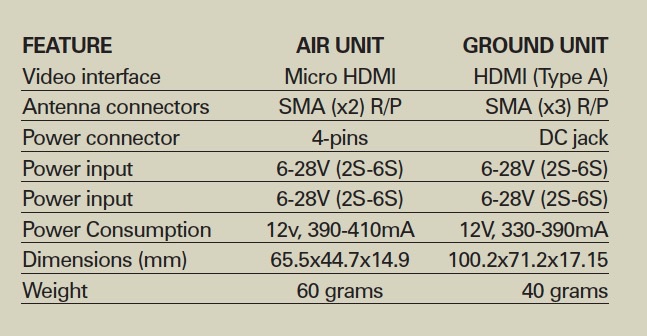 THE BASICS
The Connex Mini comes as a kit with both the air unit and the ground unit and a large selection of cables. The ground unit has two less antennas than its previous version, having three SMA antennas and controls on the side switching the OSD on and pairing the unit. The Air unit is where things get interesting, coming in a very small form factor and weighing in at only 60 grams. The Air unit makes its connection to home base via two SMA antennas that feature a flat panel mounted to two brackets that mount on any circular tube and fit perfectly on landing legs or any other tube you could mount them on. With the option to change the pitch of the antennas, you can be confident that you can bolt the Air unit up in a pinch. I really liked how in the packaging they include all the zip ties and 3M Velcro. What’s even more impressive is the number of cables in the box. Everything you could ever possibly need is included for multiple power options, telemetry and communication with all the major flight controllers, HDMI cables and even a trainer cable. The Connex Mini comes down in price from the original and retails for $1,299. 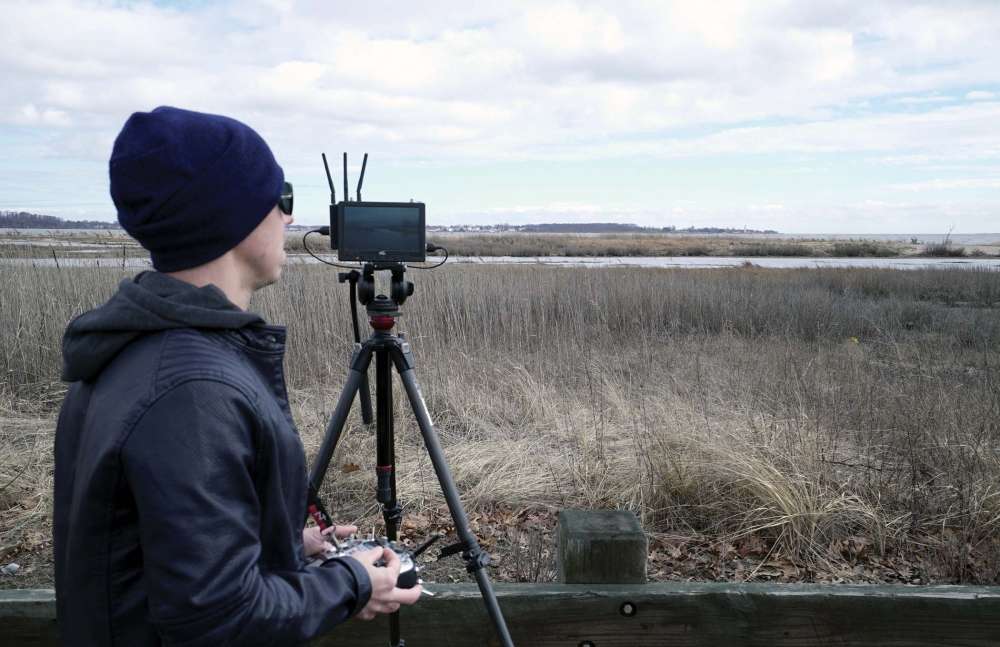 SETUP
For our initial setup we pulled this out of the box and tried it set up on a DJI Ronin. The air unit can take anywhere from a 2S to a 6S battery to power it or you can feed it off the Ronin itself. We were going for quick installation so we just set it up with the LiPo and started playing with it. The first impression was on point with perfectly clear video feed and seamless transition between true life and what you see on the monitor. With some other HD wireless systems we see a touch of lag in the latency. We were able to accurately pull focus and judge exposure without any problems. With the mini mounted to the camera in our studio the next test was to head to the basement. Through four floors of old cement buildings in our loft studio the transmission was fine. The Mini gives an OSD readout of the signal strength so you can check in on it but for any studio type setting we think this will work on set perfectly. We instantly saw all the potential opportunity to use this on a jib and even as a client monitor if needed. However, what we really wanted was to get this guy into the sky. Being able to accurately judge exposure, focus and framing is crucial from the sky and ensures you will never miss the perfect shot. Connex also has a Zenmuse mounting kit available that allows full 360 movement of the gimbals. We decided to mount this rig to a DJI S900 with a Panasonic GH4. The mounting kit gets everything nice and tidy behind the camera. In all the exchange of setups and configurations we tried, everything shared one common trait. You plug the Connix Mini in and it functions; it’s that simple. With the Zenmuse kit installed it was time for the fun part and we headed off to burn a few packs and test it out. Our initial verdict was just as good as on the gimbals, a perfectly clear feed of 1080 video. The Connex supports multiple formats and we set the GH4 to record 4k video and output 1080 HD from the HDMI cable into the mini without any problems. If you want to do live broadcast or take this video feed and plug it into a monitor like the Atomos Shogun you can do so without any problems. The claimed 500m air to ground seemed like an understatement. Most shoots were more in the 200-350m range, but it’s comforting to know that 500m is still rock solid. After a few flights we headed down to the coast to see what happens when you push this aspect. It was a fairly windy day out when testing on the S900. Tracking the coast we pushed out to 1000m and were still in signal range. Moving even further past this the Connex will notify you when you’re approaching the range limit. It also has a ground to air unit measurement that gives readouts of how far the units are apart from each other. The mini really makes flying a heavy lifter a blast as you can get crystal clear video feed and the camera operator really can have confidence in his shots.

With the small form factor you could mount this to quads and connect to a GoPro or even use this as a way to live feed helmet cam video if you ever had a need.

The reliability is there and the system is sturdy. We brought it out to areas where the previous 5.8 downlinks had trouble and also flew in some urban environments without ever having an issue with transmission. 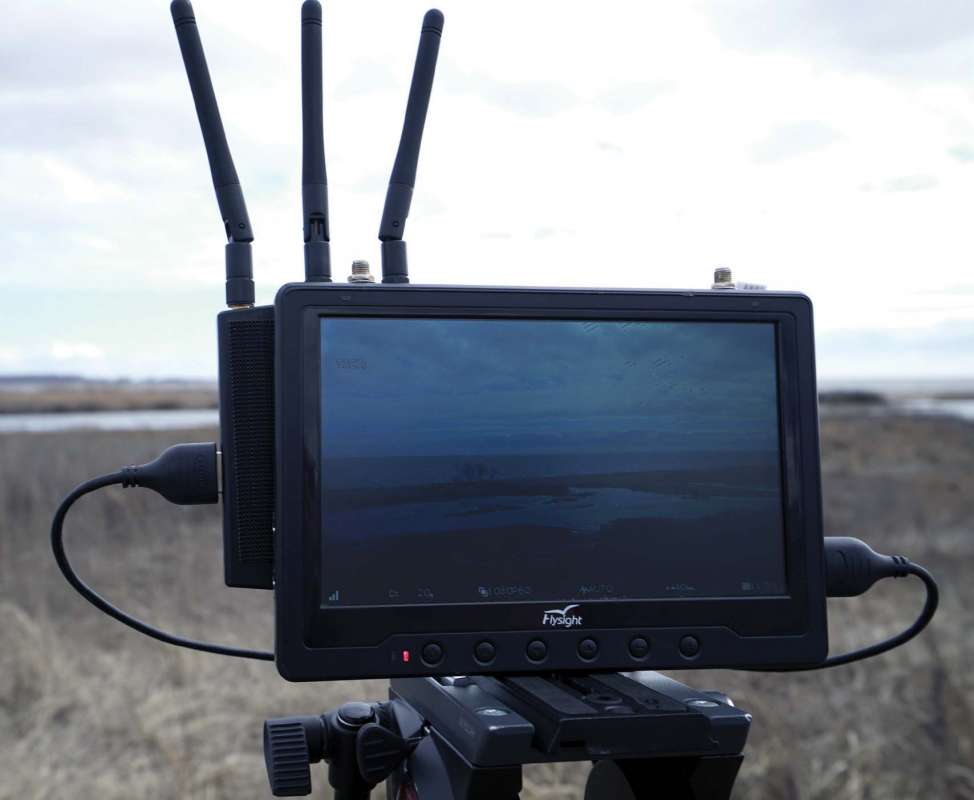 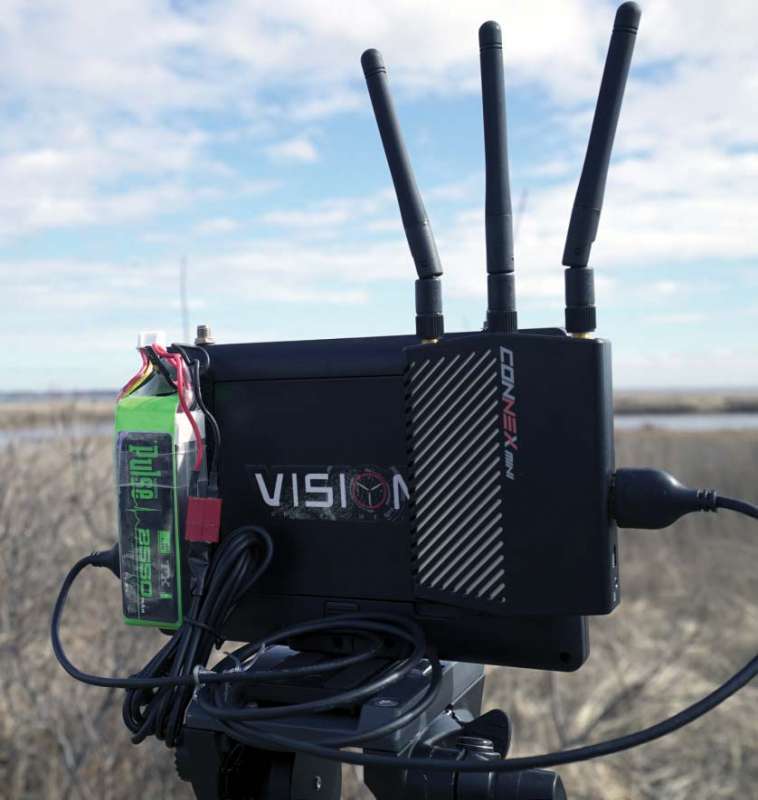 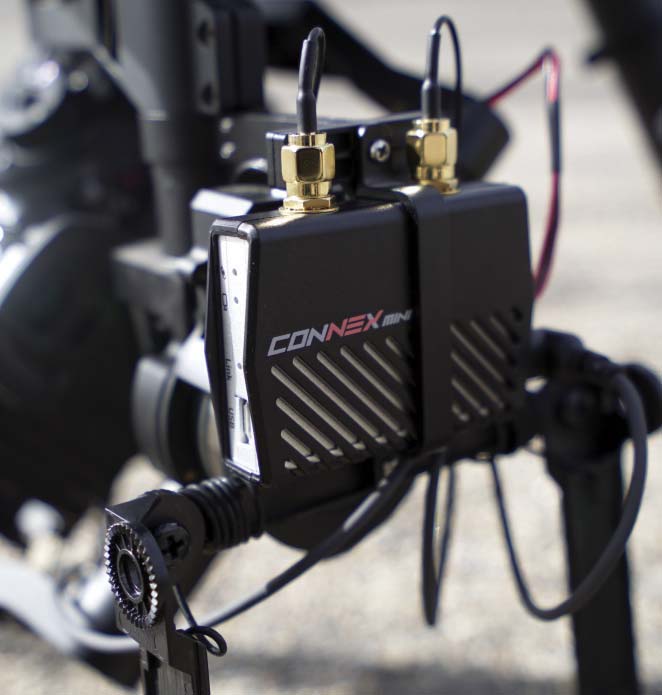 PUSHING THE CONNEX FURTHER
After some incredible flights we were sold on the capabilities of this little unit. A week later we had a shoot with scenes filming a corporate CEO walking through a warehouse. We pulled the Connex air unit off the Zenmuse and bolted it back to the 3-axis gimbal. With the unit being held in with just two bolts you can unscrew the SMA connectors for the antenna and remove it in under a minute. All the extra cables allow you to have the setup ready to roll on the next setup quickly. For the shoot we were filming on the new Sony A7sii in Slog3. You need to overexpose by two stops to get this profile in perfection for post production and it’s normally very tricky to do on a 3-axis gimbal because of how critical you need to thread overexposing completely to get a good shot. We set up the focus and aperture wireless devices and had one camera operator walking the camera, one on focus and aperture and the third controlling the camera movements. The results and ability to do complex shots like this are unmatched by other units and the Connex really is well versed. When you look at the versatility, quick setup change, and usability of this system it’s clear that it’s an investment that will be well worth it and proves its weight on set and in the air. It has the ability to also be connected with almost any flight controller for OSD information and can work with both SBUS and PPM systems. Pairing multiple units is also possible, up to four units, to get everyone working off the same video feed for multiple tasks on set. The Connex mini is one of those products that just works and does its job well, which is extremely important for most of the applications you want to use it for. We are really looking forward to the ease of use with this product on multiple shooting situations and the confidence that comes with a system providing such crisp video without any delay. The Connex Mini has certainly found its place for professional use and passes the test of being a durable and versatile film tool for aerial video production. 