Like many aerial media enthusiasts, we have been waiting for the arrival of DJI’s latest, and perhaps greatest, iterations of the Phantom platform: the Phantom 3 Advanced and Professional. Like any properly enthusiastic hobbyist, we jumped when we saw them in stock and in a day or so had a shiny new Phantom 3 Professional sitting in front of us. For the sake of our readers, we here at MRP are always eager and willing to be among the early adopters! We thought we’d first shoot a few studio photos of the new hardware. 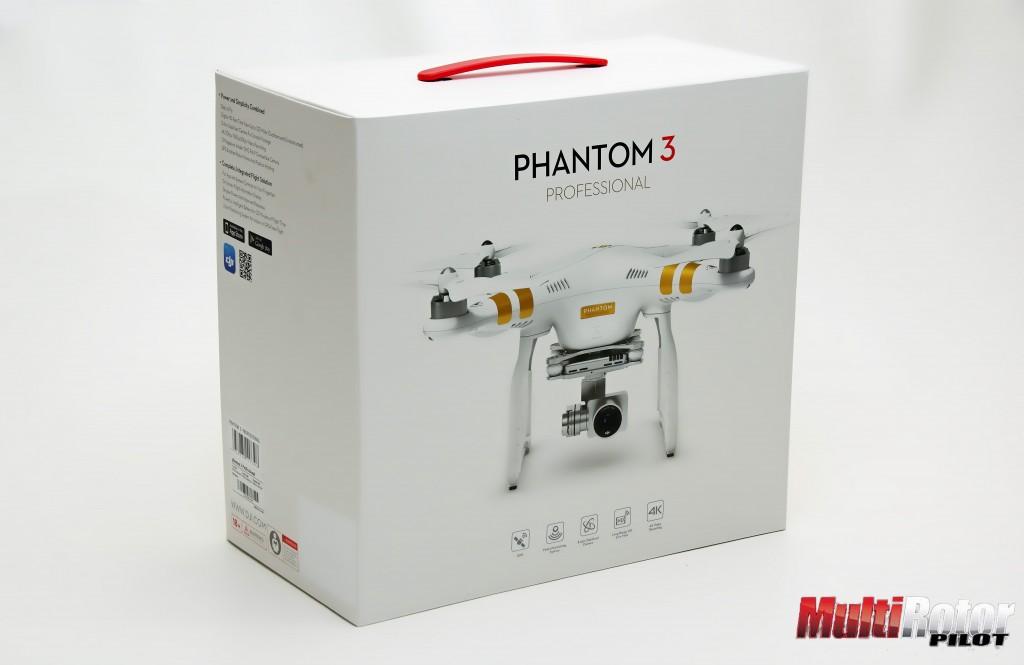 There are two versions of the Phantom 3 available: Professional and Advanced. The fundamental differences are in the capabilities of the included camera. While the Professional camera is 4K capable, the camera included with the Advanced version maxes out at 1080P. Both cameras are good for 12.0 megapixel still photos. And both use a gimbal to stabilize the camera on three axis. 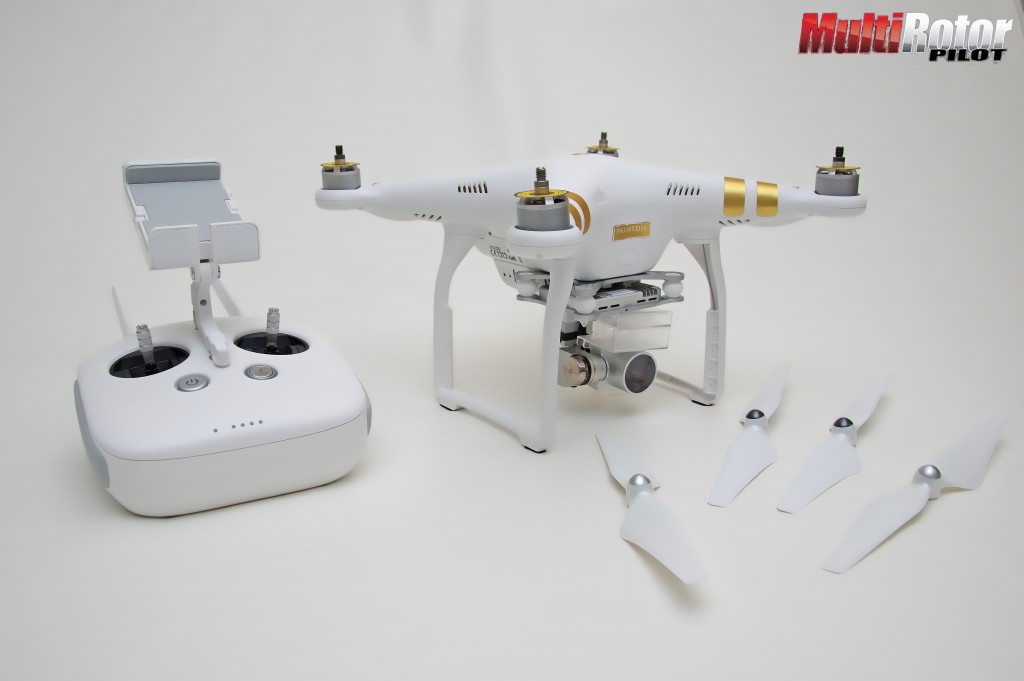 Very little is required to ready the Phantom 3 for flight once unpacked from the box. Two sets of propellers are included in a handy drawstring pouch. The composite center hubs of the props are color keyed to the motor hubs; black to black and silver to silver. The gimbal is protected while in transit using a clear plastic brace and a small white foam wedge. The latter is located behind the camera/gimbal assembly. Both should be removed before flight, as should the thin, clear plastic camera lens protector. It might seem silly to mention this but we have been reading of more than a few pilots who neglected to do so and then complained about perceived and alleged problems with the quality of their video. 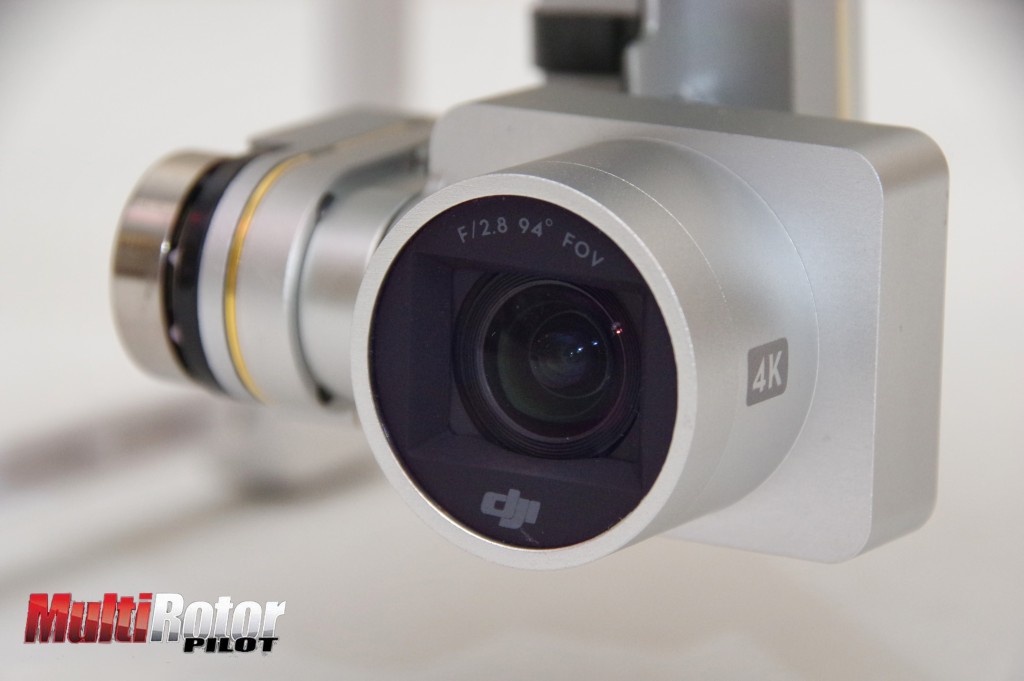 The star of the Professional is it’s 4K capable video camera. DJI has engineered an utterly amazing camera !It features a fast 2.8 lens that has a 94 degree field of view. Our Professional camera can shoot in resolutions of  4096x2160p at 24/25 FPS and 3840x2160p at 24/25/30 FPS. The camera settings can be fully adjusted within the Pilot App. Adjustable parameters include ISO, exposure and shutter speed. The still camera side of things is equally impressive, with a maximum image size of 4000×3000 ( 12.0 megapixel). Still photography modes include single shot mode, burst mode (3, 5, or 7), Auto Exposure Bracketing ( 3/5), bracketed frames at 0.7 EV bias and time lapse. 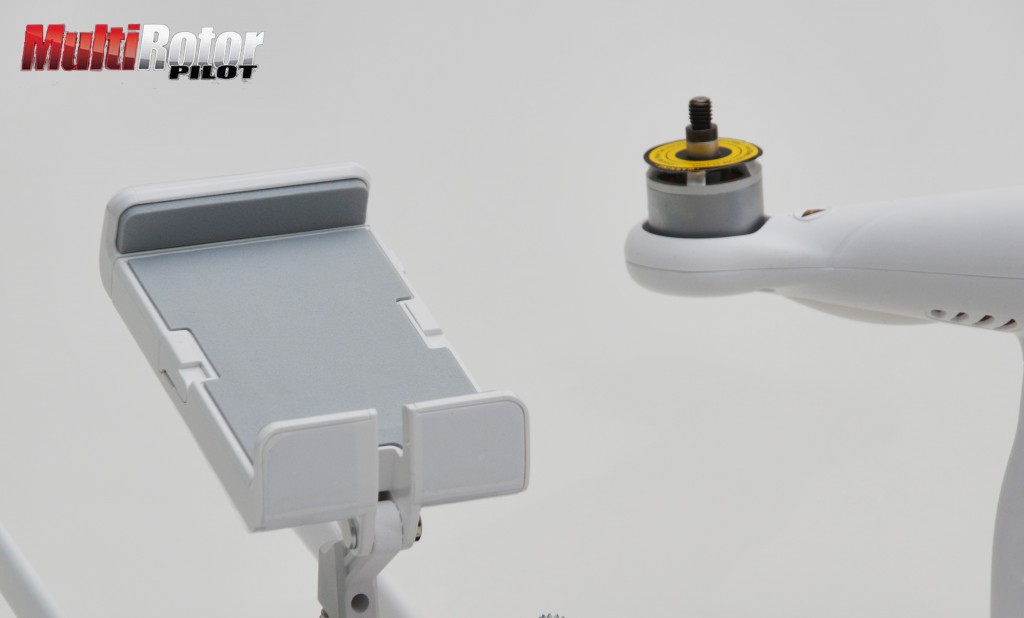 The DJI Phantom 3 transmitter includes an adjustable tray that can be used to cradle a host of mobile phones and tablets. We plan to use an iPad Mini 2 but at the time of our writing this, the iOS Pilot App is only available for the Android OS. We are just not the type of folks to be dissuaded by such a minor detail; acting on a bit of advice gleaned from an online forum we scurried over to our local Best Buy and grabbed a $30.00 Motorola Moto G contract phone. It can be activated without the need to so much as part with even one red cent of our coin. We then switched to Airplane Mode, grabbed the Pilot App directly from DJI’s Phantom 3  Downloads section (the Google Play Store version was reported as not being the latest version) and in a minute or three ,we had the app installed, running and connected! 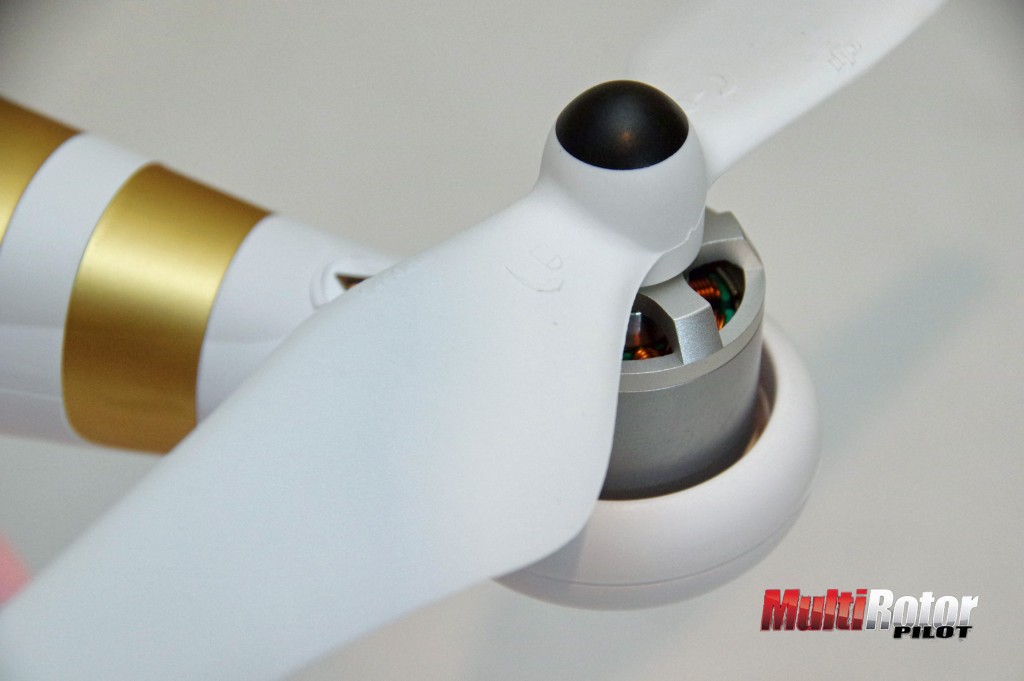 We notice that the propellers included with the Phantom 3 seem to be a much more aggressively pitched design. The chord at the root is substantially wider than the props on our generation one Phantom. The props are self tightening, with a small wrench that fits between the motor spokes being one of the miscellaneous tools included in the box. 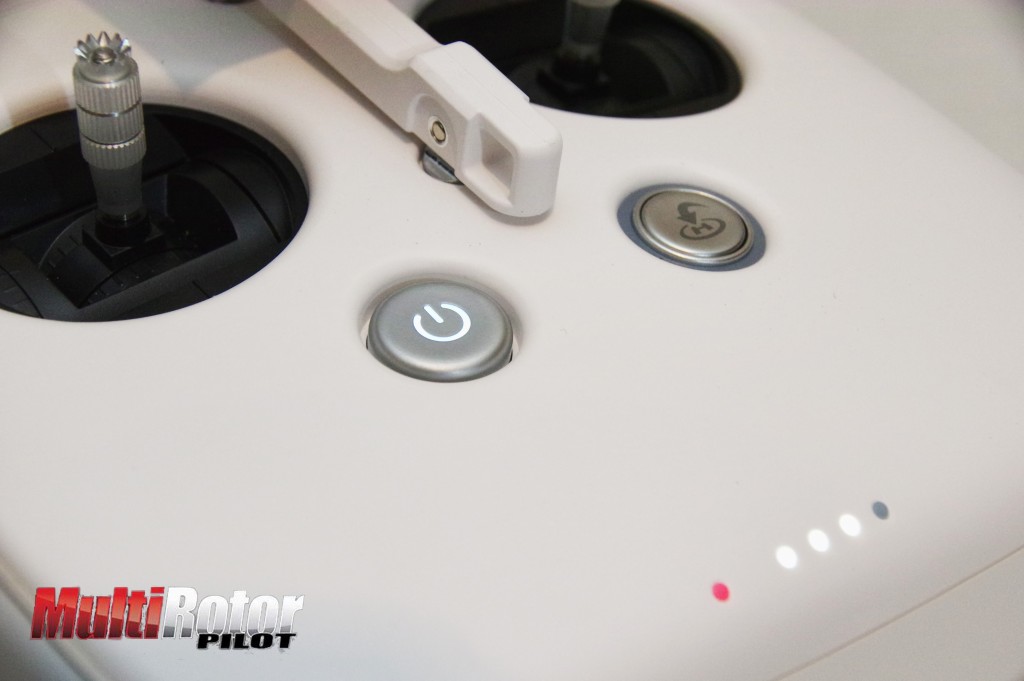 The Phantom 3 controller features a spring centered throttle stick, a dedicated Return to Home button, a spring return gimbal tilt rotary dial and several user programmable buttons.USB ports are the means of connection for the required iOS or Android phone or tablet. 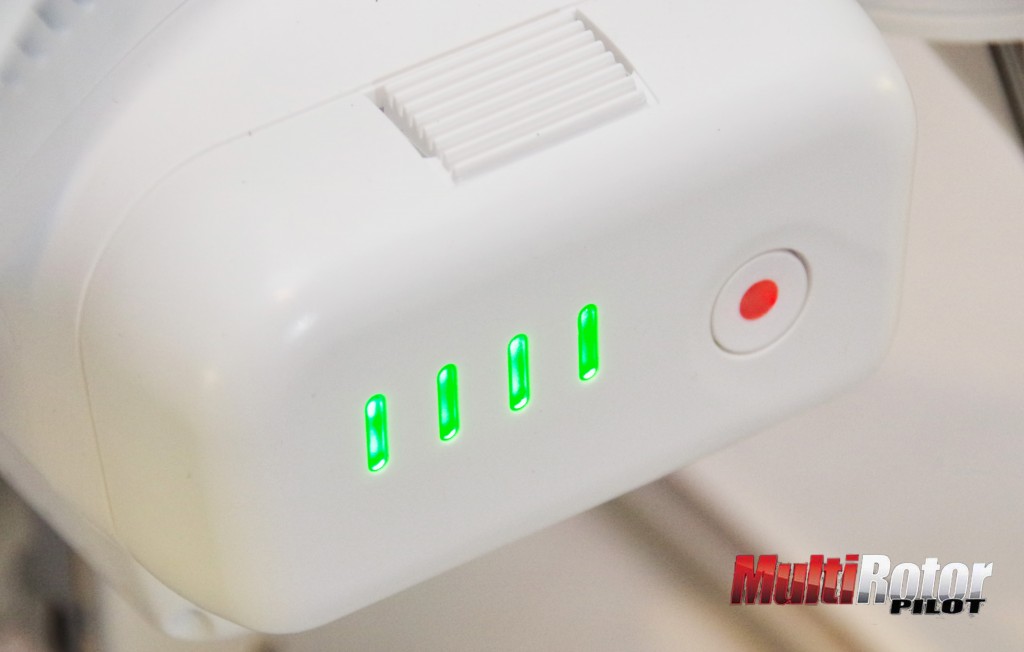 The Intelligent Flight Battery is a four cell pack with 4480mAh worth of capacity. Four green LEDs visibly announce the remaining battery, with flight durations of up to 23 minutes possible according to DJI. 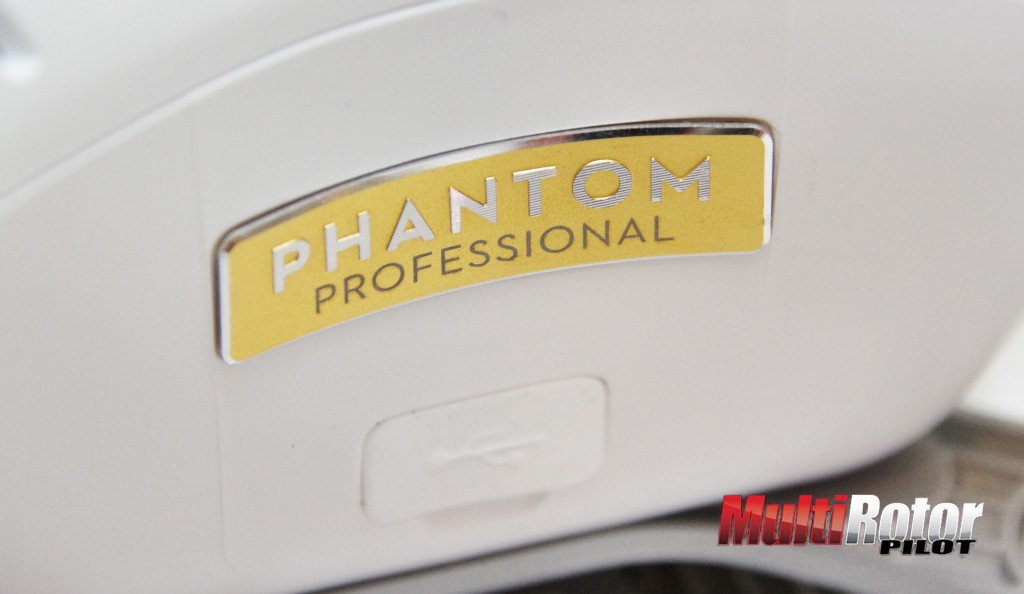 There are SO many new and exciting features in the new Phantom 3 Professional! A Vision Positioning System, Auto Takeoff and Landing, a fully integrated Pilot Application that provides an amazing amount of in-flight information and a 720P real time video feed, etc. Stay tuned as we at MultiRotor Pilot Magazine dive headlong into this exciting new aerial media platform. We have much more to share with you in the days ahead!