This article was originally published in The Drone Mag’s April/May 2016 issue.
By Jimmy Beckett 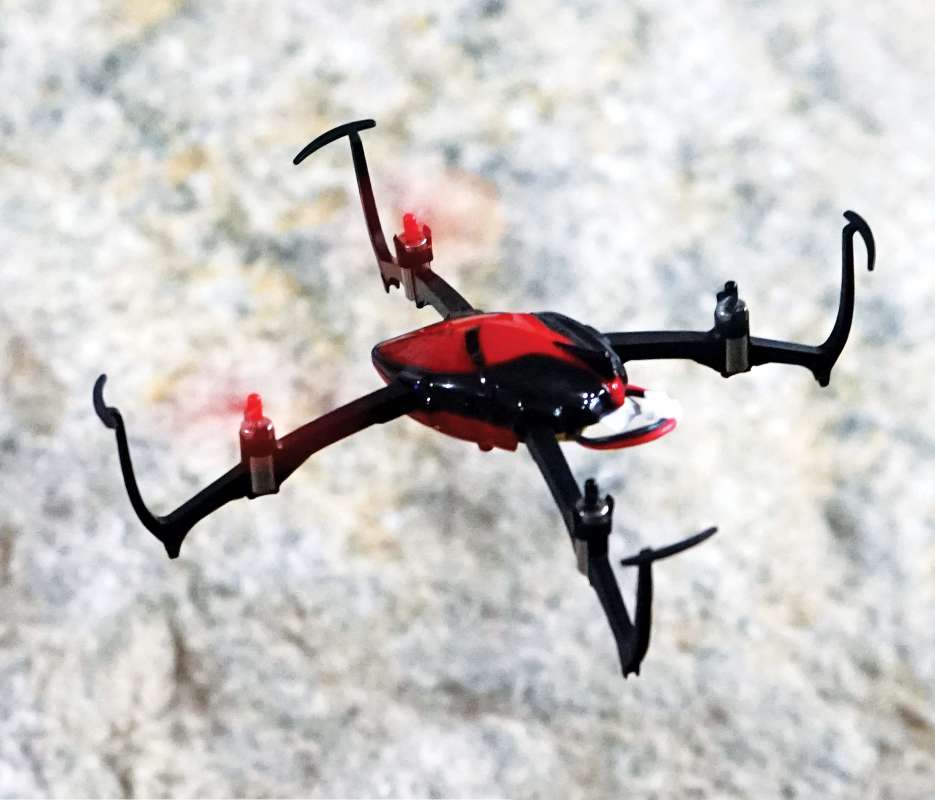 Dromida has hit the pavement this past year with a few new releases and the diminutive Verso quad copter is on the list of many a would-be buyer. It’s small in size, has killer looks and boasts some pretty cool features. Like the Ominous and Vista, you can get a Verso in one of four color schemes. Dromida also packages it all up with everything you need to get going, including a spare set of props. The Q205 transmitter is thoughtfully laid out and all the controls are easily within reach. There are three different rate modes, so whether you’re a novice or a skill master, the Verso will do exactly what you want it to. Switching between 20%, 60% and 100% is as easy as the push of a button.

• ?The highlight of the Verso is obviously the effortless inverted flight. When flipped front to back, the Verso automatically reverses the forward or backward movement, so the controls are the same.

• ?The lightweight airframe and sturdy prop guards make the Verso extremely durable. We managed to bounce ours off of more than a few obstacles with no damage.

• ?The Q205 transmitter is larger than any “toy-like” radio you’d normally find with an inexpensive micro machine, giving folks with larger mitts the area they need to fly comfortably.

• ?Like all of their previous quad offerings, Dromida serves up the Verso in four different color choices, red, blue, green and yellow, so you can fly with your friends and know who is who.

The world of RC hobbies is immersive and entertaining. Picking up the controller for the first time is something that will get the blood flowing and provide such immense enjoyment that many people, many of you readers become hooked. After hours upon hours of flight you look for every new avenue in the hobby. You explore and try to find something new and unique that will give you that feeling of the first flight again. The Dromida Verso offers a new challenge that even the newbie pilot can try out … being able to fly inverted.

When I first put the Verso into the air I was impressed with its smooth operation. It was very steady and was able to hold its center very well with minimal drift in any direction. Pitching the quad forward and backward was smooth, but a little slow. I started to fly it at a 20% rate to get it off the ground, but I’ll get to that later. The maneuverability was very satisfying and it’s something that would be very easy to pilot in your home and is just big enough to pilot outdoors as well. The controls were very forgiving and when you would let go of the right stick the quad would quickly level out and hover hands-off. Now that I was able to see that it was a stable craft it was time to bump up the power.

I was able to adjust the rate of this quad with the simple press of a button. Starting in the lower left corner at 20%, 60% and finally 100%. Each level would increase the overall speed and agility of the Verso. This is a great feature that allows a more experienced pilot to fly at 100% and show off to their friends and potential new pilots, then bring it down to 20% and help their new friend learn the basics all on one machine with just the press of a button. When I was flying in 100% rate it required a great deal of my focus. Fortunately for the Items in my living room, this quad’s small size and light weight kept the items on shelves safe from destruction. I would strongly recommend that you fly in a large space or outdoors when at 100%.

Of course, the absolute best part about the Verso is the inverted flight. Keeping a machine stable and pointed where you want it while upside down has always been a hefty task to master. Dromida has solved that problem with the innovative technology in the Verso. While flying in pretty tight quarters, I was able to flip in all four directions, without worry of losing any altitude. Once inverted, it’s as simple as flying around as if the quad was right side up, except you’re looking down at the battery, not the canopy. We found it especially fun to invert the Verso and then “land” it on the ceiling. Given its capabilities, there are tons of cool ways to enjoy this little machine. Through all of our testing, we encountered more than a few crashes, getting a little too bold with our thumbs in enclosed areas. Throughout all of our tortuous flights, the Verso never showed any signs of bending or breaking. If there’s one thing Dromida machines are known for aside from being tons of fun, it’s that they are extremely durable.

While being able to change your rates is pretty cool, a feature that will be sure to draw the attention of most flyers will be the ability to not only flip like many other quads out there, but also be able to fly inverted with ease! While in flight, simply tap the flip button on the upper right por- tion of the controller and you can flip in any direction and remain inverted. The Verso is equipped with technology that enables it to know the orientation of the drone and adjust the controls accordingly. Simply put, although you are upside down, your con- trols will be the same as when the quad is right side up. It is not as difficult to fly as CP helicopters because the machine does most of the work for you. If you hold the same button down for two seconds and release you will be able to do a complete 360-degree flip. The Verso creates enough power and lift that it will not lose much altitude if any at all. I was able to fly the Verso at high speeds and flip while on the go giving me an entertaining aggressive flight.

This quad is an incredible deal for the money. With a cost of around $40 this is sure to keep you entertained no matter what your experience level is. Flying upside down is a neat feature as well as the high speeds reached by the Verso. This is the perfect machine to fly inside the home on a stormy day or outside on a clear calm day. Get yourself a Verso and you’ll see why everyone is “Flipping” out about it!