As Reported by BY CATHY FREE @cathyjfree 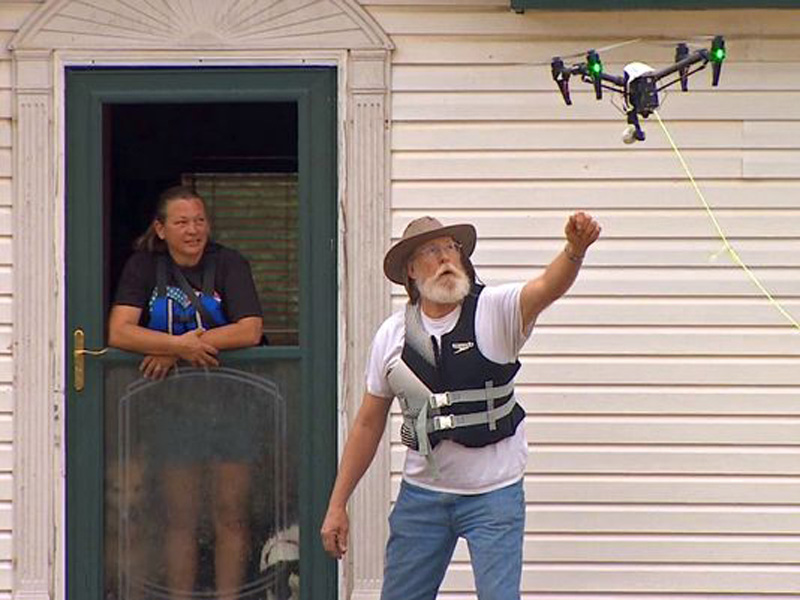 Bill Kastel and his wife, Tracey, were hoping to catch some extra Sunday morning shuteye when they were awakened early on May 25 by a loud clanking. Opening the front door of the mobile home they’d mounted on five-foot-high stilts near a creek in Venus, Texas, eight years ago, they were astonished to see a river raging below their front porch.

“It was just one foot away from flooding us out,” says Bill, 58, an auto mechanic who was flooded once before in 2007. “The clanking we heard was the pressure tank for our water well after it fell off. If we hadn’t heard it, we probably would have slept through the whole thing.”

Trapped on all sides by water with their cat and five dogs, the Kastels dialed 911 and waited for help. They didn’t expect that help to come in the form of a drone nicknamed “Valkyrie,” operated by software engineer and Joshua Fire Department volunteer Garrett Bryl.

Bryl, 43, a drone hobbyist for three years, offered his services to the rural fire department six months ago when he realized that his quadcopter could make a lifesaving difference when people needed to be found quickly.

“I’d used it before to assist with fires and find gas-line leaks,” Bryl tells PEOPLE, “but this was my first swift-water rescue.”

Using his drone, Bryl delivered life vests and a safety line to the Kastels, which Bill attached to a beam on his house. The other end was then hooked to the bumper of a fire truck and a rescue by raft was attempted.

“They got close, but in the end, it was too dangerous – they were worried about knocking over the stilts on our house and sending the entire place down river,” Kastel tells PEOPLE.

“It’s scary to think that we might have had to leap for our lives or have been washed away,” he says. “Knowing that we had life vests and a safety line made a huge difference. Watching that drone come in was the coolest thing I’d ever seen. That pilot was no rookie.”

An hour or so later, the Kastels were evacuated by a National Guard helicopter, returning once the water had receded to fetch their dogs and cat.

“We were lucky – the damage to our house could have been a lot worse,” says Bill. “I’m so grateful for everybody who showed up to help us, especially the drone pilot. Everybody thinks of drones as something the military uses for spying on people, but there are lots of other uses, too.”

That same morning, Bryl also used Valkyrie to help locate two people trapped in a pickup truck that was swept away by floodwaters near Joshua.

“With an aerial view, I was able to find them in 45 seconds and we got a helicopter in there to get them out before they were carried away by the water,” he says. “All in a day’s work, I guess.”