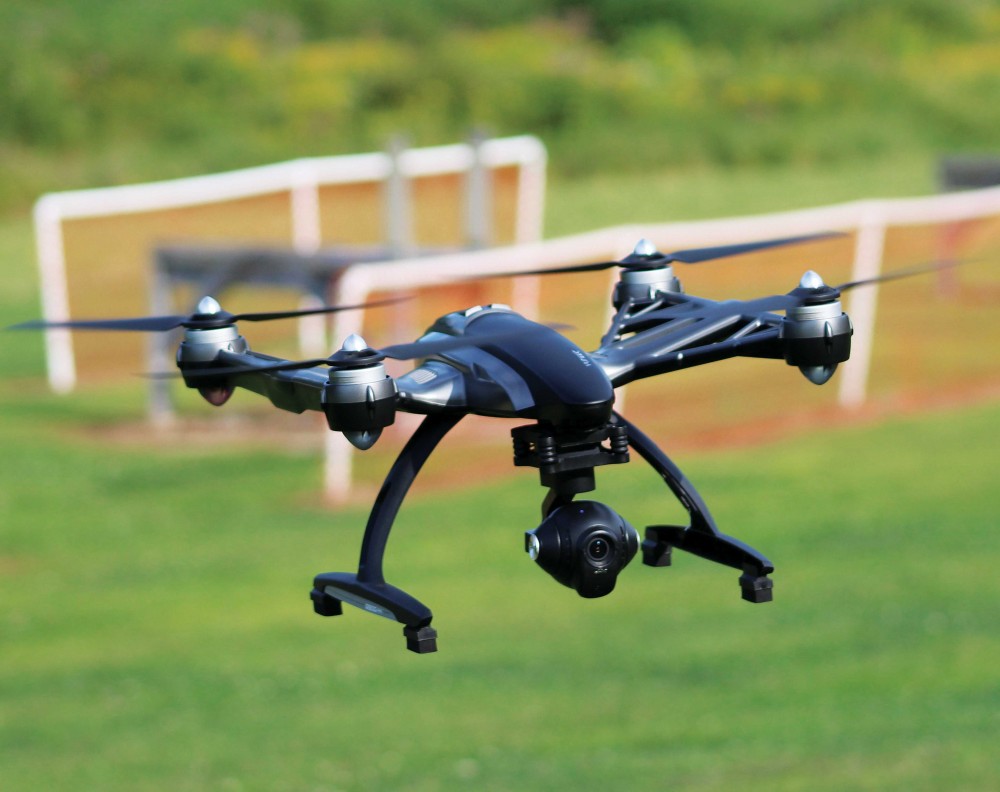 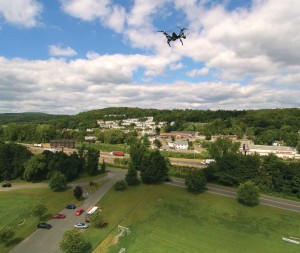 Building off of the success of the wildly popular Typhoon Q500 and Q500+, the designers went back to the drawing board to not only keep up with the industry standards, but to surpass them. The new Typhoon 4K uses many of the same features as the earlier models, but packs a much more capable camera and gimbal unit. With the ability to capture 4K video, you just might need to invest in a new PC for viewing and editing, but the quality of the footage you capture will be amazing.

Those already familiar with the ST10 family of transmitters will feel right at home with the ST10+. The large touch screen display on the Android powered radio gives you all the info you need at a glance and navigating through the various menus for camera and video settings is a breeze. The screen is hard to see in direct sunlight, but Yuneec provides a sun shade that mounts directly to the screen for easy viewing. The video and picture function buttons are located at the top of the case, while the flight mode switch is front mounted on the right side as a three-position toggle. The motor arm/ disarm button is cleverly place above the left stick on the face so you have to deliberately reach for it, negating the chance of an accidental spool up or power loss. The onboard CG03 camera/gimbal can be tilted up or down via a slider on the left side of the ST10+.

I’ve always been more of a fly fast and stay inverted type of pilot … even with my drones. This new machine from Yuneec, however, has changed my mind about aerial media rigs. The Typhoon 4K boasts a ton of incredible features that allow even the greenest of pilots a chance to grab some amazing footage from the air without so much as a training flight. The independent flight modes make it easy for newcomers to feel right at home without worrying about damaging their investment. Whether you’re looking to film the kid’s soccer match from a safe distance or apply for a 333 exemption and start your own business, this just might be your next machine.

The pre-programmed defaults in the flight controller of the Typhoon 4K are aimed directly at keeping novices from getting out of control, keeping the machine itself in one piece and keeping the pilot and those around him/her safe. Out of the box, the model will not go any higher than 400 feet. For capturing great aerial media, we cannot offer up a reason as to why one would want to fly any higher than that, but the maximum ceiling can be altered using the Typhoon GUI, available for download on Yuneec’s site. The quad also has a pre-set geo-fence that keeps it from straying more than 300 feet away from the pilot. This too can be altered in the GUI to reflect a max allowable distance of more than 8,000 feet! Of course, this is beyond VLOS distance and the regulations here in the U.S.A. as outlined by the FAA, but that varies from country to country.

The three different flight modes are a welcome feature and are pretty much Yuneec’s take on what is becoming an industry standard. In Smart Mode, the Typhoon’s movements are based on the right stick, no matter what the orientation or location. As long as you are in Smart Mode, pushing the right stick forward will always move the machine directly away from you regardless of which way the nose is pointed. While Follow Me or Watch Me are always active in Smart Mode, there is also always a 26-foot safety perimeter around the pilot that will not allow the Typhoon to get any closer no matter what commands are given. In Angle Mode (Think Attitude or Manual), the Typhoon behaves just like any other quad and operates in the exact same manner. The right side of the ST10+ has a slider that can speed up or slow down the cyclic response and flat line speed of the machine for superbly stable video.

Perhaps one of the coolest features with the Typhoon 4K super package is the Steadygrip hand held gimbal controller. You can mount the CG03 camera and gimbal directly to the Steadygrip and then use a smart phone to control the video and picture functions on the camera while manipulating the gimbal withthe hand held unit. Pretty neat, eh? I know I always had thoughts of mounting my first camera gimbal to a hand held unit for capturing solid footage on terra firma. Now those indoor events and family picnics can be recorded in perfect 4K with nice stable footage. 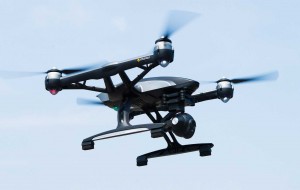 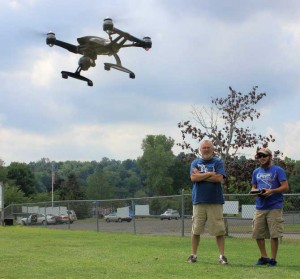 Being familiar with the Typhoon Q500+, we were excited to get this new 4K machine into the air and had few worries about our maiden flight. With a freshly charged pack in and the camera and remote system all synched up, we screwed down the four props to their corresponding motors. We had a steady green light in Smart Mode, so we knew we had good GPS lock and it was time for liftoff. Holding down the motor arm/disarm button for three seconds had the props spinning and ready to go. We advanced the throttle all the way and the Typhoon spooled up and assumed a solid hover two to three feet off the ground with no control input. A little more throttle bumped us up to 20 feet exactly (per the OSD readout on the ST10+ transmitter) and gave us a chance to glance at the touch screen readout. All the info you could ever want and more is displayed right in front of you. Altitude, distance covered, airspeed, GPS location, flight pack voltage and more are displayed right on the home screen around the perimeter of the main image. There is a little latency, which is to beexpected with a WiFi system, but it isn’t bad at all and the Typhoon isn’t really fast enough to get into trouble with. The image displayed on the ST10+ screen is crystal clear and it gives you a notification every time a picture is snapped or the video is recording. In Smart Mode, with the camera pointed at us, we tried to walk out to the side of the Typhoon for a photo op, but the machine just turned and kept the camera focused on us. Duh, we had it in Watch Me Mode. No matter where we went, the Typhoon always had the camera aimed at us. Sending the model to one side or the other using aileron control resulted in it flying a perfect circle around the ST10+ with the camera always pointed to the center. Very cool. To switch to Follow Me Mode, we simply had to press an icon on the top right of the screen. Now we could walk up and down the flight line with the Typhoon mimicking our movements. 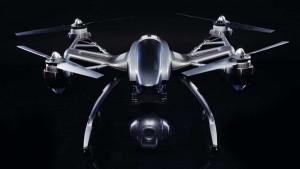 Gaining a little more altitude, we grabbed a bunch of nice video at 1080 and some at 4K. While the 4K was excellent, we only have one machine in our offices capable of displaying it, so the majority of our tests were conducted using 1080. The still shots and video captured using the CG03 were stunning. There is no fish-eye effect or bends in the horizon to speak of. Every so often, we noticed a little prop wash would wander into the picture, but only on video captured in heavy winds. The settings for the camera can be changed while in flight. Controls for white balance, shutter speed, resolution, ISO and light exposure can all be fine tuned using the smart phone app or the ST10+ transmitter, making for the ultimate aerial camera system in an RTF model. The gimbal always remained rock solid with no jello in the footage unless things got really squirrely with the wind. Flat line speed with the Typhoon is a little on the slow side, but that’s exactly what you’d want in a camera rig. An overpowered platform makes for not so stable footage. Besides that, the less the power is consumed by super speeds, the more flight time you have.

Using the Home Mode, the Typhoon will return and land within 26 feet of the ST10+ transmitter. The first few times we used it, we allowed the machine to come 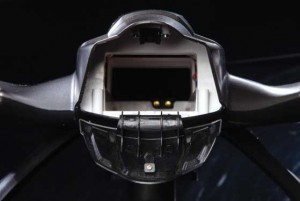 to rest entirely on its own, though some of the landings were a bit bumpy. Subsequent landings were performed in Angle Mode as they seemed a bit smoother. Yuneec even makes mention in the manual that it’s a good idea to learn how to fly in Angle Mode just in case GPS signal is lost. We also flew a few packs down to the critical level (right in front of us in an open field) and found that after the second low battery warning, the Typhoon will land itself wherever it is to keep from losing power and crashing. How much safer can you get?! 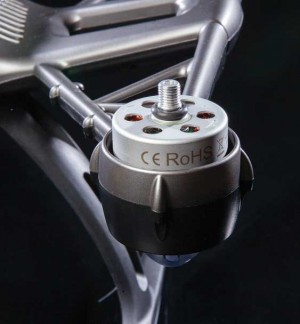 There really isn’t much to do in the way of assembly with the Typhoon 4K, but it is important to go over the myriad of accessories included with the machine. There are a number of cheat sheets and various other instructions which should all be read twice before powering anything up. Speaking of which … read over the battery charge procedures first and get them going as soon as possible as the included charger takes a while to do the job. After scrolling through the startup procedures a few times, I still had a few questions. Luckily, my next step was to pop the included Micro SD card into my PC to download the files alluded to in the manual. There are three different videos on the card and after watching them for a grand total of about 10 minutes, I was outside and flying. Yuneec takes all of the guesswork out of prepping the Typhoon for flight by including these videos. After they are downloaded to your PC, you can delete them so there is more space on the 16GB card for grabbing great stills or videos from the air. It is important to note that the compass calibration should be performed every time you go to a new locale to fly. The accelerometers can also be calibrated easily if the Typhoon is drifting while it should remain in a stable hover. 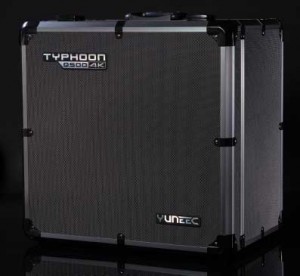 Yuneec includes everything with both RTF packages to get into the air. The version we received has the quadcopter itself with the camera and gimbal already installed, two flight batteries, the ST10+ controller, charger for the flight batteries, a charger for the ST10+ battery, the Steadygrip handheld controller, two full sets of props, neck strap, SD card, battery door lock set, alloy case with locks, plastic tweezers, prop removal tool, sun shield, USB program cord, quick start guide and a few cheat sheets. 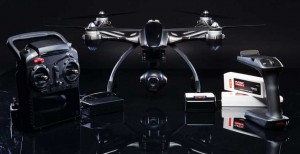 All in all, I’d have to say that Yuneec has set a new precedent for excellence in the RTF drone world. The Typhoon 4K is absolutely amazing for aerial photography and videography right out of the box. Can it compete with a heavy lift rig sporting a Red Epic or other such Hollywood level machine? Not exactly, but it comes darn close and it rings in at only a fraction of the price. While it’d be nice to have the means to charge the flight packs a little faster, they offer almost 25 minutes of flight time each, so it’s not so bad. Besides, the discharge tap looks eerily like another type of battery connector, so I’m sure we can rig something up to use an aftermarket charger on the packs. If you’re in the market for an all inclusive aerial media package, look no further than the Yuneec Typhoon 4K.