Home » New Release » The GUAV7, a Long Distance Drone Operable From a PC Through 4G Networks

The GUAV7, a Long Distance Drone Operable From a PC Through 4G Networks 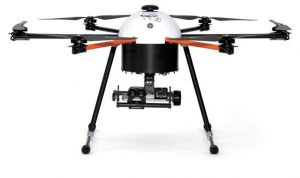 Globe UAV GmbH, a developer of unmanned aerial vehicles (UAVs), has announced the introduction of its GUAV7 drone, a long distance unmanned aircraft equipped with permanent HD video transmission for civilian use. The system has been developed in accordance with the needs of police and firefighters, as well as for monitoring roads, railways, power lines or solar power plants.

The operator controls the GUAV7 from a PC with a mouse or joystick. During the flight, the drone provides the pilot with real-time video with latency of only 100ms. The data is transferred via 4G mobile Internet, making the system controllable from almost anywhere in the world. 360° laser scanning and ultrasonic sensors are utilized for the identification of buildings and mobile obstacles, thus providing automatic crash avoidance.

At the CIDEX security fair in Beijing, Globe UAV recently demonstrated the GUAV7. The system was controlled by the pilot in Beijing, while the drone flew in Germany (within sight of an administrator who could take over for safety reasons at any time, as required by European law).

The ground station software incorporates a map for comfortable navigation by “click and fly”, with the live view also displayed. Flying can be performed by mouse or keyboard, or by predefined waypoints. In case of emergency, a standby GUAV7 Copter can be made airborne in less than 15 seconds. In urban areas this gives the copter the ability to quickly reach its destination to transfer data to responding forces for efficient organization of support.