This article was originally published in June/July 2016 issue.
by Ross Mealey 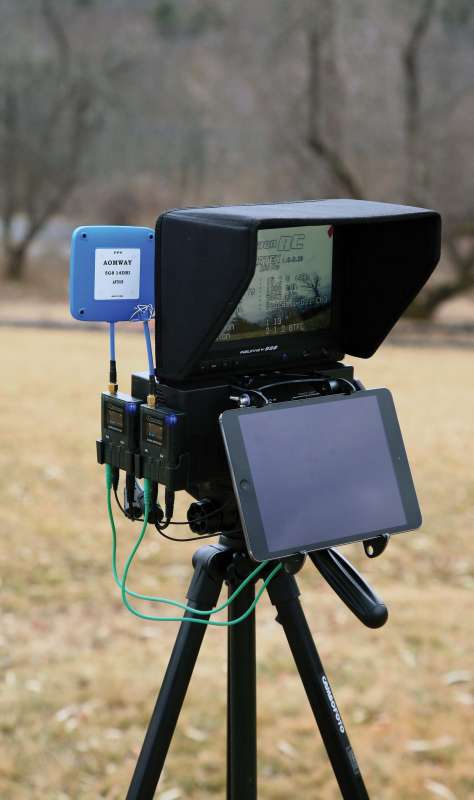 In a very short timespan FPV has gone from back yards and parking garages to national level events. What was once piecing together gear at almost an engineer level has given way to plenty of new faces in the game. With that, the gear also needed to start becoming more mainstream. This particular ground station system satisties both the new and very advanced pilots alike. While this rig isn’t sold as a full kit by HobbyKing, its parts are readily found by using the “ACC” tab at the bo om of the Quanum PSU sale page. The great part about that is you can accessorize this kit per your personal wants/needs. To build this system as listed above took less time, literally, than the unboxing. In my experience, an easily built ground station means more time flying and less time tinkering.

PSU
Enter the Quanum FPV Ground Station PSU kit. The kit includes everything needed to start building the heart (and soul) of a very nice, all-inclusive ground station. The pieces of the kit allow for (with the proper vRX) diversity and RSSI. It is 4S capable with four 12v outputs, a single 5v output and a USB to charge cell phones and other devices. It allows for the connection of three RCA connected output devices. It comes with the ability to con- nect a tripod via a female 1/4-20 mount on the underside, a monitor on the top via a male 1/2-20 and an included optional/removable tablet holder on the front side of the hard case. To top it all off the hard case has a built-in fan and a LiPo monitor/ programmable LV alarm.

The monitor provided for the review is the Field- view 888. The Fieldview, much like other 8” FPV monitors on the market, is a TFT 800×480 pixel (16:9) format that is LED backlit. The unit comes with a sun screen and 12v wall plug.

Receiving the video signals is done by a pair of Quanum Auto Scan 5.8ghz vRXs. These receivers cover all four of the standard 5.8GHz bands. They feature Auto Scan which will lock in on the band and channel with the clearest image. The OLED displays the current band, channel, actual fre- quency and battery voltage, as well as RSSI from the transmitter. The receivers work with 2S to 3S LiPo power.

One of the most important (and frequently over- looked) parts of a good video system are the antennas. As part of the kit, RHCP Aomway 4-leaf clovers and a 14dB gain Aomway CP Patch were used. These are of the “blue” variety (Right Hand Circular Polarized). If the pilot wants to use LHCP antennas you will want to buy everything in the “red” variety.

Like most people, I love receiving a box of goodies in the mail. I had actually expected a more “one-piece” design when this review was discussed, so this turned out to be a bit more fun than originally thought. The process of building was very low on the difficulty scale and many of the cables are either color- coded or have only one possible use, so first timers should have no problems. From “beans to bullets” this build was about 15 minutes in total. I found most of the things I encountered to be from satisfactory to great. There were also a few items that did not exactly fit as I would have liked to have seen (if I had designed this from scratch). I will try and break both ends down in the next couple of paragraphs.

Most of the build has excellent fit, finish and operation. I really liked that while not an inclusive kit, the parts (for the most part) fit  almost exactly as expected. I felt that by send- ing all the proper length cables, the build was completed with minimal fuss. It was good to see that the PSU allowed for 4S (up to a 5200mAh) and had a built in power meter with programmable alarm. I could see this size ba ery lasting most of a normal day of flying without needing a recharge. At the price point of this complete ground station you are getting 2x auto scanning video receivers and a built-in diversity that uses live RSSI to determine which feed will be sent to the monitor (or goggles/DVR, whichever you choose to use). The video receivers also have a RSSI percentage in their OLED display, so you will actively be able to re-aim the direction patch in a pinch if needed to get better reception. The overall size of the built ground station is fairly small, much smaller than some comparative systems with the same options.

There were only a few items I found that I personally believe aren’t exactly as they should be. The biggest issue in my opinion is the location of the two antennas. There really isn’t any physical separation between them and the monitor which may cause some possible distance issues. Another issue is that while the Auto-Scan video receivers are the suggested vRX, they are loose in their mounting cradles. This is actually a VERY easy fix by using a small piece of Velcro to take up the space behind it. Really the only other item I found is that the PSU’s size really only allows for up to a seven-inch monitor. The provided eight-inch unit fit, but the rear receiver’s antenna is firmly leaning against it. The ultra-close proximity of the clover and monitor may cause some noise/interference.

If you are in the market for a ground station I would give this kit some serious thought. It packs a list of options seen usually only on much more expensive systems and it does it at a much more wallet-friendly price point. Assembly and utilization are a breeze so you can be up and ge ing clear signals in no time while others are still se ing up their ground stations. With a few tweaks (vRX and Antenna location), the HobbyKing ground station could be much more reliable. Check one out for yourself, they are well worth the money.