This article was first published in issue #10 of Drones.

Within the last year, there have been a number of 3D capable quadcopters that have been brought to market. While they all might be fun to fl y, none of them combine the sleek, killer looks and awesome performance of the JR Ninja 400MR. This machine is actually JR’s fi rst ever fully RTF model and it comes with a sweet transmitter, the XG6. All you need is the ubiquitous 2200mAh 3S LiPo and four “AA” batteries for the radio. Not only that, but the radio system is XBus compatible so the wiring is nice and tidy under the hood. The Ninja also comes with camera mount to record your 3D adventures with a GoPro or give someone the ultimate FPV thrill ride.

MANUFACTURER: JR Propo
DISTRIBUTOR: JR Americas
TYPE: 3D Quadcopter
FOR: Intermediate to advanced pilot
PRICE: $699.99 RTF
NEEDED TO COMPLETE: Four “AA” batteries for the transmitter and a 3S 2200mAh LiPo are all you’ll need to get the RTF version into the air. 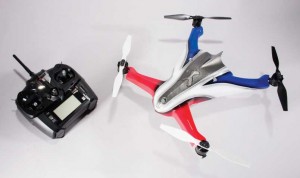 The Ninja 400MR RTF comes in a rather large box as it contains separate boxes for the quad and the radio in addition to an empty carton to fill the space. The XG6 comes packaged just as it would if you bought the radio separately from JR, complete with thoroughly informative manual that is easy to understand. The quad is secured within its own box, instructions, camera mount and spare set of Deans plugs.

With the recent explosion of multirotor platforms on the market in recent years, there are a small number of companies who are straying from the large, cumbersome aerial media rigs. Sure, a Canon DSLR mounted on a 650mm hexcopter is cool, but how fun is it to fly? That’s where the sport 3D models come into play. A great many of us drone pilots want something fun to fly, while not limiting the maneuverability of the airframe. Fixed wing pilots also want something fun, but not at the expense of limiting the stability of the model. The Ninja fits both of those bills perfectly and more.

Rather than messing with the complex nature of collective pitch systems, JR chose to go with the more common reversible prop/motor design. Of course, this requires a new breed of ESCs that are able to handle the rigors of an instantly reversing rotation. The new NJA-01 ESCs are just what the doctor ordered to keep things moving the direction you need them to. The business end(s) of the Ninja are the eight-inch 3D props that are the same top and bottom. Just like any other quad, there are two CW (clockwise) and two CCW (counter clockwise).

Setup on the RTF version is a non-issue as there really isn’t any to be done. From the factory, the XG6 is 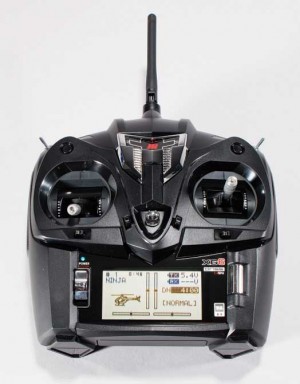 already pre-tuned to the NFC-01 flight controller and bound to the RG731BX receiver. Since this is an XBus system, there is only one lead going from the gyro to the receiver; nice and tidy without the usual mess of wires inherent to multirotors. Additionally, the XG6 is telemetry capable, so you could add the sensors of your choice to monitor whatever metrics you might want or need to. The XG6 is quite the marvel of technology itself. The transmitter might look like a no frills unit, but it packs all the same features you’d find on any high-end 6-channel radio and then some. I’m oft en fumbling about on my other radios while trying to locate the proper switch. Not an issue with this transmitter. Another nice touch is that the Failsafe is pre-programmed from the factory, though you should ensure it is working properly AFTER removing all four props.

The manual clearly states how to go about the initial pre-maiden checks such as motor rotation, hold, flight mode and failsafe. If a little more info is required, there are already a few very informative videos on YouTube … some of which are produced and published by the folks at JR. There is also a separate section to the instructions pertaining to radio programming and setup, should you choose to change any settings or start from scratch with a different JR radio.

The machine itself is a work of art and the full wrap canopy gives it a nice aggressive presence. The low slung landing skids (essentially just four Lexan protrusions in the bottom canopy) and sleek looks give this quad quite the imposing look whether in the air or sitting on the bench. The bottom canopy also covers the Power Distribution Board which is pre-wired and has female bullet connectors already soldered on for easy removal or installation of ESCs. A welcome sight is the mounting grommets for both canopies. Borrowed from CP heli canopy mounts, these grommets are mounted on each piece of Lexan and snap securely in place over each body post. JR includes body pins for each post, but the grommets fit so
nicely, that we opted to not even use them. I can’t imagine the canopy flying off … even in the event that we suffer a hard crash. Another nice touch is in the prop mounting design. Rather than securing each propeller with a single nut or prop adapter, the Ninja’s props mount using two screws and a spacer to securely fasten each one to the top of the motor can. This effectively rules out the possibility of a prop spinning off the shaft due to the stresses of the instant rotation reversal. 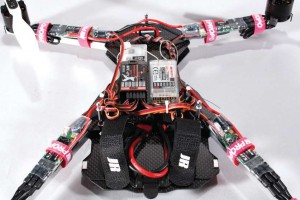 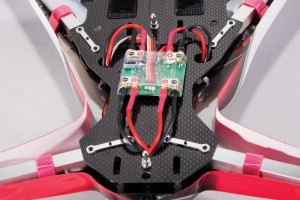 If you purchase the RTF version (as we received for review), there really isn’t any setup to be performed aside from the aforementioned pre-flight checks that are outlined in the manual. The instructions do offer a base-line setup for those wishing to use another JR XBus capable transmitter or for those who’d like to make adjustments without losing their stock info.

One of the Team JR videos on YouTube offers up a little more info pertaining to the maiden flight. In addition to the motor rotation verification and failsafe check, this video also instructs the user to give a final trim to get the Ninja hovering stationary without input and on a fully charged battery. Of course, one could also tweak the expo rates if so desired for each cyclic channel.

The Ninja, as a 3D quad, is a refreshing change from some other machines out there in that it has two independent flight modes. Flying in normal mode is just like any other quad and should be used for takeoff and landing, while mid stick is “zero pitch” in stunt mode. Flight modes are switched by engaging the left switch on the XG6. The right stick is for “HOLD”, which kills the motors no matter what flight mode or throttle level you are at, just like a CP heli. 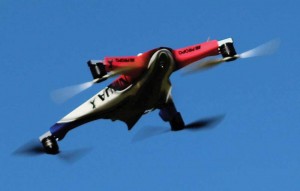 With a fresh Kinexsis pack dropped into the battery tray, we slid it into the airframe and pushed until we heard the click sound, meaning that the tray was locked in. Next was to turn on the transmitter and engage the Hold switch to avoid any unexpected spool ups. Once the Ninja is powered up, we waited for the audible tones from the ESCs, ensuring that we were good to go. Flipping the Hold switch off, we advanced the throttle ever so slightly to arm the motors. It is imperative that you only move the stick a few millimeters to achieve this and then let the motors run up before they slow down. Advance the throttle too far and the motors will stop. Also, if you don’t wait for the motors to run up, they either might not function properly or will be deactivated automatically by the gyro.

Once we were armed and ready to go, we buried the throttle and sent the red, white and silver quad towards the clouds. It was readily apparent that this machine was faster than most others on 3S power. With nary a breeze to be felt, our Ninja was perfectly trimmed right out of the box and didn’t need any adjustments so we brought it back down for a few forward flight circuits. In normal mode, the bank and roll angles are limited and the gyro keeps the Ninja steady, leveling itself when the sticks are returned to center. Just as with the vertical prowess, the straight line speed of the quad was quite impressive. I don’t see why the Ninja couldn’t pull double duty as a 400-class FPV racer in addition to being a 3D machine. Large hurricanes in upright orientations were easy and looked killer.

Once we had burned a full pack without inverting the Ninja, it was time for some fresh cells and a flip of the flight mode switch. We took the quad up to about 40 feet, advanced the throttle just above 50% and switched into 3D mode. The Ninja held steady, but the sound from the props was slightly different, not unlike when you switch a CP heli into idle-up. Without the added sensors used for normal flight mode, the model is much more responsive and requires a bit more discretion on the sticks than when flying a traditional quadcopter. Just like a CP heli, it will roll until you make a control input to stop it. Still up at altitude, we rolled the Ninja forward and into an inverted hover. Holding it inverted was a piece of cake and quite easy to maneuver slowly around in forward flight … a testament to the abilities of the NFC-01 gyro.

After we had gotten a little more comfortable with the Ninja, it was time for some FPV ride-alongs. We snagged the camera/transmitter unit from a smaller FPV quad we had on hand and strapped it to the camera mount on the Ninja with some double sided tape holding to the plate and some zip ties over the top. Once back up in the air, we sent the Ninja 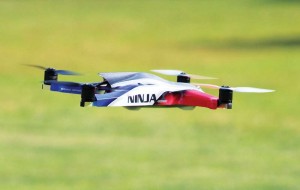 dancing across the sky as the crowd of on-lookers passed a couple sets of Fat Shark goggles around. First time users were advised to sit while wearing the goggles and this was sage advice as we almost had a few folks fall clean out of the chair! We did happen to bury the Ninja into the turf a few times (and some were pretty hard) while fl ying low altitude 3D, but never broke or bent anything other than a few props.

If capturing super stable HD video from a quad is your game, this isn’t your machine. If, however, you’re looking to have more than just a little fun while flying, the Ninja is definitely right up your alley. Strap an FPV system on for FPV racing, cruise around the field sharpening those skills in normal flight mode or crack the whip and bust some 3D moves in stunt mode. It’s all up to you. Its robust design is sure to stand up to some not-so-expected landings and the small size means you can take it with you everywhere you go to have it ready at a moment’s notice. Batteries for it are fairly inexpensive and easy to attain and the small size of the airframe means that a full size airfield is not a requirement. Best of all; the RTF version requires absolutely no setup or programming before you take to the skies and start slaying those 3D maneuvers Ninja style!