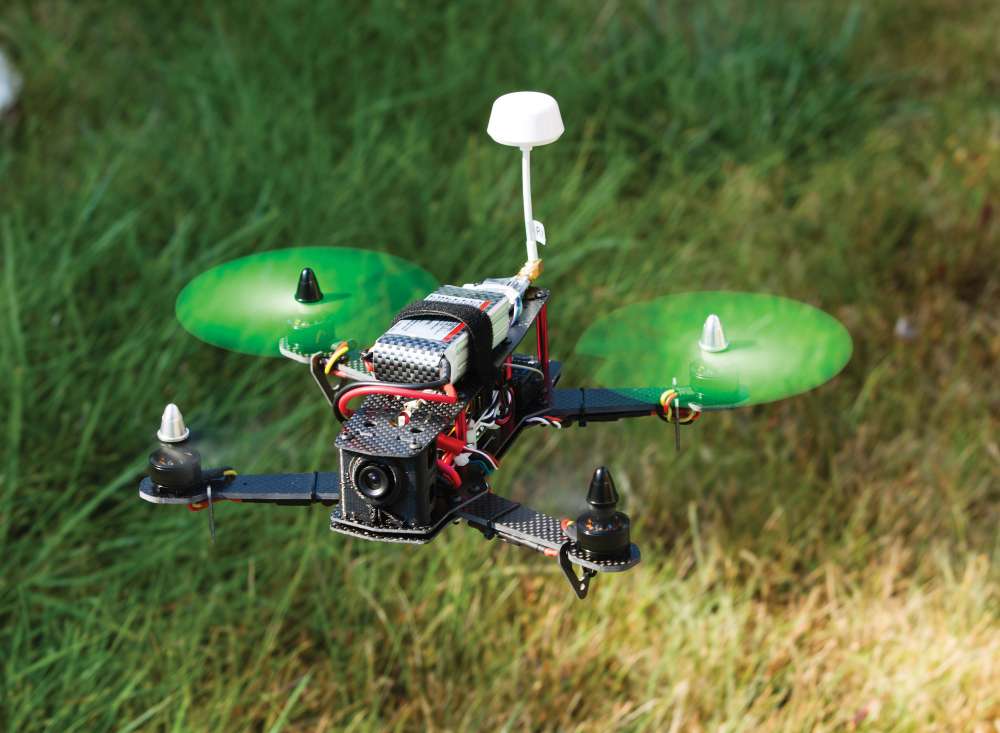 Though the drone industry is still relatively new, the two biggest genres to emerge in the hobby thus far have been aerial media rigs and race machines. Though the former might be cool when it comes to pictures and videos, not much in RC compares to the adrenaline rush of FPV racing. AeroSky and Xheli took notice and produced a sweet machine that is ready to fly (RTF) and competition ready right out of the box for less than $250! You still have to provide your own FPV gear, but in a world of open source programming and a mind boggling array of accessories available to outfit a machine, this quad is a refreshing change.

The ZMR 250 is one of the hottest race frames on the market today and it’s no wonder with all that is served up for not much money at all. The included transmitter doesn’t have all the bells and whistles of an aftermarket radio, but it does the job and is pre-tuned to the model from the factory. In a hobby where folks regularly spend two or three times as much on a race platform, we thought it’d only be prudent to stick to a budget on this project to see just how sweet of a machine would could get for the least amount of loot.

Sourcing an FPV system for our ZMR opened up a world of possibilities, but we had one setup on our mind from the get-go. The Quanum Complete FPV bundle from HobbyKing rings in at $99.99 and includes everything we’ll need to get our ZMR ready to race. Not bad at all for a complete, race ready machine for just a shade under $350 when you combine the quad with the FPV system. Let’s see how it stacks up against the competition.

Author’s Opinion
I’ve always been a go-fast type of guy. Whether it’s racing my 2WD buggies, tearing the sky up with my Extra 300S or ripping through some gates with an FPV quad, the adrenaline rush of the high speeds and competition cannot be beat. While I already have a few race quads, none of them offer all the goods that the new AeroSky ZMR 250 serves up at such an astonishingly low price. If you haven’t tested the waters of FPV racing yet, this is the machine you need to buy … NOW!

For just under $250, you get everything you see here, completely ready to fly right out of the box!

IN THE AIR
We headed up to RC Hobbies and More in Winsted, Connecticut as it is the only FPV race course in the area. It’s also a chapter of MultiGP so not only is it a proper race course, but the location is excellent for flying all sorts of aircraft. With a freshly charged pack, we popped the ZMR into the air and proceeded to fly a few small circuits close in at VLOS, just to get a feel for the controls. While the CC3D board was holding the ZMR dead steady in a hover, it felt a little sluggish on the cyclic response. For lazy folks like us, this is where a computer radio with EPAs and Expo would come in handy, but we could always fire up the OpenPilot GCS after the first few packs for some fine tuning on the gains.

Once we got a little more comfortable with the controls, we headed out to the race course to tackle some gates. Running a few test laps gave us a good feel for the layout so we opened it up a bit. The initial impressions of the controls feeling sluggish were quickly diminished once the throttle was pegged. While control inputs weren’t quite as crisp as we would have liked, they felt much better with the props screaming. Getting through the course without missing a gate was a bit more challenging, but easily achieved. The major issue we began to have at this point was that the tilt on the camera mount wasn’t steep enough to compensate for the angle of the ZMR while in fast forward flight. A simple print from one of the files should rectify this. The mount we installed had a 20 degree kick up angle. It would be better to have one at 30 degrees or so … for our flying style anyway.

After burning a few packs, the crowd began to grow at the race field. There were 8-10 pilots with various 250 class machines and a group of on-lookers. Without a timing system, we all agreed to have a heads up, double elimination race. Pushing the ZMR under race conditions had us straining to see the top of the gates, but we managed to make the semifinals against some pretty fast pilots. The fates were not in our favor though as we clipped a gate and broke a prop in our heat race, sending us down to the consolation race to battle for third place. AeroSky includes two full sets of props with each ZMR so we were back up and running in no time. We settled for a more cautious approach for the next race which resulted in a win with a time slightly faster than the second place finisher in the main event. Not bad at all for a machine that costs only a fraction of most of the other models out there on that day. More than a few pilots walked away with intentions of grabbing up a ZMR from Xheli. For the price, some of them might even buy two!

The Quanum FPV system performed flawlessly throughout our testing and made for quite a potent combo on the race course. I’m sure we got a few cock-eyed looks because of the size of the goggles, but hey … the ZMR 250 is fast no matter what you’re wearing. I’ll take a spot on the podium over looking cool any day. When all was said and done after our race testing, we had enough in our wallet after our ZMR package purchase to buy all the racers pizza and beverages!

The wide open layout of the ZMR 250 offers plenty of space to mount your onboard FPV gear, no matter what system you choose to use.

ASSEMBLY
As stated before, the ZMR 250 is completely RTF out of the box, so the only real assembly is concerning installing the FPV system. The triple-deck design of the quad offers plenty of room to mount up the transmitter and camera, but how to secure the camera had us scratching our heads. A quick jaunt over to thingiverse.com resulted in an assortment of ready-to-3D-print mounts for our Quanum camera. Within an hour or so, we had a nice case that slid on the frame posts to be sandwiched between the two main plates. A few carefully placed pieces of double sided tape secured our camera to the case and the transmitter to the frame. Voila. A race quad is born within mere minutes.

It is important to mention that the Quanum system is a 32-channel 5.8GHz unit so channel conflicts shouldn’t be a problem. Additionally, it transmits at 200mw so you’re assured of good reception on even the largest race courses. Likewise, the CC3D flight controller can be fine tuned using the OpenPilot programmer available on their website. For our test purposes, however, we left all the settings of the board as they were programmed from the factory. Upon initially opening the box, we thought it’d be best to move the ESCs from their factory location on the bottom of the arms, up to the top to allow the airflow from the props to keep them cool. However, we decided to leave everything as is from AeroSky as we only fly our race quads for three or four minutes at a time so we shouldn’t have to worry about temps. Also, the ESCs are much more protected on the bottom of the arms than on top in the event of a crash.

THE FINAL WORD
A ready to fly race quad for a meager 250 dollars? You bet, and it flies really well. I’m sure we’ll eventually put one of our higher end computer radios in this ZMR 250 for further tuning options, but for someone looking to get into FPV racing without breaking the bank, I can think of no better machine. It looks fantastic with the red alloy and all that carbon fiber, it flies predictably and is tunable and best of all, it’s a great competitor on the course in the hands of a good pilot. Be sure to grab a few sets of extra props when you make your order as they are the most commonly, if not the only, parts ever broken or bent. Lastly, grab a few extra batteries because you won’t want to leave the field once you strap those goggles on and start tearing it up with the QAV ZMR 250.