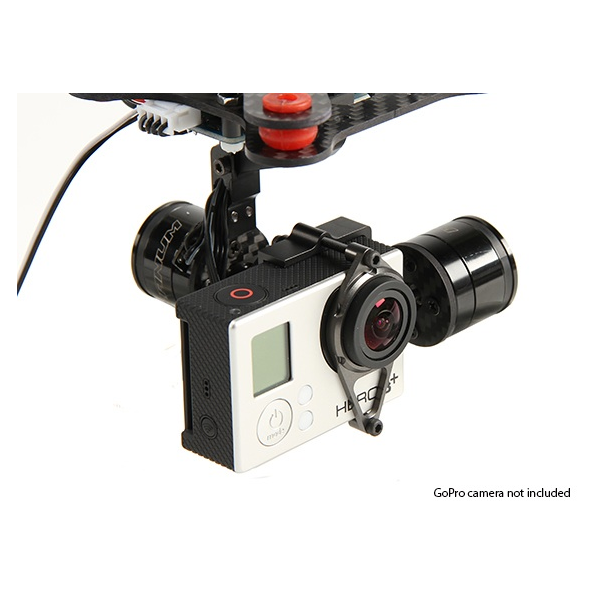 Within the last year or so, the idea of mounting a camera stabilization system to an RC aircraft or surface vehicles has become commonplace. The advancements made to the GoPro and many other action cams on the market allow for some spectacular footage from such a small unit. However, up to this point, the prospect of using a gimbal normally meant spending close to two hundred dollars or more before even including the expense of the camera itself. HobbyKing looks to bring gimbals to the multirotor masses with the release of their Quanum 2-axis brushless gimbal. Priced just under one hundred dollars, this unit is far more economical than all others out there.

Another facet of brushless gimbals that often stumps users is involved with the programming of the unit. Many gimbals out there require the download of multiple files, installing them onto your PC and then navigating through them with nary a manual for assistance. The Quanum gimbal is an exception to this rule in that it is pre-programmed at the factory, essentially making it a plug-and-play device once it is mounted onto your machine of choice.

The Quanum gimbal features a full alloy and carbon fiber construction design and uses compression style plate dampeners. This type of mounting provides two specific benefits. It offers superior dampening abilities as the grommets are pushed together rather than being pulled apart while it also offers better crash protection as the gimbal is secured to the aircraft frame and not at risk of breaking loose in the event of a crash. The overall result is a more stable image captured as well as piece of mind considering the price of a nice camera that might be mounted into the gimbal.

In order to mount the camera to the plate on the gimbal, Quanum offers the traditional alloy plate with long 2.5mm bolts to secure it, but they also provide an o-ring mounting method, hence the term “Quick Release” in the title of the product. This method involves botling to small carbon fiber posts to the back of the plate and wrapping two stiff o-rings around the front of the camera. The idea is that the camera can be quickly and easily removed from the mounting plate without the use of tools, allowing for easy access to the SD card and charge port. 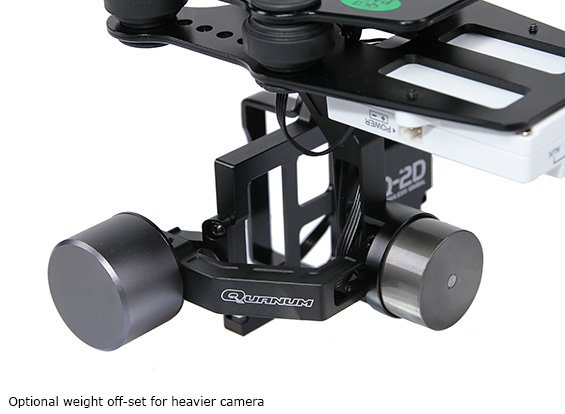 INSTALLATION
Mounting the Quanum gimbal requires a bit more tinkering as it does not included the widely accepted hook-and-rod type system. We mounted our unit by removing the standoffs on the top of the mounting bolts and relocating them to the four mounting holes on the front and rear edge of the lower plate. To do so, we had to reverse their position so that the bolt end of the spacers were facing downwards so that countersunk screws could be used to fasten them through the battery plate of our Gaui 540H hexcopter. We needed to use countersunk hardware so that they screws didn’t pose any sort of threat to the LiPo battery used to power the machine. Additionally, we opted for soldering a JST connector in parallel to the main battery lead on the machine so that the flight battery could be used to power the gimbal.

IN THE AIR
For our testing purposes, the Quanum gimbal was mounted to the belly of a Gaui 540H hexcopter that is powered by a Naza-M V2 flight controller. Using a 7 channel receiver and having the controller programmed to utilize the IOC, flight modes and remote gain access, we were left with no open channels to remotely operate the pitch of the gimbal. Controlling the gimbal’s attitude with the transmitter is nice, but upon the first power test after mounting to the machine, it initialized and centered properly, so we had no doubt that it would capture some great video.

The day we chose for our test flights was quite windy…the perfect test bed to see if the Quanum gimbal was up to snuff. After pressing the record button on our GoPro Hero3 Black, we sent the machine and its payload skyward. Once we had done a few gentle passes around the field in addition to a few slow pirouettes, we set the Naza to ATTI flight mode and began to rock the hexcopter to a fro and side to side. In the ten minutes of film that we obtained, we could find very few instances where the gimbal would not quickly compensate for rolling or pitching in quick succession. The only time we experienced even a delay in the function of the gimbal was following some powerful pitch ups to gain altitude in a hurry. The inertia that the camera and gimbal were subject to in this instance had the Quanum struggling to keep the camera centered on the pitch axis, but we really didn’t see this as a flaw since such aggressive piloting is not the norm when trying to capture smooth video or pictures.

THE LAST WORD
If you’re looking to get into aerial video or photography and are in the market for a brushless gimbal, but don’t have the loot to float a more popular unit, look no further than the Quanum gimbal from HobbyKing. The price is awesome, the appearance is great, there is absolutely no programming needed out of the box and the performance is good.