An Affordable Mid-Scale Quad
This article was originally published in The Drone Mag’s April/May 2016 issue. 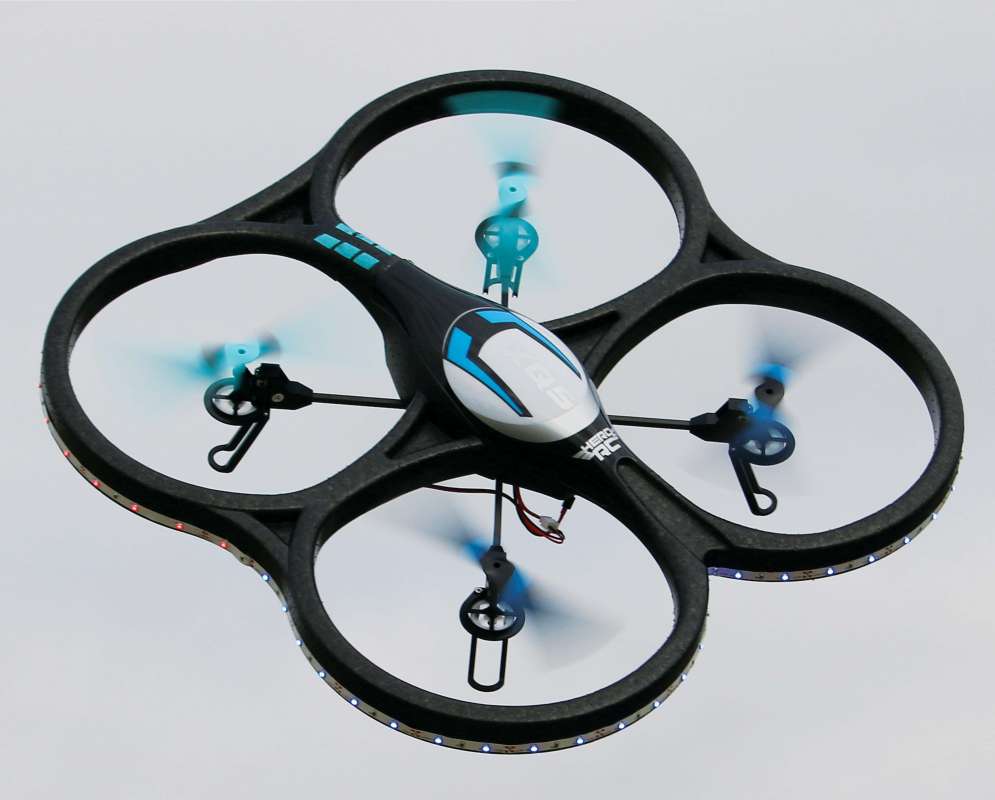 Xheli distributes all kinds of cool drones and helicopters, but the stuff from Hero RC is among the their top sellers and it’s no wonder why. Machines like the XQ-5 are super easy to manage, even for beginners, thanks to the Headless flight mode. Such a feature also helps to keep experienced pilots entertained while diving into the world of aerial media capture. With bright LEDs making after dark flights possible, the XQ-5 is a machine that fills a variety of rolls and does it all for only $115.

Now that I’m back in California, I’m lucky enough to have a giant park across the street from my house. There are a few trees and buildings, but nothing that is going to hinder my play time when the weather is nice … which is almost every day of the year.

Today’s play day was nice and sunny with just a light breeze. Before I put the XQ-5 up in the air, I wanted to take a moment to find out what all the buttons on the transmitter did. There seems to be a lot going on, but let me assure you it’s quite manageable. The transmitter has your typical speed and direction sticks as well as the trims in the middle of the unit. Other buttons include two on top of the transmitter and three on each side of the large, LCD display. The two up top are your ‘function’ buttons; they operate the camera (left button) and activate the barrel roll option (right button). The roll feature is quite simple; while up in the air (I would suggest high in the air the first time), simply press the top right button followed by the directional stick either up, down, left or right – the XQ-5 will roll in that direction. It’s quite cool, especially at night with all the lights lit up.

PROS ?
• Large size makes it easy to fly out doors
• Onboard camera takes great video
• Foam construction keeps it light, but still enough weight to make flights stable
• Bright LED lights surrounding the entire foam chassis
• Run times of about 8-9 minutes on the 850mAh LiPo
• Durable. Trust me, I tested this
• LCD display on the transmitter shows lots of information

• The foam airframe is light, yet durable, giving the XQ-5 the resilience that newer pilots require in a model.
• The on-board camera does an excellent job of capturing great images and video, all at the push of a button.
• Once you’re done recording clips on the camera, you can crank up the fun with flips and barrel roles.
• The for flight modes (rate percentages) allow the XQ-5 to grow with training pilots.

This is my first ‘mid’ scale quad, and by that I mean something that isn’t the size of a wallet. Its larger size makes it easy to see and it’s lightweight, foam construction easy to manage. I gave it a whirl in some medium wind and while it was a little bit of a handful, I was still able to muster up some cool flight time even with my limited experience. Light winds are best and also suggested if you’re a beginner. The video was actually quite good for a small camera and I was able to take and store quite a few solid videos on the 4GB card, however, I would suggest getting another card if you plan on sending the XQ-5 up quite a bit.

The LCD display is nice and large (54x41mm) and displays quite a bit of information on it. It identifies the mobility rate you are set at (40%, 60%, 80% or 100%), your trim levels, the throttle stick percentage and the transmitter battery level. When in flight, it also shows the props twirling around. I’m assuming this is real time – meaning if one prop became disabled it would show that on the screen. Thankfully I never had to test that out.

Once I had familiarized myself with the transmitter, it was time to send it up and see how it flies! Once you install the battery, the XQ-5 has two plugs underneath it you need to attach; one powers the craft while the other turns on the red and blue surround lights. After you have the battery plugged in (remember, transmitter first!), flip the XQ-5 over and give it a few seconds to initialize.

The first thing I noticed when lifting off is that it’s certainly not a speedy quad. It is, however, very stable and has mellow flight characteristics in 40% mode (again, the default mode). I flew around a bit to get used to how it reacts before hitting the 60% rate button. Jumping into that mode spiced things up a bit, but it still seemed a bit lethargic for my tastes. I decided to just go big and jump right to 100% rate — something I probably should have worked my way up to. At 100%, this thing is crazy responsive and even the slightest inputs had it jerking around wildly. It took a few seconds to re-train my fingers, but once I did, it was actually quite fun. I was, however, spending a lot more time trying to ‘catch’ it than fly it, so I bumped the rate down to 80% and found that to be a way better setting for me. Since I spent most of the battery flailing around in 100% mode, I used the remaining power to do some figure-8s and low fly-bys before it was time to recharge the pack.

Not wanting to wait a full hour for a recharge with the included charger, I hooked the LiPo up to my Hitec X2 AC Pro, providing a fully-charged pack in about 15 minutes. I installed the pack, turned everything on, set the rate to 80% and took off once again. For this flight, I tried working with the function buttons a bit, playing with the onboard camera and doing rolls. Pressing the top right button allows you to take video of your flight, while pressing the lower function button (the one next to the LCD screen) allows you to take still shots. The camera works flawlessly and takes some pretty awesome shots, however, I found that because it’s mounted close to the chassis, the top of the picture/video is blocked by the foam body. Thankfully, the camera can be tilted roughly 45° to allow a different picture/video perspective – something I would recommend doing right from the get-go. The XQ-5 also does some pretty impressive rolls; pressing the ‘roll’ button followed by moving the right stick in any direction will cause the XQ-5 to do a quick barrel roll. It can do front, back or side rolls, but unfortunately nothing on the diagonal axis. I got it down to where I could start doing a quick fly-by followed by a forward roll – it was pretty impressive and looked killer on the video! Flying the XQ-5 around in Headless Mode is a no brainer, even for beginners. Without having to worry about orientation, novice pilots are free to explore the aerial world and concentrate on grabbing those great shots with the onboard camera. As an added bonus, Xheli offers up a missile launcher, water cannon, hook and basket as well as a bubble blower that you can replace the camera with.

I was quite pleased with the performance of the XQ-5, especially in 100% mode. I could swing it sideways and almost loop it without having to use the roll button. My out-of-control style also had me testing the durability of it and I’m happy to say that, other than a few scratches on the blades and one or two minor foam chunks gone, the XQ-5 is still going strong. What I really loved about this quad was the LED lighting for after dark flights. It made me think of the movie Close Encounters of the Third Kind (boy, am I dating myself with that one). I highly suggest this quad to anyone interested in casual flying.