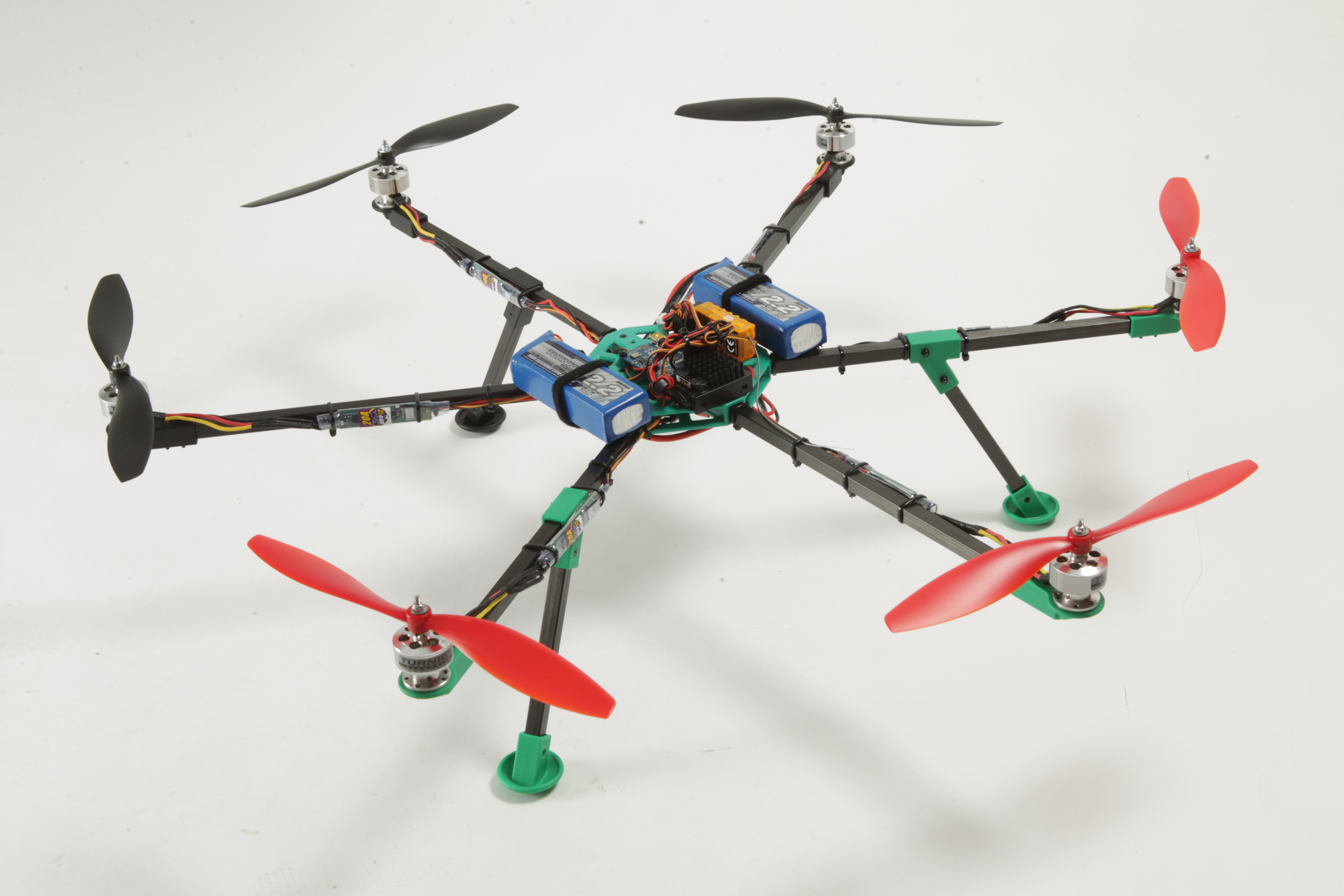 Hex and quadcopters are nothing new to HobbyKing as they already distribute and manufacture a vast number of frame kits, but to this point, none of them had been expressly designed with economy and ease of construction in mind. Enter the RotorBits lineup of machines. Offered in a tricopter, quad and hex form, these lightweight, modular machines are a breeze to assemble, outfit and get into the air for well under the cost of any others out there. The fiberglass construction allows for a low-cost, yet rigid and durable frame that is fit for a multitude of functions. The instructions are simply a one page diagram of how the frame goes together and while this might not seem like much in the way of a manual, the airframe goes together very quickly after all the booms have been drilled out.

Designed to be used with the Turnigy 1200kv motors, this hexcopter promises to be quite versatile and should be up to performing many different tasks, depending on how the board is programmed. Our test machine included a MultiWii 328P control board and while newcomers to these types of boards might become a bit confused throughout the programming portion of the build, we were already well versed in the ways of the MultiWii GUI (graphic user interface), so it was also a breeze to setup. Additionally, we received six of the company’s all new Slim 20 amp ESCs with the SimonK firmware which should fit nice and snug on the bottom or sides of the motor booms. Due to the huge diameter of this machine we did have to add a bit of wire to each ESC in order to comfortably mate with our custom soldered distribution harness.

SETUP
After drilling the booms and legs in the appropriate spots for assembly, the entire airframe went together in less than 10 minutes. There are three legs included for the landing gear which produces a tricycle style pattern so forward facing camera that might be mounted on the belly would require the purchase of an additional leg, foot pad and arm mount in order to provide an unobstructed view for the lens. Rather than use the zip ties to fasten the legs to the booms, we opted for sourcing some extra hardware from our local hobby shop which was no problem at all as the machine uses all 2.5mm screws and bolts. Per the setup of the tricycle gear, the machine must be built in flown in “I” formation if no other legs are purchased which was fine by us as there will not be a camera mounted for this review and the front facing arms are all the same color so ascertaining orientation during daylight flights shouldn’t be a problem.

AUTHOR’S OPINION
Simplicity is key when it comes to multirotor frames and HobbyKing got it right when they designed the RotorBits airframes. The modular design that is incorporated into the frames makes them easy to assemble, gives them an economical price point yet it provides an extremely rigid and robust platform for sport flying or aerial video and photo capturing. Not only that, but they are also extremely light in weight when compared to other kits of the same size. Speaking of size, this little beast isn’t so little, clocking in at 720mm from motor to motor, making quite a bit larger than the standard 550mm span for mid-sized hexcopters. The performance with the Turnigy 1200kv motors and 10 inch props is awesome and flight times with two 2200mAh LiPo batteries is well beyond the ten minute mark.

The motor mounts are pre-drilled specifically for the Aerodrive motors, but they use a common pattern so aftermarket motors should fit just fine. Once complete, the entire frame is actually quite large and pleasantly rigid…especially given its cost. From the top side, the build is quite clean as the Afro Slim ESCs mount nicely onto the sides of the booms. The top deck even has posts built into it to fasten the 328P control board into the center. There isn’t a huge amount of room for locating the receiver, but it was easy enough to do so right next to the flight controller. The one hurdle to overcome when placing all of the electronics is of the threefold variety. As mentioned earlier, the power leads for the ESCs are not long enough as they arrive from the factory to reach the center of the machine so we had to solder in some 3 inch extensions to each lead. Secondly the ESCs are all assembled without a power lead on the receiver plug so the use of a BEC is obligatory when employing the Afro Slim ESCs for our machine. Space was a commodity on the top deck of the center plate, but we had enough room for the flight controller, BEC and receiver with little to spare. Lastly, there is no included parallel harness to join all six of the ESCs to the battery so we had to fab on up. Not a problem as the soldering iron was already good and hot, but keeping things neat was a task as the sandwich style center frame does not have opening cut into the supports so we had to keep all the wiring on the bottom side. This was ultimately done with a great deal of patience and a few carefully placed zip ties to restrain the wires and keep a tidy appearance.

The final step in getting all the necessary components placed was to make some sort of battery mount to power our hex. After staring at the complex bundle of wires we had created to power all the ESCs for a good long while and drawing up several plans to fabricate a mount with some scrap materials, we opted for mounting the two LiPo batteries that HobbyKing so graciously included with our test machine on top of the booms on either side of the center plate. In order to do this, we soldered up a short parallel harness to plug into our distribution harness and used both sticky and strap varieties of hook and loop material. The idea of using two batteries might seem like a heavy prospect given the added weight, but the RotorBits frame is excessively light for its size and the motors are rated to carry a good deal beyond the weight of one battery. Not only that, but the fact that we now had two 2200mAh LiPo batteries wired in parallel meant we were looking at some nice long flight times with a total of 4400mAh of runtime.

After powering each ESC directly and bypassing the flight controller for calibration, we were ready to program the board for flight. As we said before, setting up a MultiWii based board can be fretful for a first timer, but once you’ve done it a time or two, it becomes second nature. First time buyers might also gasp at the fact that absolutely no instructions are included with the 328P board, but there are a vast number of tutorials online from both various distributors as well as from other MultiWii savvy users on a number of different forums. As we had already reviewed a few machines that use the MultiWii based boards, we had the RotorBits programmed in a flash and flight ready. The one aspect we did spend a little time on was calibrating the compass for the GPS. The calibration must be done while the board is mounted and plugged into the PC for the GUI, so it is imperative that you use a very long USB cord.

IN THE AIR
Once we had all of the wiring bundled accordingly, the dual battery packs mounted securely on booms to either side of the center frame and the board programmed, we were ready for our maiden flight. Arming the motors, we performed a quick check to ensure that all the props were spinning in the correct direction. Next, we slowly advanced the throttle to get the motors up to speed and the hexcopter lifted slowly off the ground. It might just be the narrow design of the frame and booms, but the big hex seemed a bit smaller in flight than its 700mm size. The large plastic props do make a great deal of noise however. So much so that it sounded as if some of them were out of balance, but they had each been checked and modified before mounting to ensure that they were properly balanced so we proceeded with the test flight.

Reaching a height of thirty feet or so, we took our hands off the sticks to see if the GPS was working properly. True to form, the giant hex locked into position with no input on the cyclic controls. Pretty handy for any machine that might be outfitted with a camera and gimbal rig. A few quick pirouettes revealed that the machine was dead steady in a hover. Fully comfortable with how everything was functioning, we began a few gentle circuits around the field. Like our other MultiWii based aircraft, the RotorBits hex was steady and predictable. It tracked smooth and gracefully through the sky as we ran circles and figure eights as few times around the property at fairly high altitude. With the gains set fairly low, it was slightly sluggish in its responsiveness, but this also aided its ability to stay in a nice flat orientation.

Bringing the hex back to earth for a bit of tweaking on our tablet, it landed softly on the grass in front of us and the motors shut down when prompted. A quick tune allowed us to increase the gain and travel of each channel. More power, more response and more gain showed a great improvement on the control sticks once back up in the air. The hex would pitch up with great authority showing us that a camera rig would pose no threat to its handling even with the dual batteries. While the gains were considerably higher, it showed no ill-effects of being twitchy or hard to control. The nose of the RotorBits would now dip noticeably when pushed into fast forward flight which not only looked awesome, but it also gave the machine a respectable top straight line speed. Not that speed is necessary for aerial videography or photography, but if you want to have some fun every once in a while, speed is a key factor. The transmitter let us know when we had reached the 12 minute mark so we slowly brought the hex back to us and again, landed gently. Powering it down and pulling the batteries for a voltage check revealed that they still had 11.80 volts each! Flight times of fifteen minutes plus should be no problem whatsoever…another advantage when considering we would eventually enlist this machine for video duties.

THE LAST WORD
So let’s say you’re in the market for a large machine that is fit for multi-purpose flights, but your budget isn’t quite up to snuff for some of the other airframes out there. The RotorBits might be just what you’re looking for. It’s got an extremely economical price point, is quite fast, offers long flight times and can be as gentle as you need it to be. Fortunately, we encountered no issues with any of the equipment, but we were sure that the RotorBits would stand up to a pretty good deal of abuse during low altitude crashes and/or hard landings. Its rigid frame is light, yet solid enough that it performs predictably in the air. In the event that you do break something, parts and electronics are equally as economical as the airframe itself. Got a hankering for some quality hexcopter flights, but don’t really have a “quality flight” budget? Get yourself a RotorBits Hex, Quad or Tri-copter…you won’t regret it.