See Why the Graupner Alpha 300 is Top Dog of 3D Quads! 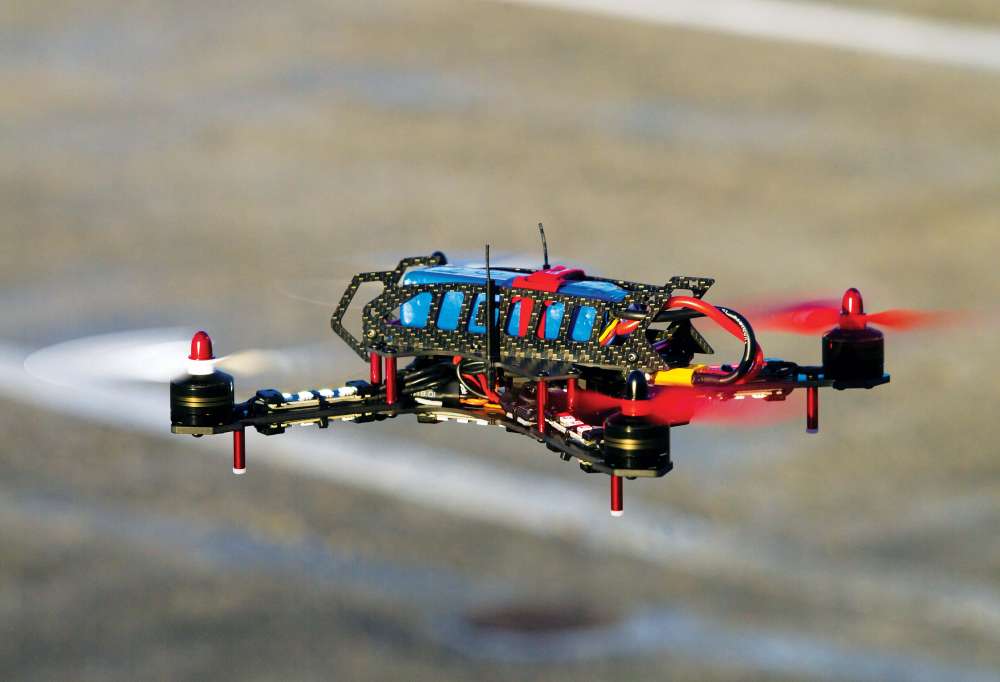 This article was originally published in June/July 2016 issue.
Photos By Edwin Rodriguez

While Graupner might not have been the first to the table with a 3D capable quadcopter, they sat patiently in their labs, carefully designing what might be the most advanced machine in the class to date. The Alpha 300 3D is a multi-faceted machine, but its “bread and butter” are the 3D qualities akin to the most hardcore CP heli models. This quad can perform all the mainstay 3D stunts and tricks that any heli can, but it does it all for less money than a large-scale pod-and-boom machine. Perhaps the best part about the Alpha is that it comes pre-built, complete with all the onboard electronics and even LEDs that are different from front to back to bust those 3D routines after dark without a search light!

CONS
• Manual isn’t all that great 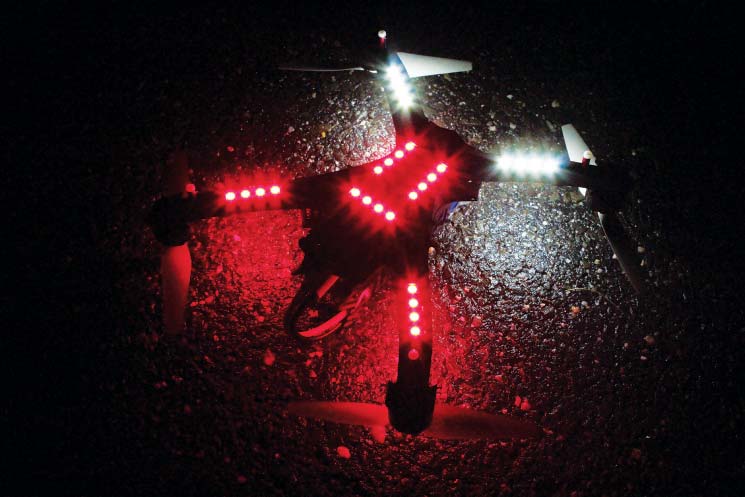 Drones (multirotors, not the FAA’s definition) are quickly becoming pervasive devices these days and not just among hobbyists. Their easy-to-fly nature, courtesy of waypoint programming and GPS navigation, is an awesome trait, but it leads to folks who don’t know the rules often breaking them and drawing unnecessary heat on those of us who fly properly. However, this is not one of those drones. The new breed of thrill machines in the quadcopter world (aside from FPV racing) are the 3D capable machines with reversing props for inverted hover and all sorts of maneuvers that only CP helis were previously capable of. These new models offer an invaluable training tool for transitioning heli pilots who are looking to cut their 3D teeth without breaking the bank. Stuff the Alpha into the sod while trying to perfect those low altitude tic-tocs? You’ll probably only break a prop … or two. Stuff a 450-700 size CP heli into the ground trying the same maneuver and you’ll be replacing a heck of a lot more than a prop or two. That’s the beauty of the 3D quads like the Alpha. They are tough as nails, can perform crazy flight routines and are loads easier to trans- port and wrench on.

We all know by now that the very thing that makes 3D quads so similar to CP helis is the ability to hover inverted via reversing props. This trait, however, is also the reason that many hardcore, purist heli pilots refuse to use 3D quads as a training or recreational tool.

The fact of the matter is, no matter how jazzed up the ESCs and motors are on your quad, the reverse rotation will still never be as crisp and instant as a collective setup. The secret to getting as close as possible to that instant change in direction? 4S power baby! The Alpha 300 3D is recommended for use with a 3S 2200mAh LiPo (or thereabouts), but it is also rated for 4S. This cranks the power output up substantially and offers those “smack-type” pilots the insane amounts of thrust they need to bend and twist the machine to their liking.

While the trend these days is to outfit “sport” type quads with canopies or colorful accents in ABS or other plastics, Graupner went with a minimalist approach for the aesthetics of the Alpha and it looks killer! The main frame plates, arms and battery tray rails are all beautiful carbon fiber accented with red anodized alloy spacer posts and landing legs. The arms are all 3mm thick with the rears being a tad longer for an aggressive appearance and better orientation cues in flight. The arms are also curved slightly; out a bit in the front and in on the back, further adding to the attractive nature of the Alpha. Lastly, Graupner added super bright LED strips on the top and bottom of each arm and in the center of the bottom plate. The fronts arms are white LEDs, while the rears and belly are red. The purpose of the belly lights is to be able to tell when the Alpha is inverted without having to use a four color combo on the lights.

Right from the factory, all of the electronics are pre-installed and cleverly hidden behind plastic fairings on the sides and nose. Fear not as these fairings are vented so the ESC’s can get that cooling flow during flight. For power in this stunt machine, Graupner went with their own design for the motors and ESC’s. The 2300Kv outrunners are a bit over-sized for the air- frame, but that’s what gives the Alpha ridiculous amounts of power. To compliment the big motors, each one is supported by a 20 amp ESC, rather than a smaller 12 or 18 amp unit. The heart of the Alpha 300 is the GR-18 receiver that has a built-in flight controller. The GR-18 can be used in drones, helicopters or even airplanes, but we’ll get more into that in a different issue … or publication. The GR-18 must be used with a Graupner HoTT transmitter, which some might not own and therefore will want to overlook the Alpha 300. HOWEVER, there is a little something you should know about the new MZ-12 “Multicopter” Radio. You can program the flight controller in the GR-18 directly from the radio, no PC required! Yep, you heard that right. From basic setup involving multirotor type, flight modes and ESC calibration to full-on PID tuning and adjustment, the MZ-12 does it all—on-the-fly adjustments without having to even power the machine down. Now that’s a killer feature that is sure to sell loads of MZ-12’s with the GR-18.

The Alpha 300 3D comes nicely packaged in a foam cut-out with an extra set of the six inch props. Everything is pre-installed and tuned from the factory. You simply have to remove the props, bind it to your Graupner HoTT Multicopter radio and program your Throttle Hold and Failsafe.

Setup is a breeze if you purchased an MZ-12 Multicopter Radio with your Alpha as there is already a model programmed for it. If not, the manual for the quad tells you exactly what to do to get the transmitter set up after binding the two together. Once you’ve verified that each motor is spinning in the correct fas-teneddirection and that your flight mode switch is functioning properly, you’re almost ready to go. Treating the Alpha as if it’s a CP helicopter, you should also program a Throttle Hold switch on the radio, make sure the failsafe is set properly and to always perform a range check before the first flight.

• Always perform calibration and tuning procedures with the props removed! It’s an easy affair as each prop is keyed into the shaft of the motor and fastened with self-tightening prop adapters.

• The manual recommends this, but it’s worth mentioning again. Be sure to program a “Throttle Hold” function as you would for a CP heli and always perform a range check before the maiden.

• The MZ-12 Multicopter Radio comes from the factory with model 1 already pre-programmed for the Alpha, but it doesn’t hurt to check the settings to make sure everything is as the manual states.

• Though the Alpha 300 is rated for 4S, we highly recommend that intermediate pilots start off with the ubiquitous 3S 2200mAh to get familiar with the machine. With a high capacity 4S pack, the quad can be a handful in untrained hands.

With a couple each of the 3S and 4S packs, we headed out to the Fly RC club field in Southbury, Connecticut. Usually in early February in these parts, the field is not an option as it is covered by feet of snow. Fortunately, temps were amazingly in the mid 50s so it was a jeans and T-shirt kind of flying day. Everything had been checked and double-checked as far as programming so we were good to go. Popping the 3S 2200 into the tray, we armed everything and got ready for the maiden lift- off. It’s worth noting that when you are flying in normal mode, once you arm the motors by slightly advancing the throttle, there is no difference between 1% and 50%. Once you get above mid stick, the motors accelerate for takeoff. This is something quite common with the 3D quads as they mimic the actions of a CP heli, but without all the flight mode mixing and pitch changes. Once the Alpha popped off the ground, it settled into a steady hover without any input on the sticks aside from throttle. A few quick  pirouettes for the camera and we started flying slow circuits around the field. In Attitude Mode, the Alpha felt like and oversized FPV racer with power to spare. The GR-18 keeps the roll angles from going too far in this mode, perfect for newer pilots who are just transitioning from a smaller machine. The one thing this mode does not limit, however, is the power. Vertical punchouts were great on 3S, so we couldn’t wait to get the 4S battery in there. Before getting to crazy though, we flipped into Rate Mode and brought the Alpha up a bit higher.

Rolling it through the nose was effortless, as was keeping it there, inverted. Bringing it back upright was just as easy so we proceeded to start rolling left to right and then back again. Tic-tocs and bouncing across the field Daffy Duck style was a breeze and should pose no problem for those with limited CP experience. No matter which way we inverted the Alpha, it was planted and even in the bright sunlight and it was easy to tell the orientation with the LED lights. Our timer went off at the 4 minute mark so we brought the machine back in for a power upgrade with the 4S pack.

Before even lifting off the ground, it was readily apparent that the Alpha was cranking harder on the 14.8 volt Turnigy LiPo. Rather than gently lifting off this time, we buried the throttle stick and watched with gaping jaws as the Alpha quickly became a spec in the sky. To say that this quad boogies on 4S would be an understatement. Back down on the deck, we put the Alpha through its 3D paces. The transition from upright to inverted was much quicker this time with the bigger battery whipping the motors from one direction to another far faster than the 3S pack. This type of quick response is exactly what heli pilots crave and that is precisely why the Alpha is perfect for CP training. We have flown a lot of 3D quads over the past year or two, but none of them behave quite as closely to a heli as the Alpha 300 3D. Hurricanes, rainbows, funnels, piro-flips. You name it, the Alpha can do it and do it well.

Tired of smashing your 700 sized flybarless beast into the dirt when trying to perfect that new low-altitude maneuver? Perhaps you’re just looking for a quad that’s not only fun to fly for sport, but can also double as a bigger FPV race rig? Perhaps you just want the coolest 3D quadcopter on the market that features advanced design and engineering … that also looks plain awesome? Whatever your cup of tea, the Graupner Alpha 300 3D is a sick machine that cranks up the thrill factor immensely, and that’s before you even pop in the 4S pack to turn it into an insane ride. The airframe is durable, the electronics components are second to none and the  LEDs allow for after dark 3D flight. Combine the Alpha with the new MZ-12 Multicopter Radio and you’ve got a potent combo that is easy to setup and use, giving you more time for flying and less for programming. I can honestly say that this quad is now the “Alpha Dog” in my sport model collection. 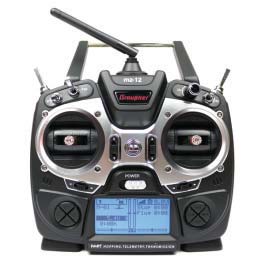