This article was originally published in June/July 2016 issue.
By Mark Ronge 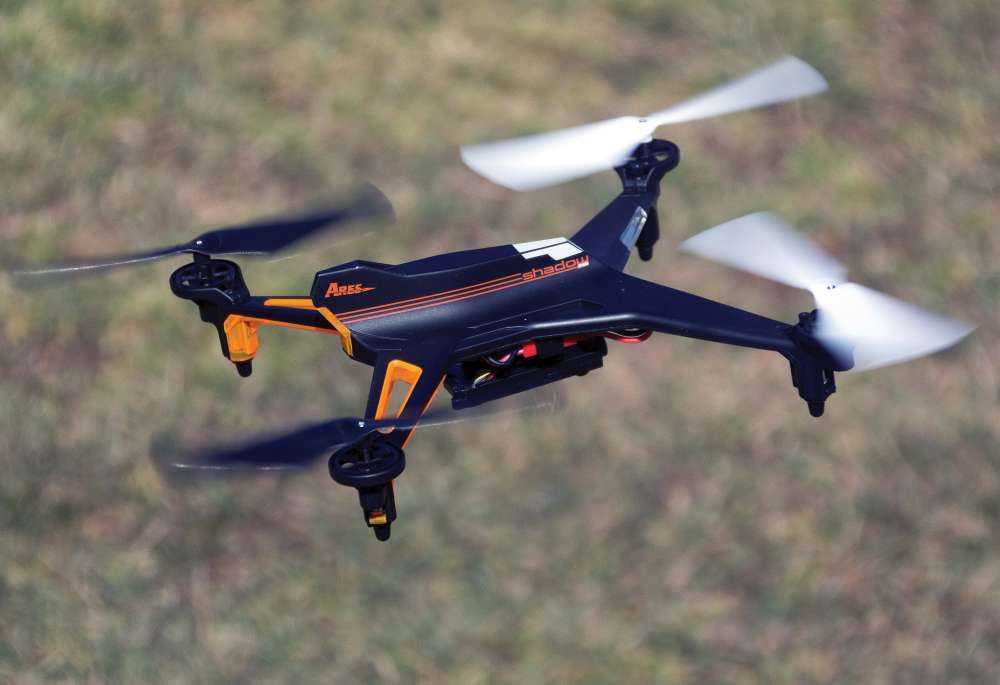 Let’s face it, there are hundreds of different drones on the market and it can be especially confusing when shopping for one. It doesn’t help when you try searching through them online. All of them look great, but wouldn’t it be nice to see one in person and check it out before you buy it? Almost everyone has been to a local HobbyTown shop and where better to check out their newest Ares RC quadcopter, the Shadow 240? Since HobbyTown is one of the largest hobby chains, parts availability and expert advice is usually just a short drive away, one of the perks of buying a model from a local source.

KEY FEATURES
• The included transmitter uses Hitec technology and has an easy-to-read LCD screen so you can quickly tell whether dual rates are on or off and trim levels.
• The Shadow 240 is able to perform flips and rolls with just a click of a button. Perfect for showing off to your friends!
• There are plenty of killer accessories offered for the Shadow 240. My favorite is the digital camera which can be controlled by the included transmitter to take either pictures or video (and also contains a 2GB micro SD card for storage).
• Plenty of bright colored LEDs help with orientation of the aircraft and are bright enough to light up a dark room for some night flying action. The design of this model is very sleek and aesthetically pleasing.
• The Shadow 240 is extremely durable and can withstand the rigors of a new pilot or those taking the plunge in FPV for the first time. 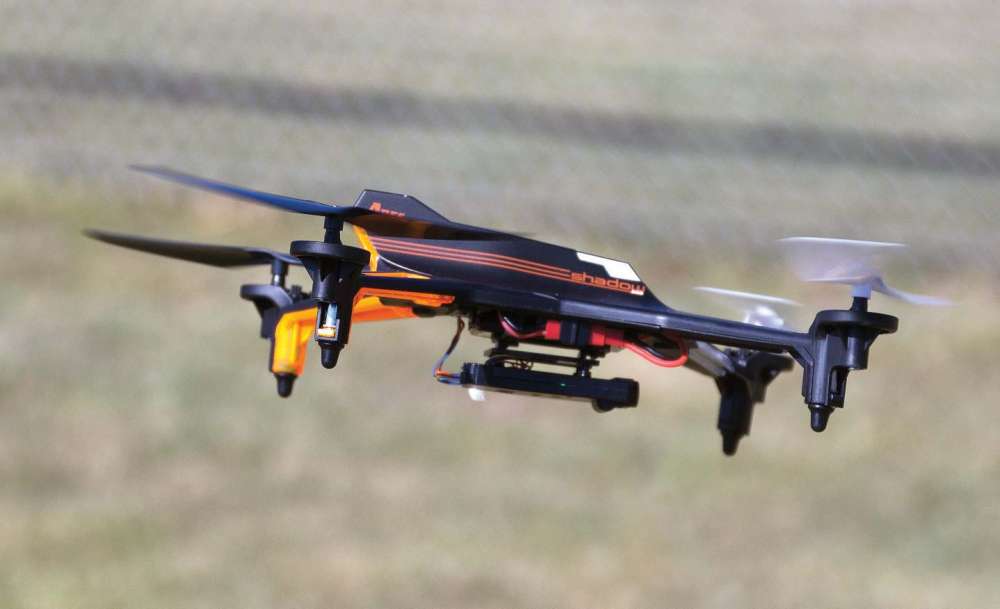 AUTHORS OPINION
After taking the Shadow 240 through the gauntlet, I can say that the drone is excellent indoors and out, which should be perfect for pretty much everyone. Because the manual is a bit lacking, I would recommend that if the Shadow will be your first drone, enlist the help of an experienced pilot so the experience is smoother and more enjoyable. With accessories such as a WiFi camera, the Shadow serves as a great first step into FPV flight. It’s impressive how affordable this hobby has become and at just under 120 bucks, I find the Shadow 240 to be quite the bargain and it can leave some extra money in your pocket (for more drones of course!). 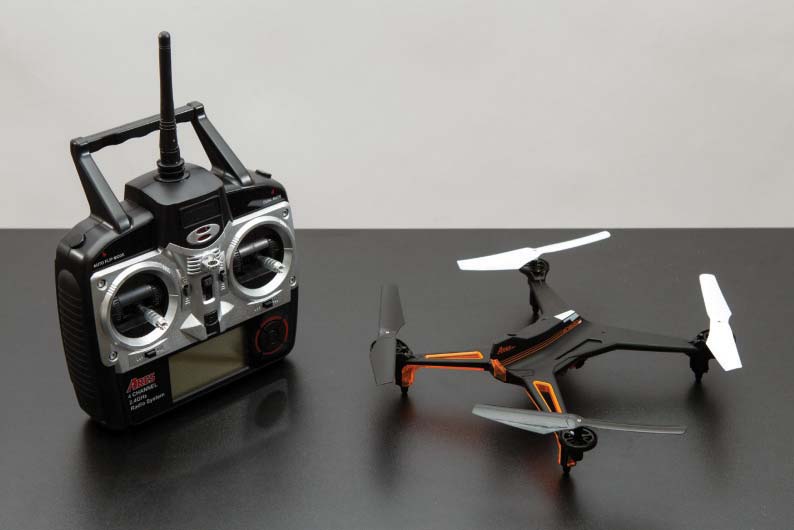 Being a 240 sized drone, the Shadow 240 strikes the perfect balance of indoor and outdoor use, making it quite the versatile machine. It can handle light winds (make sure the winds are below 10 mph), it features bright colored LED lights to help with orientation with an awesome, sleek design that looks great from all angles. This drone is completely RTF with a transmitter, 780mAh LiPo and charger included. The included wall charger handles recharging the single cell LiPo, but be aware it is a tad slow and can take up to 90 minutes to charge a fully depleted pack. Extra propellers are included in the package, but even after a few crashes I could not see any signs of damage on my first set, so they are extremely durable. The transmitter is basic, but does the job nicely. It features dual rates, so you can tone down the controls if needed. They are displayed on an-easy-to read LCD screen. It also has an auto-flip mode which allows for impressive stunts just by pressing a button.

One of the strong points of the Shadow is that it is compatible with many accessories that Ares RC already sells today. We were sent the two types of cameras that can easily be fixed to the drone for testing. The first is a WiFi enabled FPV camera that includes mounting gear so you can attach your smart phone to the Shadow’s transmitter. This enables you to quickly look at the FPV and back to the drone. Since the Shadow is a great size for flying indoors, it is fun to navigate a house and go from room to room and practice FPV flight from the comfort of your couch. Not to mention that it is a great way to practice aerial photography skills and is a great learning tool. The view from the WiFi camera is fed directly to your phone or tablet in real time and allows for picture taking and video recording, but this requires you to use your phone while flying (more on that later). As an avid photographer myself I was equally excited to test the other camera option, a more typical digital camera setup that Ares sells. This plugs right into the control board which provides power and allows for video and picture taking directly from the transmitter.

As a more typical digital camera, this camera utilizes micro SD for storage to get you started. This provides plenty of video which will last multiple battery packs, so for me there is no reason to upgrade to a larger size. The downside to this camera is that you do not get a live feed so you are guessing when to trigger the shutter or record video. Interestingly, I much prefer this camera to the WiFi version as I found the quality of the recorded videos and images to be much better than the FPV camera which suits my needs much better. A few of the other accessories available for purchase include a plastic “rocket launcher”, water gun and moveable winch, all of which are controlled by the transmitter.

ASSEMBLY
The Shadow 240 is an RTF, so the only assembly required will be if you decide to add any of the optional accessories from Ares RC that are available for the model. A set of extended landing gear is included in the package which is great for beginners to protect the underside of the drone. It is an especially good idea if the user decides to add any of the camera gear for extra protection.

Both the WiFi and digital cameras that where provided for the review simply clip on the bottom of the battery tray and plug into the control board of the Shadow. The standard digital camera is then controlled via the transmitter, one button takes pictures and the other one starts and stops recording video. It was a breeze to get working and the included micro SD card even comes with a USB adapter to retrieve your files. The FPV WiFi camera took a bit of extra work to get going. Installation was just as easy as the digital camera, however, there is an extra step which involves attaching your smart phone to the transmitter. I had to take the case off of my Android phone in order to get it to fit, but my phone is larger than most. On both iOS and Android platforms there is an app that the instructions point you to download and run. After connecting to the WiFi signal of the camera I immediately saw the live feed on my phone which was super cool. I did have some difficulty in saving video. I tried it on multiple Androids and found that sometimes the saved video file was not compatible and the software was a bit finicky. On my iPad I had no problem saving the video, but the quality suffered a bit due to the file compression that the app employs.

Two of the optional accessories for the Shadow, the WiFi and Digital cameras that can be mounted to the belly

IN THE AIR
I first tried the Shadow 240 in my living room with no camera gear so I could get an idea of the best possible performance without any extra added weight. For my first flight I left the dual rates on 50% so essentially the control throws were cut in half because I did not think I would need maximum travel indoors. The Shadow 240 took off without issue and I did not need to add much trim at all to keep the drone in one place. I did notice that it was not as stable as the larger, more expensive birds, so slight constant inputs are necessary to combat the wind generated by the model when close to the ground. Since there is no expo programmed into the control inputs, I did not find much a of a difference between the dual rate settings, just that I was able to do more extreme maneuvers and go faster when I used the 100% control setting. I will give the Shadow a plus in that it is extremely responsive and nimble, there was no delay at all from my inputs to the drone. The Shadow performed well outdoors, but it can be a handful in anything other than light winds so definitely follow the manufacturer’s recommendation of operating the Shadow in less than 10 mph winds. 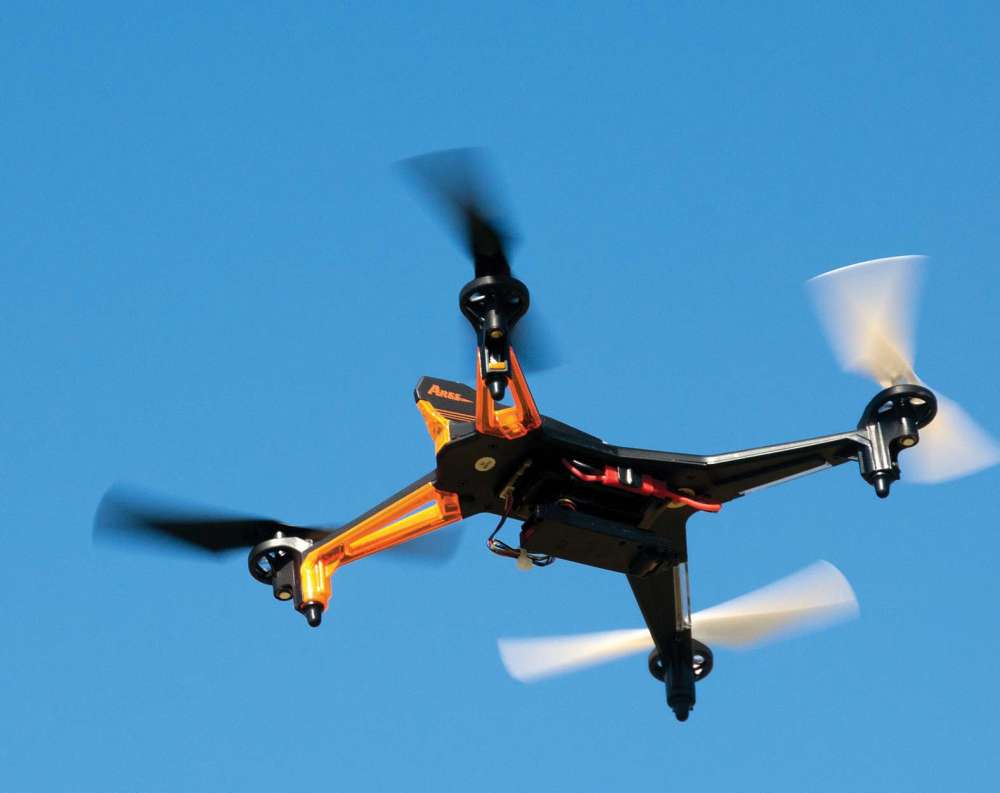 One of the most fun things to do with the Shadow is to use the auto flip mode. This is a blast as all you have to do is touch the flip button on the transmitter and once you hear the beeps, use the right stick and push it full in any direction and the Shadow will flip or roll on its own. I do wish there was an option to turn off the beeps, however, as they are pretty loud, but at least they do a good job of alerting the user that they are still in flip mode. Even though the manual says you must be at least 18 inches from the ceiling I would easily allow for twice that amount as it seems to gain a bit of altitude when performing these stunts, but will also lose a bit afterwards, especially if you have something attached to the belly. After a few knocks against the wall and ceiling, I got the hang of how much room I should allow in each direction and I was performing fl ips and rolls consecutively and had tons of fun. It should be noted when I added any of the camera gear, the Shadow seemed to drop rapidly after a flip and I needed almost the whole height of a room compared to when I had nothing on the drone.

While I was testing out the speed of the Shadow using 100% full control inputs I had the unpleasant event of hitting a few lamps and walls in the living room. Some of the hits were pretty rough, especially when I was trying out the flip mode feature and I assumed something would have broken. I was completely wrong and after a handful hits, the Shadow still looked brand new with only some slight scuffs in the propellers which did not impact performance in any way. Flight times where consistently 9-10 minutes on a full charge and I bet you can squeeze out another minute or so because I was doing tons of flips and speeding around. 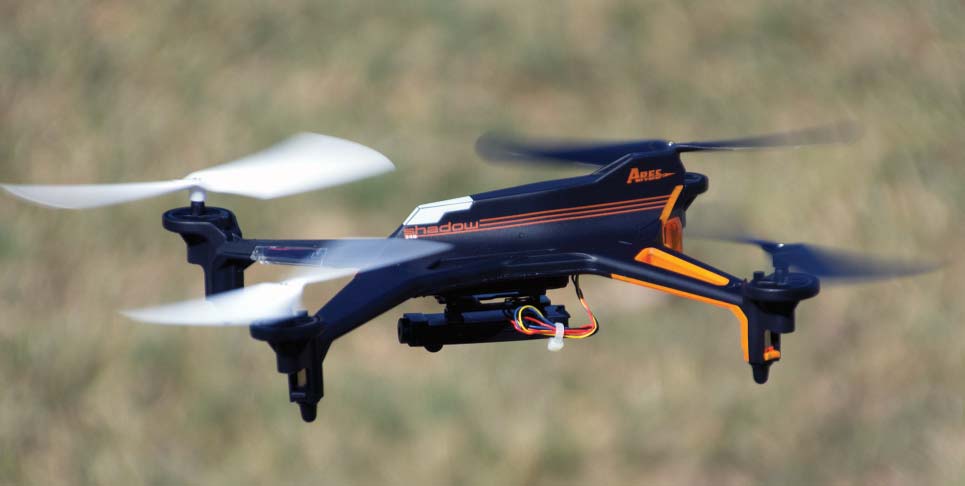 THE FINAL WORD
The Shadow 240 performed just as I expected with some cool features that set it apart from the rest. I am going to have plenty of fun recording videos and FPV racing throughout the house with the Ares accessories that bolt right on. I particularly enjoyed the quick response of the Shadow and the fact that it could be flown outdoors in light winds after I got bored inside. I find this to be a great drone for anyone who is looking to get started or a perfect bridge for those trying out FPV flight for the first time. Not to mention this thing can seriously take a beating without any signs of damage! 