The latest in a series of 250mm FPV racing frames from Diatone, the HobbyKing Ghost Edition LED Night Flyer is available in four different colors (red, orange, green and blue). This translucent colored frame kit includes a small  PDB (power distribution board) and four printed circuit boards (PCB), used to illuminate the four motor arms both top and bottom. These frames are great for FPV racing. A two servo pan/tilt camera can be mounted to the front, with space for a video transmitter to the rear. The flight controller bay is sized to accept a 50mm by 50mm flight controller, with mounting holes also provided for the smaller 36mm by 36mm series of flight controllers. No instructions whatsoever are included in the box. Nor could we locate any online. Though the more initiated may not have any problems assembling this little racer, we thought we would throw together a quick guide for those who may be left scratching their heads a little. Pay particular attention to any of the the words that we highlighted in BOLD. They cover areas where you may make the same foolish, time wasting mistakes that we made while building this frame. 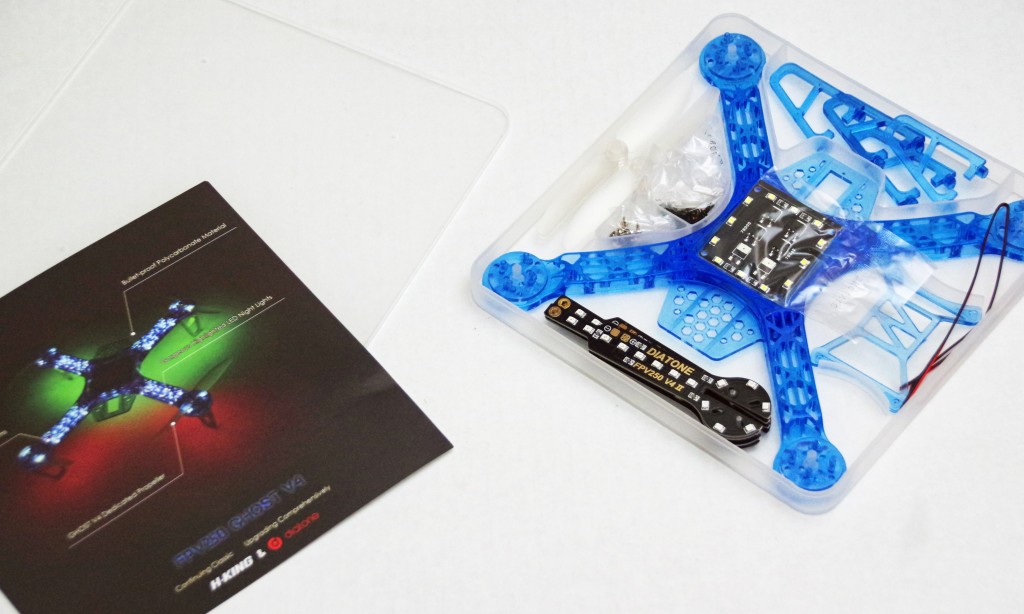 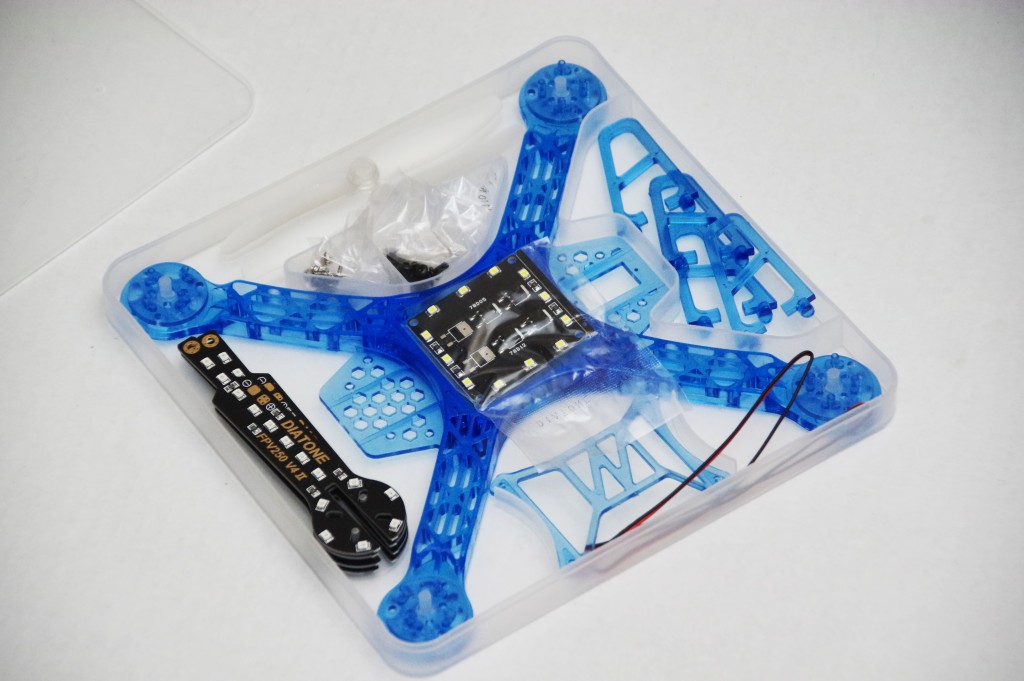 We opted to go with the MultiStar 2206-2150Kv Baby Beast motors. We used these motors on an earlier Diatone FPV250 frame and loved the performance they offered! HobbyKing Afro ESCs feature SimonK firmware and we grabbed four of the 12 amp Ultra Lites for this build. The HobbyKing KK has always been one of our favorite flight controllers, in part due to its affordability and easy configuration and tuning via the onboard LCD and pushbuttons. With the goodies gathered, we dove into the build! 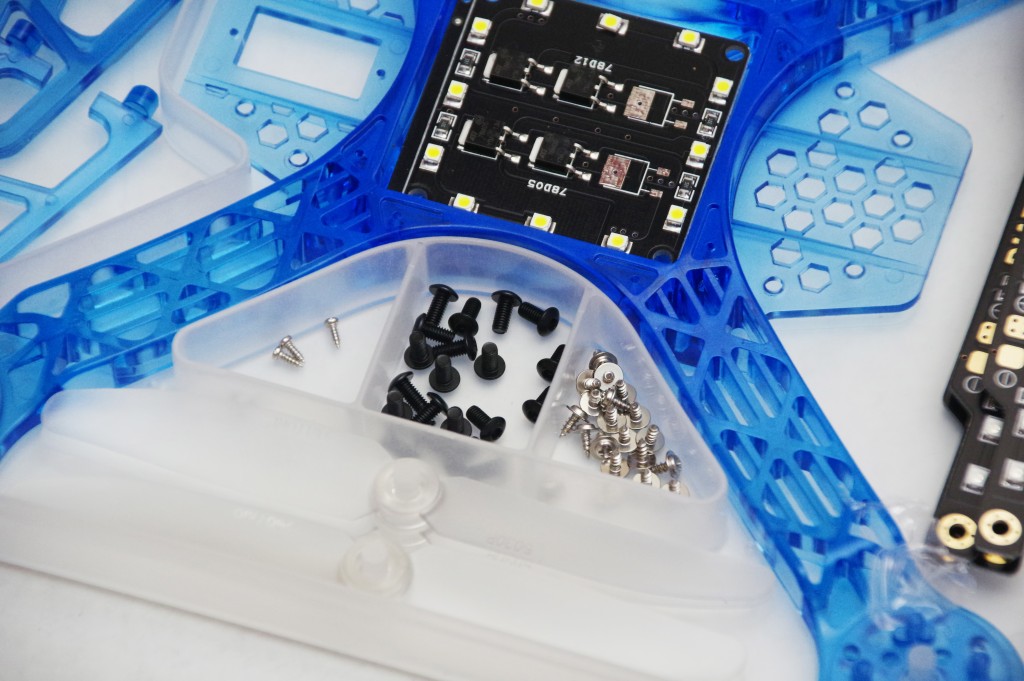 The included assembly hardware is segregated into three different compartments in the photo above. The wee screws to the left are used to anchor the flight controller protective cage in place. The 3mm socket head cap screws in the middle can be used to mount the motors to the motor mounting discs. We also used them to secure the in-board ends of the motor arm LED PCBs and to mount the KK flight controller. CAUTION: it is best to use nylon I.E. non-conductive fasteners when mounting electronics. We had none on hand for this build and thus carefully used a few of the included 3mm SHCs. The fasteners to the right are used to attach the motor mount discs to the arms. Do NOT over-tighten these diminutive fasteners. They will easily strip if you use too much muscle when torquing them down. 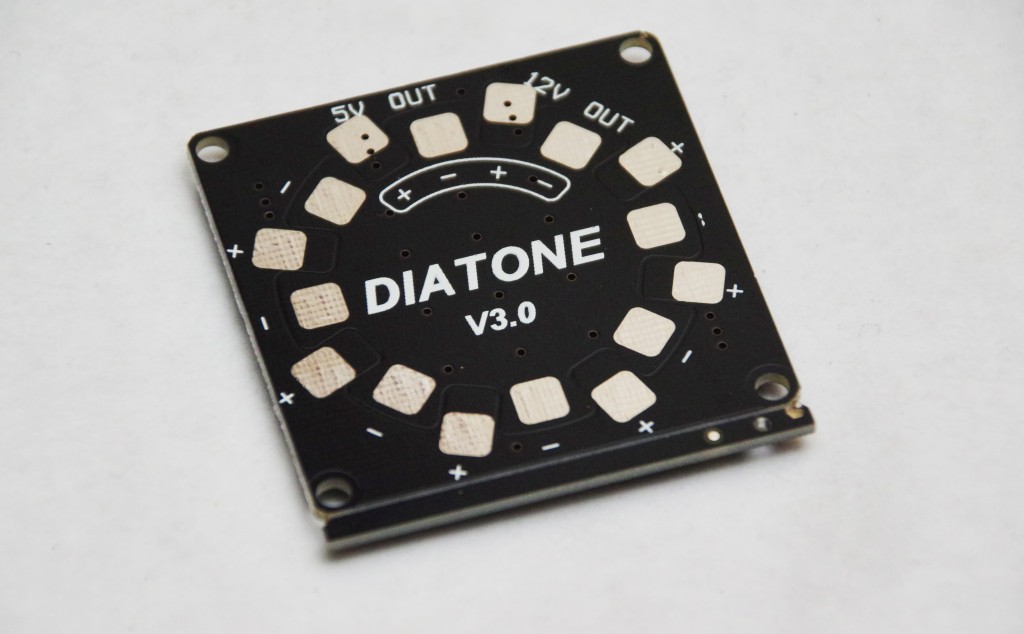 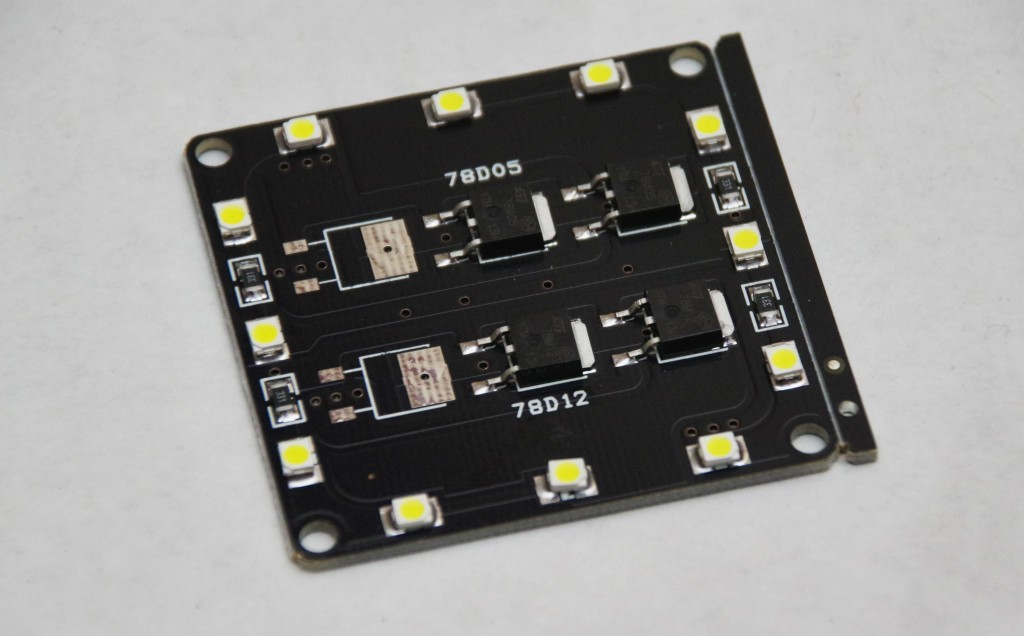 The included PDB is a slick little device that helps keep the wiring and layout neat. The bottom side of the board contains two each 7805 (5VDC) and 7812 (12VDC) TO-220 style ICs, as well as nine perimeter placed LEDs. The top side of the board contains a circular matrix of positive and negative pads, as well as one pair each of +5VDC and +12VDC regulated power connections. The +5VDC pads can be used to supply power to a flight controller and receiver if you are using OPTO style ESCs. The circle of positive and negative pads will be used to power the four motor arm LED boards and as a place to connect the power side of the four ESCs. The flight battery will also get connected to these pads. 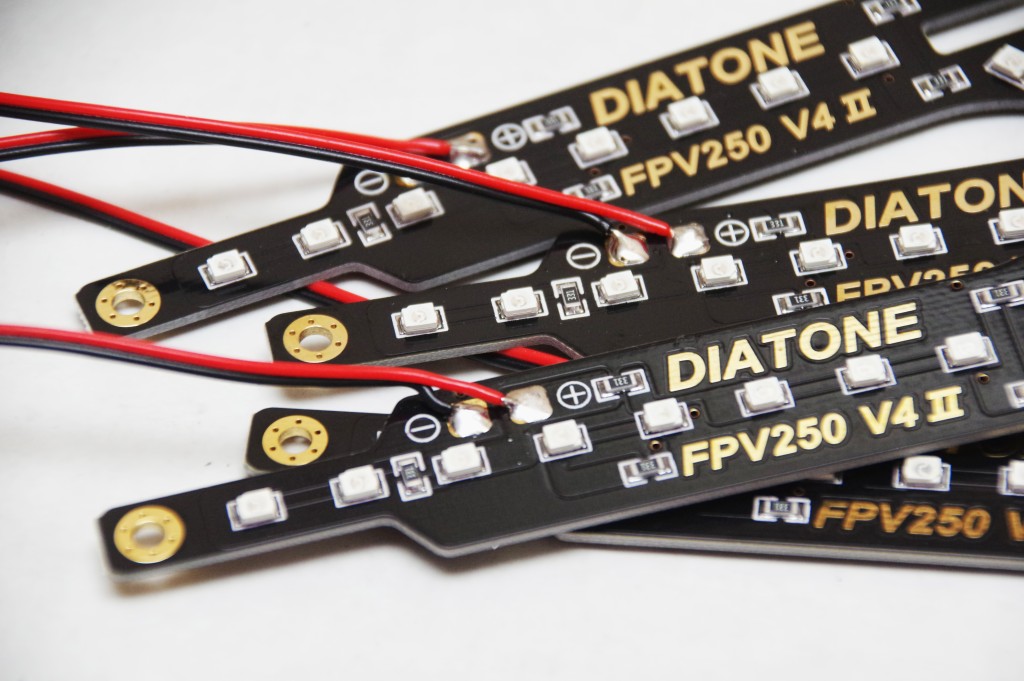 Diatone includes a short length of red/black twin conductor cable for attaching the motor arm LED boards to the PDB. We chose to run these cables through the narrow slots cut into the center of the frame on the four sides of the flight controller bay and used for running hook and loop retention straps. This is probably a great time to go ahead and install the battery strap, BEFORE the PDB gets installed into the center section of the frame. 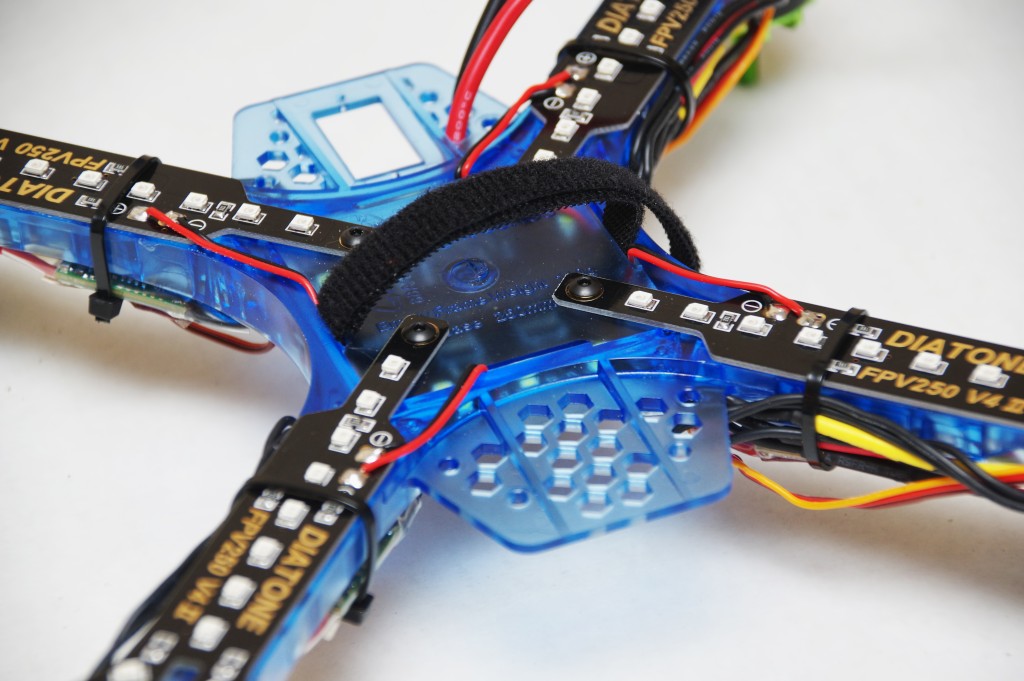 The four motor arm LED PCBs are covered with arrays of LEDs on both top and bottom. The top side LEDs are colored to match whatever color of frame you went with (green, red, blue or orange). The bottom sides are covered with either red or green LEDs. The four arms are thus NOT identical. You may want to power the arms up at this juncture, to identify the red and green pairs and then place them in whatever position you favor. We are stoked to say that we got lucky when assembling ours; without pre-powering them up at all, we managed to place the two green LED equipped arms on the front arms! The in-board ends of these LED PDBs can be held in place using one the included 3mm SHC screws. The out-board ends get sandwiched between the motor arms and motor mounting discs. 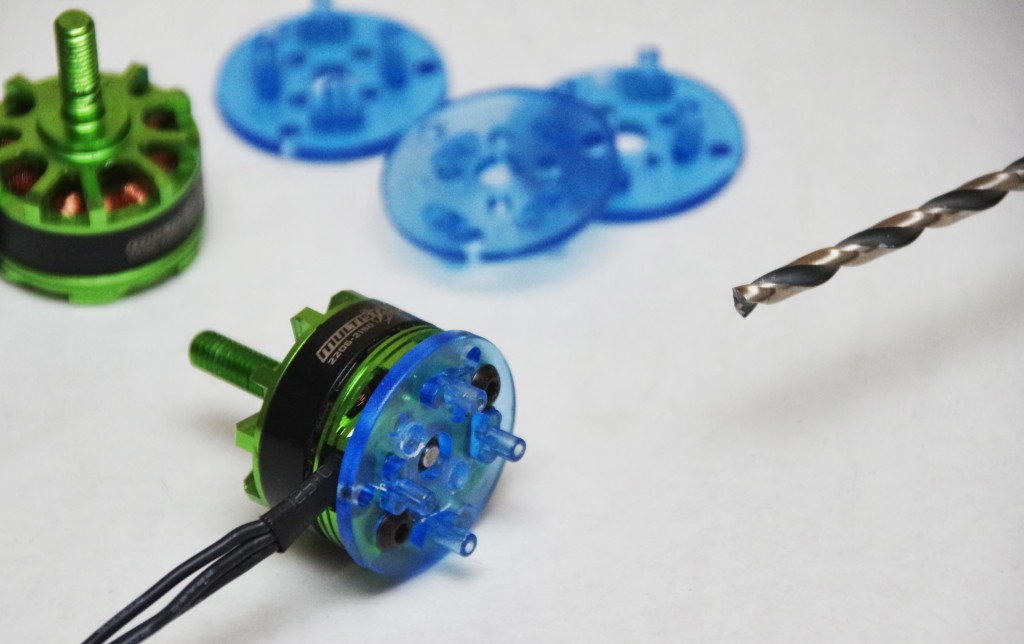 We were a little put off to find that he mounting holes of our Baby Beast motors did not align with any of the pre-drilled holes in the small motor discs. We thus had to drill new holes in these discs to get our motors to mount up to them; we went ahead and opened up the center shaft hole as well, in order to provide a little extra room for the motor bearing, c-clip and shaft. Before we over-drilled the center hole, it felt as if the motor disc was inhibiting the motors spinning freely, possible because the discs were putting a little lateral pressure on the bearing and motor shaft. 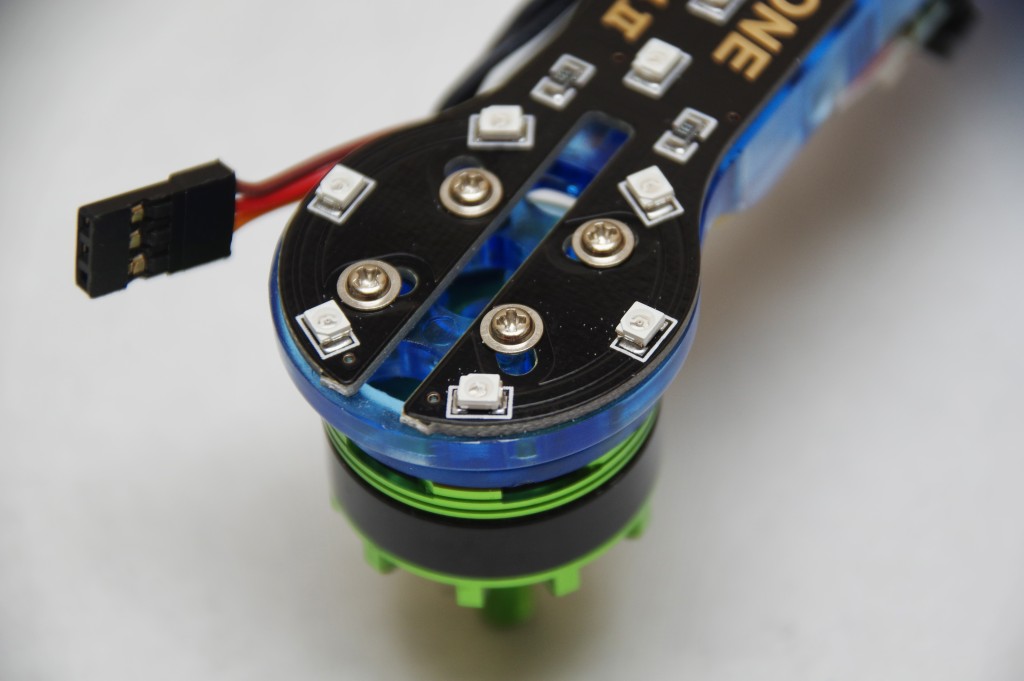 In the photo above, the motor has been mounted to the disc and attached to the arm using the included small washer equipped sheet metal screws. Getting these small screws lined up with the stubs of the motor mounting discs was probably the hardest part of the entire build. Bad eyesight and inferior bench-top lighting only exacerbated the process. Unfortunately, we failed to discern that the landing legs, should you plan to use them, must be mounted BEFORE the motors are anchored to the arms. And we had planned to use the landing gear. And so we had to repeat the hardest mechanical part of the build … again. And it was even more difficult the second time around, with the landing legs protruding upwards in the middle of the four holes. 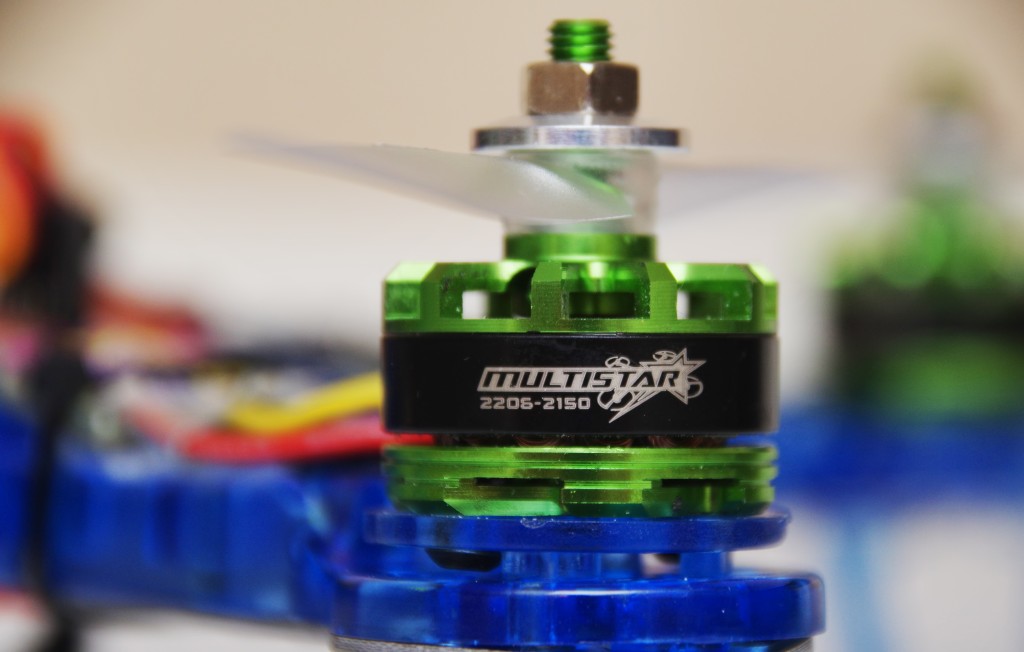 The Baby Beasts used in this build are the original version of these motors. MultiStar has since revised them, adding a nice looking spinner nut to the package. The four included clear props slipped over the motor shafts perfectly, with no need to fuss with reaming the props out or adding prop-to-motor-shaft plastic bushings necessary. 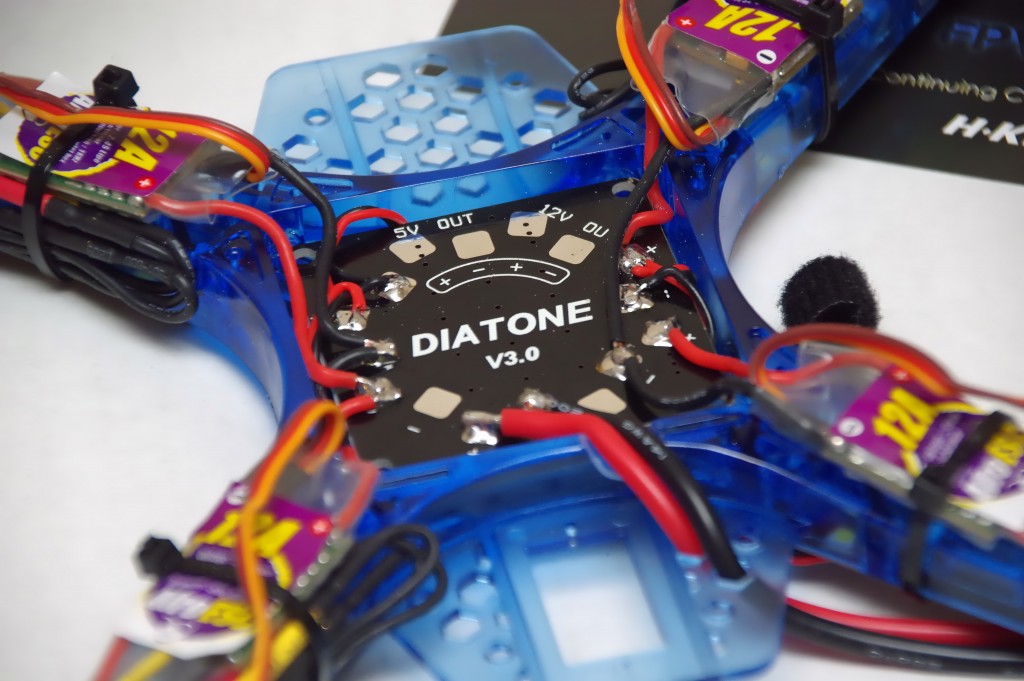 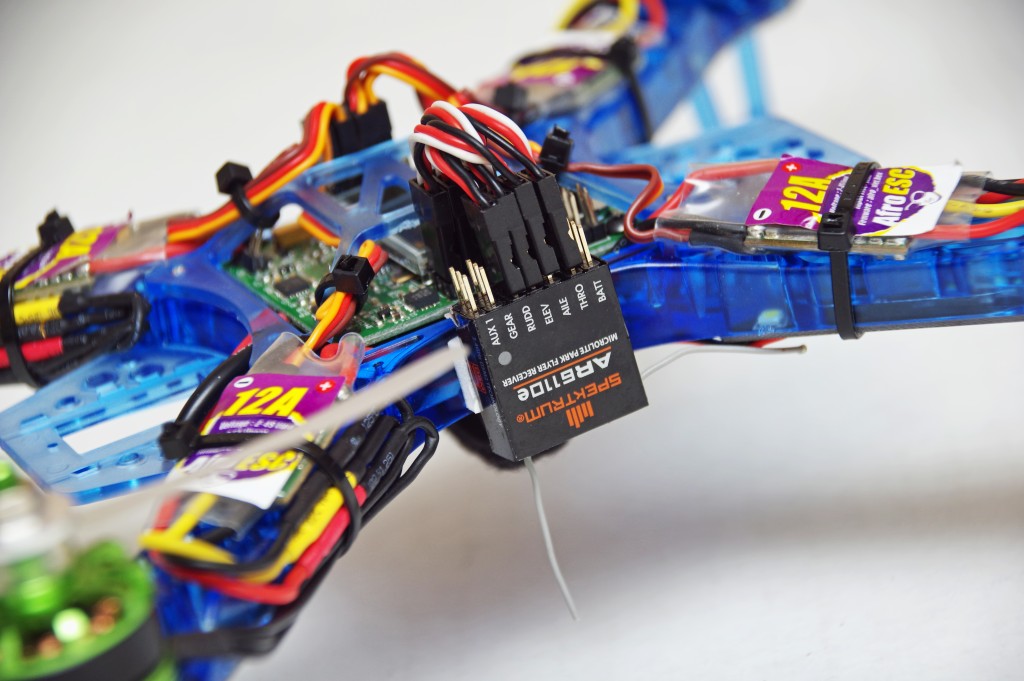 We were flying a well used Spektrum AR611oe on the frame from which we robbed the motors and ESCs for this build, so we grabbed it and pressed it into place on the side of the frame using double sided tape. We have a couple of the HobbyKing OrangeRx R410X four channel receivers on order however and plan to switch over to a CPPM interface when they arrive! Less is always better when it comes to wiring! 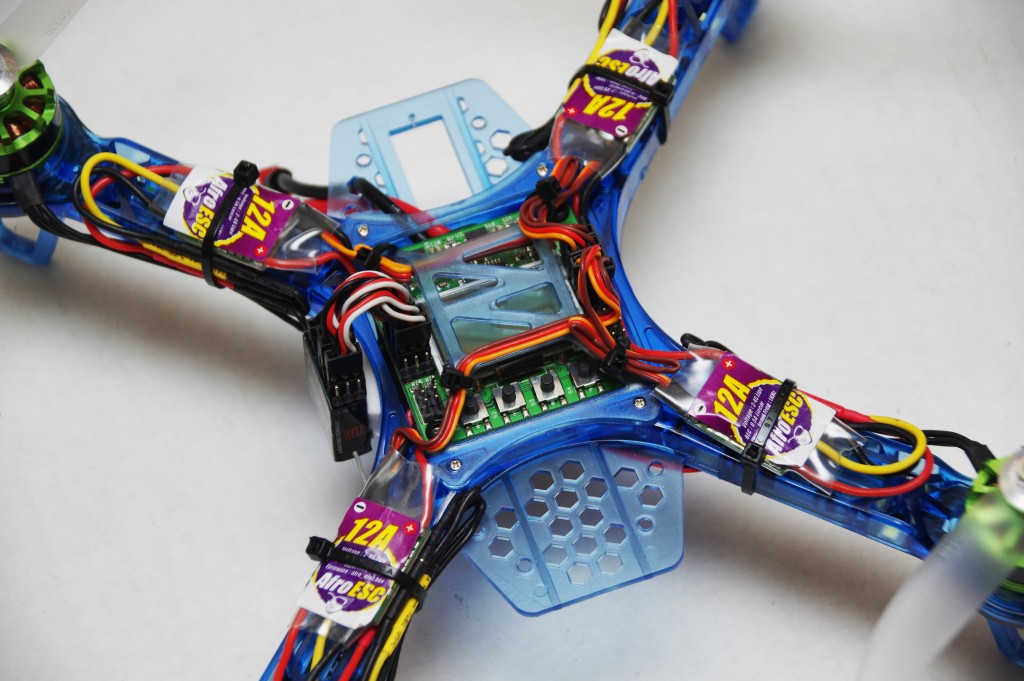 It took a little careful manipulating of the ESC wiring but we were able to wriggle the flight controller protective card cage down and into place over out KK board. 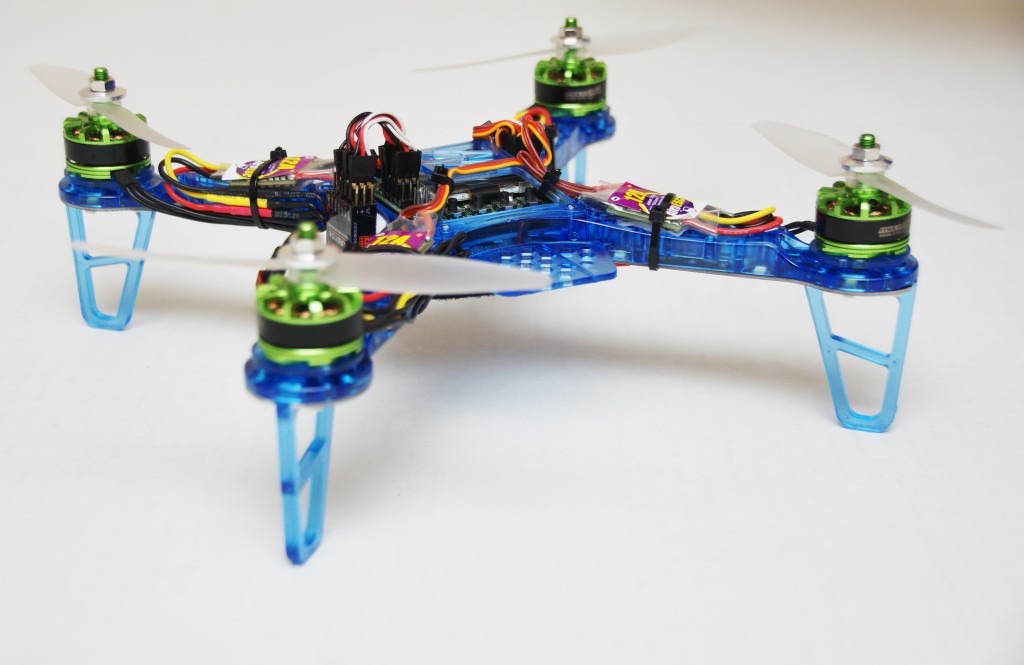 And there you have it! One Blue Ghost Edition HobbyKing FPV Racer ready to power up! We will initially be flying ours in LOS (line of sight) mode until we feel we have it all tuned up and dialed in. Then it is back into the shop for the addition of a camera and video transmitter. Oh, and we need three pals to grab the other three colors so we can get some real races going! It is time to turn out the lights now and see what all of those LEDs do to the translucent polycarbonate blue colored frame and clear 5×3 props … 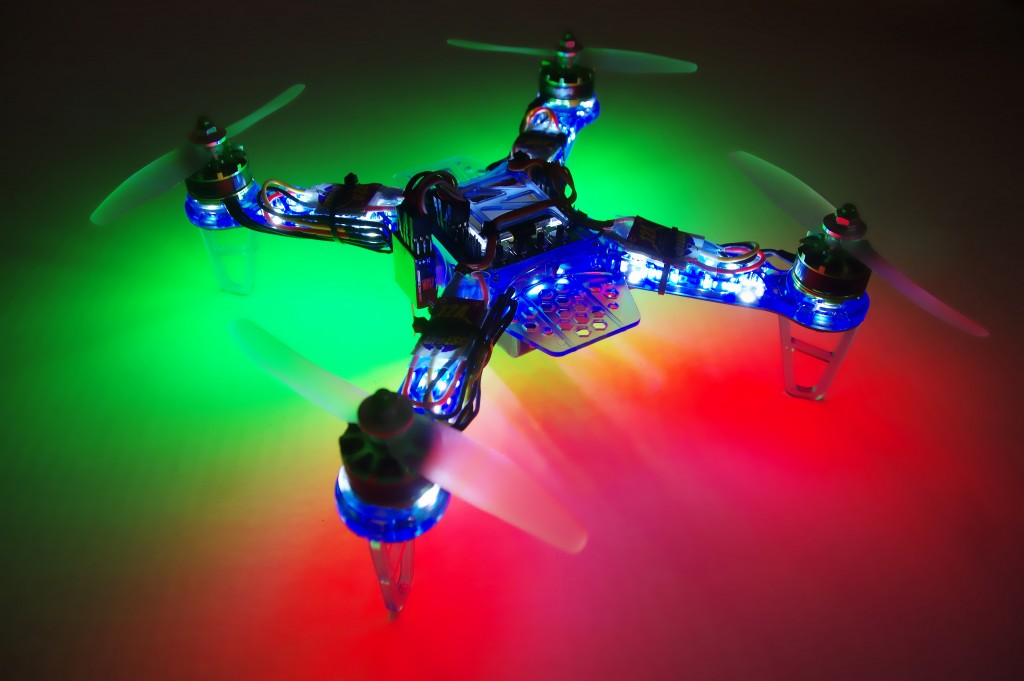 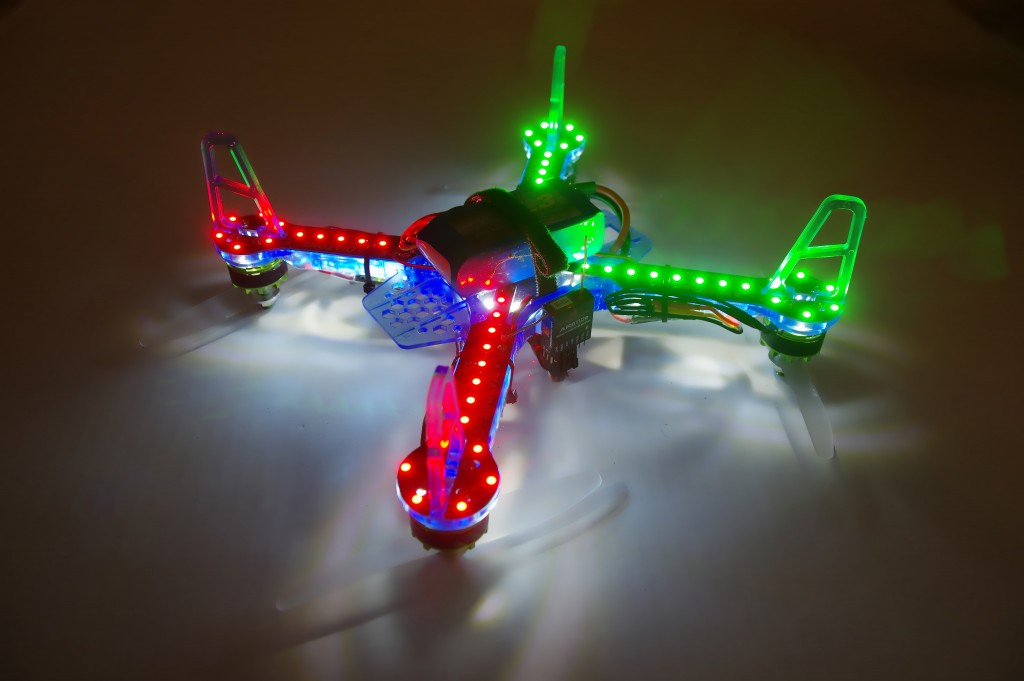