Up until recently, the monster manufacturer of drones hadn’t really done much on their own in the way of goggles or headsets, having relied on Zeiss or other such optics companies to provide their wares for a combo. We got to check out the first incarnation of an actual DJI branded headset last year when the Mavic was released, but this new set of goggles is leaps and bounds beyond that initial foray into FPV for themselves. We’re sure there will be plenty more cool gadgets and machines going viral from the NAB 2017 show, but this one really caught our eye and the eyes of many more for one single reason … flight capable entirely by head tracking! 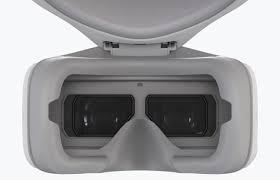 We’re sure you’ve heard that word before whereas FPV is concerned, but that was always a servo actuated 2-3 axis setup that was large and bulky. Such designs were meant to only give the pilot (or viewer) the ability to pan, tilt or roll their head to point the camera in whatever direction they looked, but the model said head tracker was mounted to still relied on two thumbs on the sticks for flight input. Head tracker systems of this variety were also often difficult to setup, having to mount an accelerometer unit to the headset, then get everything to jive, then make sure your servos were all setup properly and then you might get to enjoy it. Not so with these beauties from DJI. It’s ready to pair to your DJI drone and use right out of the box. 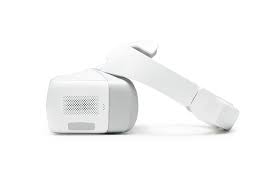 So basically once you’ve got your drone up and where you want it, engage one of several flight modes (Fixed-Wing, Terrain Follw, Active-Track and TapFly) in Head Tracker mode and let your neck do the flying. Look left and the drone flies left. Look right and the drones flies to the right. Not only that, but you can also command the camera in addition to the drone … at the same time. There is a touch pad on the right side of the Goggles that you use to navigate through the menu and confirm your selection. With a bit hefty of a street price (as of now), you really have to examine all the cool features you’re getting with theses goggles and exactly who you’re getting it from. Who would have ever thought we could launch our machines, fly a mission simply by head movement, still have complete control of camera functions and return to base; all with out taking the goggles off!?

Well, I guess it’s safe to say that the innovative and forward thinking folks at DJI have knocked it out of the park once again. These new Goggles pack some amazing features into a small and easy to use package that will not only simplify drone flight and capturing of aerial medial; it will revolutionize it.