Words and photos by Matt Maziarz

The Star Wars Imperial Aratech 74-Z Speeder Bike drone is a must have for any fan of the movies, whether you fly drones or not. The scale details are absolutely amazing and the flight performance is on par with drones from reputable hobby suppliers that are fully rebuild-able and much more expensive. Not only that, but this drone features sensors for altitude hold capabilities indoors or out and is pretty darn quick in experienced hands. 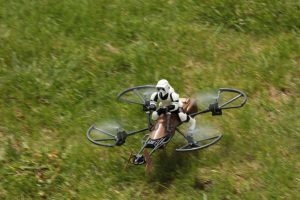 Those who are more than familiar with the franchise are also well familiar with the Aratech 74-Z Speeder Bike. While in the movies, it didn’t make an appearance until Return of the Jedi, it was actually featured in many of the earlier “episodes” before the recent prequel releases. The staple reserve of the Imperial forces for recon and ground patrol, the 74-Z is fast, nimble and deadly in the right hands and now you can be blasting past rows of trees and vines on your own Speeder Bike drone thanks to Spin Master and Air Hogs. 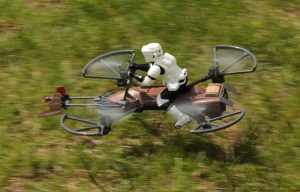 The Speeder Bike package contains everything you need to get into the air and performing your own chase scenes on the surface of Endor. The manufacturer includes the drone itself, the radio/charger, a small USB cord and manual.

>> Transmitter doubles as the charger for the drone

>> Not a single replaceable part available … one and done

>> Outdoors only in little to no wind

As a child of the late 70’s and early 80’s I, like most other fellas the same age, am a die hard Star Wars fan. Of course, my first few times watching the first two movies left me with more questions than answers, being such a young lad, but when Return of the Jedi came out in 1983, I was about as pumped as an 8 year old could be to see how the rebels would defeat the evil Lord Vader and the Emperor. Of course, I was all smiles when the good guys won and was all giggles about those stupid, furry little creatures (don’t get me started), but the one thing I was most pumped about in the new movie was the Speeder Bike chase scene with Leia, Luke and the Imperial Scout Troopers. That scene alone sticks with me to this day and is probably the reason I love woods cruising with my FPV rigs so much. Now that I can fly a drone modeled ridiculously well after such an iconic vehicle, my only other wish is for a functioning light saber.

Charging the flight battery is as simple as stuffing six AA batteries into the radio and then plugging the charge cord into the belly of the drone. Oddly enough, there is no polarity to the charge lead or corresponding plug on the drone. The light on the radio will flash red while charging and turn solid green once complete. My initial (and subsequent) charge took 25-30 minutes … kind of long for a battery that can’t be swapped out, but oh well. I opted to use the USB cord, plugged into the 5v out on my Graupner Polaron to save some life in the AA batteries.

Once ready to rock, I grabbed the Speeder Bike and radio and headed outside. It’s certainly small enough for flying indoors, but I wanted a nice soft lawn to ditch onto if anything went awry. After turning the radio on, I switched the drone on and placed it flat on the grass. Once it was armed and ready to fly, I bumped the throttle to about half and the bike lurched skyward, assuming a level hover right in front of me. Two first impressions … Holy smokes this thing is quiet and holy smokes this thing is stable. I popped the throttle again to gain some altitude and nothing happened so I landed. WTF?!

Turns out, I had the radio switch on Height Lock, where the throttle is only used for takeoff and landing. Like they always said, haste makes waste and I rushed out the door without checking the radio over per the instructions. Either way, I had the Speeder Bike back up and ready for action after disabling the Height Lock function. A couple quick pirouettes and I began some forward flight. The drone will lean quiet a bit will full forward elevator, which looks awesome with the rider assuming the pursuit stance. Carving figure-8’s was not only effortless when coordinating rudder and aileron, but it felt like a much more expensive machine while doing it. I was also surprised with how quick the Speeder Bike can get when you really push it.

In Height Lock, the Speeder Bike keeps a consistent altitude thanks to the dual sonar sensors on the belly of the drone. Simply flip the switch to “locked” and mash the throttle to takeoff. The bike will assume a level hover four feet or so off the ground, awaiting your next command. You still have full control of the rudder, ailerons and elevator, but to vary the altitude of the Speeder Bike, you have to use the two up/down arrows beside the Height Lock switch. Also, while cruising in Height Lock mode, you can press the big orange Jump button above the right stick to pop the bike over an obstacle. Again, pretty damn snazzy for a 40 dollar drone.

I was suspect of the advertised 200 meter range of the radio system included with the Speeder Bike (who the frank can even see LOS that far?!), so I had to push the envelope a little. Heading off to the local ball field, I was able to fly from home plate, way out over the center field 400 foot marker and back, without a single glitch. On the way back, I opted for slalom approach rather than a straight line, for which I paid the price. At such great distance, I lost orientation with these old eyes and had to plop it down. I was worried that I might have done a number on any one of the plastic detail parts or Scout Trooper, but nothing was broken or even bent. The plastics used are mighty flexible and even if your happen to decapitate or explode your rider alla Princess Leia, you can always glue him back together with some foam safe CA glue.

Subsequent flights in the back yard proved to be the most fun. I strapped a Spektrum AIO camera/vTX unit to the front of the Speeder Bike and was blasting past trees just like a Jedi (I really need to get a few of the local club guys to get one and do the same so we can race FPV Endor style). Later in the afternoon, the wind picked up a bit and I quickly realized the limitations of the little Speeder Bike. With all the plastic fairings on the bike and the foam Scout Trooper sticking up like a mast, the drone does not like wind. It is extremely lightweight and even though the onboard accelerometers will keep things level, anything more than a 4-5 mph breeze was enough to take control of the drone from me and put it into the hands of Mother Nature. More than once, I had to ditch it in the neighbor’s yard because I wasn’t able to penetrate the mild wind.

All I gotta say is, for 40 bucks the Star Wars Imperial Aratech 74-Z Speeder Bike is a must have drone for any Star Wars fan, any drone fan or any Star Wars fan who flies drones. The thing looks plain awesome and the performance isn’t bad at all for something you can buy at Walmart. A couple sub micro AIO FPV units up the fun factor immensely and even though you can’t buy replacement parts, the flexible and resilient airframe will take some hits and keep doing what it’s supposed to. Spin Master also makes a battle set with infrared lasers that contains an X-Wing and Tie Fighter as well as a couple different Millennium Falcons. Check em all out to get your Star Wars Drone fix.