While RISE is a relatively new name in the RC game, drones are their one and only focus, so they’ve been honing their machines since the original release in the RXD 250. The Vusion House Racer is the cure-all for those trapped indoors due to weather, work, agoraphobia or any other suck malady. It’s a 125mm (actually closer to 120mm) brushed race machine packed with all the FPV essentials, including a flight controller with three independent flight modes. The coolest part is it’s a bit bigger than most other custom-tailored indoor rigs, but it’s also a heck of a lot faster than nearly any other brushed drone built for FPV action.

RISE serves up the Vusion House Racer in two different manners: an RTF version as reviewed here as well as an FPV ready version. The RTF is loaded with everything you need to get into the air and flying from the headset on the first pack. It includes the drone itself, a 2.4GHz 6-channel radio, flight battery, FPV monitor with DVR, headset for the monitor, a spare set of props and a screwdriver for the frame screws. The FPV ready version just includes the drone, battery and charger (both House Racers are SLT compatible, so you can use your favorite Tactic radio with them).

The RISE Vusion House Racer RTF Race Pack is an all-inclusive package. It not only includes the drone itself with camera and vTX as well as the radio, but also includes the Tactic FPV monitor that can be mounted to the radio or slipped into the headset and a spare set of props. Of course, the flight battery and charger are included as well as batteries for the radio, so you’ll need nothing other than your two thumbs to get into the air and flying FPV for real … for far less than 200 dollars!

>> Complete FPV package without anything else needed

>> Great performance out of a tiny machine

>> 100% designed, built and supported by Hobbico

>> Grass is a killer … especially with the inverted motors

>> A little too fast for some indoor venues

When I first saw the size of the House Racer, I knew I was in for a thrill ride. However, the connotation of the name itself had instilled in me expectations of something much slower and smaller. The fact of the matter is, the House Racer is bigger than most indoor machines and is also quite a bit faster than most other brushed rigs, but that’s all good as far as I’m concerned as such speed and agility allow this model to venture outdoors as well. A word of advice though, keep it in Mode 1 if you have anything other than a chateau with long, wide open expanses for a domicile … at least for the first flight or two.

As I mentioned before, starting off slow with the House Racer is the key to success if your living quarters are fairly humble size-wise. My 900 square foot cape has large rooms, but no hallways or openly adjoining rooms to speak of, but my pride had me thinking “bah, I’m an experienced pilot. I don’t need no stinking Mode 1!” Well, needless to say, my first flight lasted exactly four seconds before the humbling walk of shame with me muttering about how darn fast the House Racer was. I was so used to flying my Tiny Whoop and Nano QX at full tilt through my kitchen, into the dining room and then back out to the living room again that I employed the same throttle burying technique with the House Racer, to no advantage.

The House Racer is fast for sure, so I flipped back into Mode 1 and started things a little more cautiously through my makeshift race course. There are lots of hard 90 degree turns so I crept through the first lap and was glad I did as the stock monitor setup fed me quite a bit of interference once a couple walls and rooms were between it and the drone. A quick repositioning into the center of my course allowed for decent image transmission throughout the full run of the course.

Mode 1 – Bank angle limit of 30 degrees: Docile on the cyclic controls, but can also get the House Racer scootin’ pretty darn fast. In this mode you have full 6-axis gyro and accelerometer assistance, giving you easy flight with auto-leveling. My first few batteries in my house were flown in this mode until I got a little more familiar with the handling characteristics.

Mode 2 – Bank angle limit of 45 degrees: A little snappier on the elevator and aileron channels, but noticeably faster in a flat line. Now, the angle limiters are increased so you can pitch the House Racer further forward and open the big motors up for some blistering runs. Once I got familiar with my race course setup, I was all about Mode 2 while cruising in my house.

Mode 3 – No bank angle limit: For you experience FPV racers and flyers out there, this is your Rate Mode. There is only the 3-axis gyro feeding stabilization to the House Racer in this mode, but no self-leveling from the accelerometers. Pitch the drone forward and it will stay in that orientation until commanded otherwise. My house was way too small for Mode 3, but I did open it up and use it once outdoors. Other folks with larger indoor areas and/or better thumbs than I will surely be able to utilize this mode for indoor flying.

Auto Flips – Like many other RTF drones, the House Racer can do auto-flips with the push of a button. The House Racer does it as well in Flight Mode 2, but I was a little perplexed when after reading the instructions that outline the procedure contradicted what I was actually seeing with my own eyes. The manual explains that you need to push and hold the “Flip” button on the left side of the radio, but that button is actually labeled “Picture” (The Vusion House Racer RTF uses the same radio as the Vusion Extreme Racer). Once Hobbico support cleared that up, I was flipping like a pro, though the little House Racer does lose a bit of altitude when performing such aerobatics, so just keep a little distance between it and the ground when flipping.

Crashing: The House Racer is about as durable as any other mini/micro lightweight FPV machine. However, even with the prop guards added, there is still a good potential for blade strikes. After a few bumps with a makeshift gate (a café table’s legs) the House Racer would always end up on its lid. Once we employed a little rudder to allow the prop guards to take the brunt of the blow in such scenarios, the model would most often stay upright and aloft. The bottom line is, I crashed a lot and I crashed hard, but the House Racer showed no ill effects aside from a bent landing foot or two that were promptly rectified with a little elbow grease.

Race Gates: Unless you live in a cave, chances are you’ve seen at least some of the cool videos of folks flying in their homes with all sorts of gates borne from their own imagination (or 3D printers). RISE and Hobbico have you covered though, with their Race Gate system for the House Racer. For $40 you get two hoop gates, one logoed bridge gate and a turn flag. They also sell LED lit versions as well as arch gates and elevated hoops. I turned to Amazon.com for some LED ropes on the cheap and setup my own course using the Race Gate System and a bit of ingenuity (be sure to check back for a separate feature on how/where to get the setup I built). 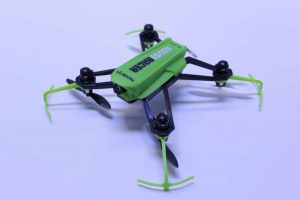 I got to fly my House Racer, in the house, as well as a few other locations. I used my side yard at night, lit with my LED gates, which was awesome … especially when I could use the lost model beacon to find my downed machine in the dark … until I got close enough to see the red LED on the drone (just watch out when flying over grass at night as it’ll grab the House Racer with haste. I also got to fly quite a few packs over the turf track at The Hobby Hangout in New Milford, CT, abusing their drone race track for all the House Racer was worth. I must say, the model really excels in larger areas and is perfectly at home outdoors with little to no wind.

I think it’s safe to say that I’ve been fairly impressed with just about every release from RISE. From the RXD 250 up through the Vusion Race Pack, the House Racer is no different. It allows would-be FPV pilots to get everything they need to jump into the pilot’s seat for $179.99 and it surely doesn’t skimp on performance for those with more seasoned thumbs. Best of all, it’s distributed by Hobbico and that comes with a huge piece of mind in the form of support after the sale. Oh, and one other thing. Just because it’s called the House Racer, you can still buy one of these awesome little rigs if you live in a condo, apartment, your mom’s basement or a cave (assuming said cave has a USB outlet to charge the battery). Be sure to check back in for our FPV video.