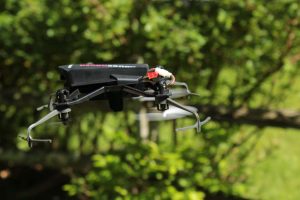 So, I’ve been beating the ever living bejesus out of my standard Vusion House Racer, when low and behold, a Limited Black Edition shows up at my door. Initial inspection (and a quick call to my product guru, Natalie Rodrigues) defined that this was, indeed, the same awesome machine I had grown to love and abuse, yet was cloaked in all black and gray. Folks who know me are well aware that I do not screw around and that means I always cut to the chase. Yes, the House Racer is an amazing machine and for the RTF version, you get a hell of a lot of FPV drone for not that much cash. My one point of contention, though, has always been that the damn thing is too big and fast for most indoor venues. That’s not a bad thing, I just think the name might carry too much denotation when prospecting for new buyers.

Back to the point at hand, the new Black Limited Edition House Racer is just as cool as the original, but it looks more the “drone racer” part than the “big box toy” part. I am no expert, championship worthy FPV pilot, but I am also no slouch and I can tell you that (lost memory cells aside) I have never cartwheeled an FPV rig so violently and so often as I have the two House Racers. The fact is, though, I have yet to break a single part aside from the motor guards, which retail for less than 2 bucks for a four pack! Yes, the downward facing motors suck outdoors if you “land” on anything other than a smooth surface, but the model screams to be flown outdoors.

The speed, agility and multiple flight modes are exactly what the doctor ordered for training pilots, not to mention the supreme durability. I, for one, firmly believe that the inherent nature of the House Racer to be flown outdoors is a further selling point to the model itself. For less than 200 smackers, you can get an RTF rig that is tame enough to fly indoors, yet fast enough to tackle any outdoor course you bestow upon it. The Limited Black edition only takes the cool factor a step or two further, by giving the House Racer a whole new aesthetic value. Worried about planting your darker, new House Racer into a bush outside and not being able to find it? Simply turn the transmitter off and follow the beeps (like I did in the video).

RISE and Hobbico are serving the Black Limited Edition House Racer up in FPV-R (FPV Ready) fashion, meaning you’ll need to supply your own goggles, 6+ channel SLT compatible transmitter or any such capable transmitter that can run an AnyLink module. Check one out for yourself today, whether you’re just looking to get into the FPV game or are a seasoned pro who is looking for the perfect indoor/outdoor basher. Be sure to check out out initial runsown of the House Racer over HERE.