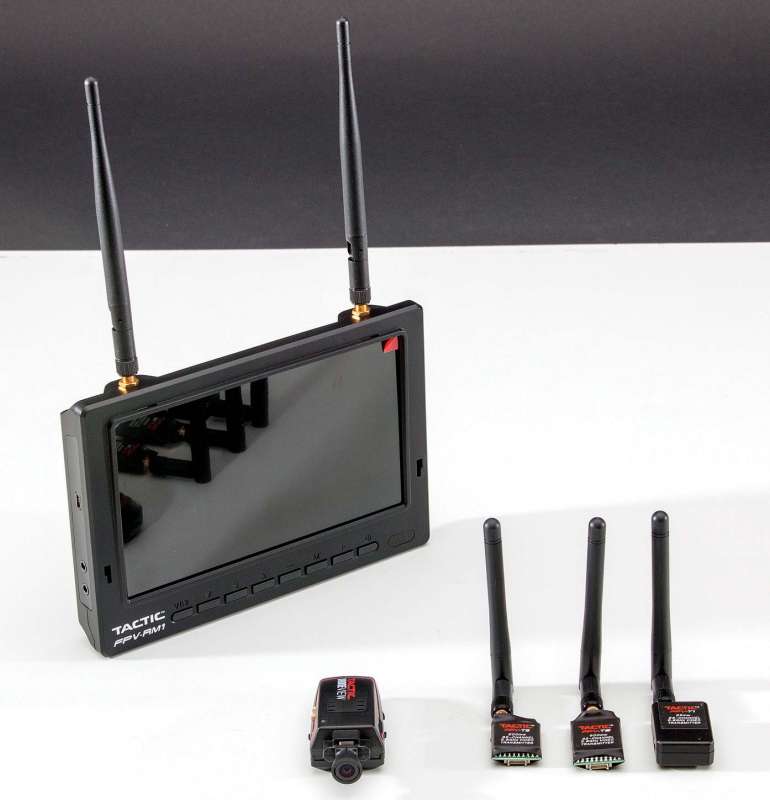 One of the hottest trends in the drone world for 2015 was undoubtedly FPV racing. This fast and furious form of flying has taken the UAV community by storm on a grass roots, national and even international level. Heck, the owner of the Miami Dolphins invested a million dollars in a Drone Racing League. MultiGP and its founder, Chris Thomas, are well-known in the FPV community all over the globe and the world wide web, hosting, organizing and covering races nearly every weekend. The fine folks at Hobbico took notice of all the fervor surrounding FPV enthusiasts and released their own line of FPV equipment under the Tactic badge.

From a ground station, to transmitters and even an HD camera, Tactic has got you covered, whether you’re racing FPV on small courses or looking to stretch the legs of your long range model. The crown jewel of the FPV lineup thus far, is the seven-inch monitor that also doubles as a diversity receiver. The 1024×600 HD display pro- duces great images and the monitor can be used as an all-in-one ground station, including an 1800mAh 2S LiPo for power. The 22 independent channel selector means that if your VTX is somewhere on the 5.8GHz band, chances are, you’re good to go with this unit. The monitor comes with a number of different adapter cables as well as a sun shield.

Tactic also just unveiled a series of 5.8GHz video transmitters. The offerings are available in 25, 200 and 600mW varieties, so unless you plan on flying to the moon and back, they’ve got what you need for your FPV jaunts. Each transmitter comes with adapter cables for traditional FPV cameras as well as USB style adapters for action cams. The 25mW unit features a hard case and 22 channels while the 200 and 600mW units are enclosed in shrink wrap, but also come with a heat sink and offer 32 channels. Each one also comes with an antenna and they can all operate on anywhere from 7.4-22.2 volts, so no ma er what sort of over-powered rig you’re running, these transmitters will all work out great.

Lastly, Tactic released the DroneView FPV camera. However, it is meant for many, many other uses than just on drones. It records in 720p HD or shoots at 1MP and can be set
up for remote operation using the included receiver wires. Tactic includes a 4GB micro SD card, but up to a 32GB card can be used for those extended flights … or bike rides … or half-pipe action … or boating trips. The camera can also be linked via WiFi to both Android and IOS devices for actual FPV footage displayed right on the phone or tablet. It has a 40-45 minute runtime on a single charge and the tiny size and light weight means that it can even be used on mini machines.

It’s nice to see such a reputable and well- known hobby distributor as Hobbico stepping up to the FPV plate. Now, we can all turn to Tactic for our FPV needs and make sound purchase decisions based on decades of superb customer and product support. Now, if we only had a few sets of goggles and tiny FPV cams that bear the Tactic moniker …