Traxxas Aton: Worth A Second Look Follow Up Flight Review

Traxxas had made a few brief forays into the rotary winged arena, but mainly in the small, toyish realm. With the Aton, fully equipped with a GPS enabled flight controller and a wide flight envelope, Traxxas now had a viable contender to compete with the larger, drone-only manufacturers … but which one(s)? Well, in it’s simplest form, all of them. Once again, if you’re familiar with the Traxxas Slash 4×4, you’ll know what we’re talking about when we say the Aton is the perfect Sport Utility Drone for any pilot, of nearly any skill level and in nearly any facet of the drone world. The Slash 4×4 is perfectly at home, in the backyard tearing up sod, but it can also be track prepped for club racing duties. Similarly, the Aton can be fitted with a gimbal and HD camera for amazing aerial media capturing, or it can be made FPV ready and opened up in Expert mode for speeds eclipsing the 60 mph mark while wearing the goggles. The Aton is a true “bash” approved model with its durable modular design and parts/product support that is second to none.

The Traxxas Aton has been out for a while now, but it’s really worth taking a second look at, especially given the low price it now sells for. You’ll not find the same compliment of features and capabilities in any other drone on the market and backed with such awesome customer support. The Aton can giddee-up to the tune of 50+ mph right out of the box, it is fully GPS enabled, it can store or change Home Points for Return To Home convenience and it has an “Air Brake” that can be used as a bailout function. For a smidge under 300 bucks for the base model sans gimbal, you’re not gonna find more machine for less money anywhere.

With our “Fixed Mount” RTF version, the package includes the Atone drone itself, the transmitter, 3000mAh 3S flight pack, smart charger, landing gear, fixed camera mount, spare blades and batteries for the radio. For 80 bucks more, you can get the same machine in the “Plus” trim with the 2-axis gimbal and 5000mAh flight pack.

Getting into the air with the Aton is easier than any other GPS enabled drone out there. Simply fire up the radio, plug the battery into the Aton and wait for a full row of green lights on the status bar. No GPS dance to calibrate compasses or anything of the sort. Before arming the motors though, you need to choose one of three flight modes; Film, Sport or Expert Mode. 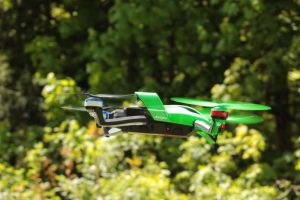 In Film Mode, the Aton feels sluggish, but that’s the idea. For capturing aerial media, you want nice smooth and fluid movements. Herky jerky flight can lead to nausea-inducing footage and that’s no good for anyone. Film Mode feels not unlike a machine with really low rates and loads of expo, but again, that’s exactly what you’re going to need to get those killer shots and clips.

In Sport Mode, the Aton gets a whole lot more fun. Dual rates are greatly increased and the stick response around center is markedly improved for aerobatics and sport flying. With a quick punch of the throttle, the Aton will lurch skyward with pretty damn impressive vertical prowess for an RTF of the 400mm(ish) variety. Flat line speed is also refreshingly crisp and with the assistance of the 6-axis stability system and the Air Brake, you can feel free to cut loose without worry of damaging your Aton.

In Expert Mode, the accelerometers are disabled, allowing for full travel in any direction without the aid of self-leveling. That means you can push you Aton to extreme pitch and roll angles for all out blistering speeds and aerobatics. It’ll flip and roll like an FPV rig, but not nearly as fast given the response time of the electronics and sheer size of the drone itself. Basically, if you’re an avid FPV race pilot and you’re looking for the perfect GPS enabled machine to bust some incredible freestyle flights with, look no further than the Aton. 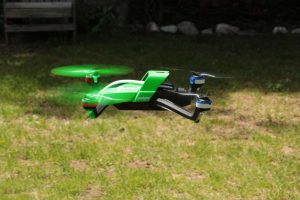 Auto Flips are not an anomaly in the drone world, though they are usually reserved for smaller, more toyish machines.  One would think that such a novelty would not quite work on a larger, heavier machine such as the Aton, but one would be wrong. Forward, backward, side to side or any combination thereof is easily achieved after pressing the top left button on the transmitter and then commanding the Aton as to which direction to flip with the right gimbal stick (joystick). There is a little altitude lost, but the Aton pops itself up a bit before each maneuver, so it isn’t more than a foot or so.

Flight Link App from Traxxas offers a world of possibilities with the Aton. Not only can you adjust the rates in all modes, but you can also alter the speed of the drone in Film Mode, increase or remove the factory geofence and altitude limits, adjust or turn off the LED lights, preset how many flips are performed when the Auto-Flip function is engaged and more.

Though I didn’t use a gimbal or action camera on the Aton (I didn’t even use the landing gear legs at all), I gave it a pretty hardy workout. After a good bit of LOS flying with it, I figured it was time for a camera and vTX. I’ve been pretty deep into FPV flying of late, so strapping the 3.3GHz Finch system from Electrify RC only seemed natural. I could send the drone far flung, behind and around obstacles without worry of signal loss or losing control of the machine per the niceties that are Return to Home and Air Brakes (it is worth mentioning that if flying the Aton below 45 feet, engaging the RTH function will send it to that exact altitude before heading back to the home point).

My local flying field is within a state park in CT and there are loads of trails laden with hills, ravines and steep inclines. Such terrain proved the perfect layout for low level cruising with the Aton. More than a few times, I got disoriented while speeding through tight trails I hadn’t yet been down, but a quick press of the top right button settled the Aton until I was ready to resume my run. I must say that the 3.3GHz system performed as advertised and when strapped to the Aton, it provides all the blood pumping action that raw FPV racing does, but with the added convenience of superior obstacle penetration.

Likewise, the Aton more than fed my need for speed, but never had me sweating bullets for fear of a hard crash. I did brush a few trees and biff the ground when I got a little unsettled, but never did any more damage than a broken prop or scuff on the canopy. Next time I head out to the club field, I’ll be sure to push it a little harder, knowing that the fully modular design of the Aton and a multitude of sources of the brick and mortar variety have parts will keep my machine in tip-top shape.

Well, I gotta say that I am quite impressed with the Aton after taking a second closer look (and that’s without even strapping a gimbal and camera to it). From performing airplane style aerobatics LOS to flying behind barns, trees and mountains with the Finch FPV setup, the Aton never disappointed me whatsoever. Whether I was flying high altitude over the field or low and fast through tunnels sculpted from foliage, the features and capabilities of the Aton had me completely at ease so I could just concentrate on “bashing” my drone and having fun. Does it keep up with my Thrust UAV Riot 250R or can it produce the same footage as a DJI Inspire 1? Nope, but it can do it a bit of both, which neither of those other two machines can do and it does it all at a great price with awesome support after the sale. Be sure to check back in a bit for our FPV flight video and full shake down of the Finch system.